Split between two homes: how divorce affects teens; how parents can make it less difficult

There are basic truths most children understand about the world. One plus one is two. A cat “meows.” A square has four sides. A family consists of two parents and children. However, these understandings are complicated for those who grow up with divorced parents. Their minds are plagued with the worries of custody arrangements, getting along with a new step family, remembering to bring clothes between houses and deciding which parent to side with in a fight.

There is a divorce every 13 seconds in America, according to Wilkinson Finkbeiner Family Law Attorneys, a San Diego law firm. By the time you are finished reading this article, over 25 divorces will have been finalized. One reason divorce is so high is the introduction of the no-fault divorce, a national policy first introduced in California in 1970, explains Griffith, Young & Lass Law Firm. The law allows couples to annul their marriage easily without having to cite a specific conflict.

Marin County has the highest divorce rate in California for a population of 250,001 to 500,000 at 13 percent, over three percent higher than California’s statewide average of 9.7 percent, according to Scott Family Law, a San Diego-based law firm. Surpassing both the state and county divorce rate, 24 percent of Redwood students self-reported that they have divorced parents according to a March Bark survey.

“Abby,” who wishes to remain anonymous, is one of these students, for her parents divorced when she was seven years old. Abby spent the majority of her childhood with her father due to a custody agreement that granted him the title of “primary caregiver,” even though he was not fully capable of taking care of her and her sister by himself, according to Abby.

“I used to spend six out of seven days a week with my dad, who’s a very difficult person to live and communicate with at times. We used to have my mom’s friends come stay at my dad’s house because my dad wasn’t seen as a suitable parent, even though he had more custody because he was the one who had more money,” Abby said. “He paid his lawyer a lot so that we’d end up spending a lot of time at his house, even though his house is a lot less stable than my mom’s.”

Psychologist Dr. Sheryl Hausman, Ph.D., specializes in the effects of divorce on children and teens. She believes that a lack of communication between divorced parents or putting the child in the middle of arguments puts unnecessary stress on their children. If children need to constantly remind their parents to pay child support or what time the other parent will be picking them up, they may feel responsible for the divorce. Children often feel pressure that they need to keep their parents’ relationship afloat.

“[Using the child as the messenger] is one of the big ‘no-no’s’ because that firmly puts the child in the middle and gives them a responsibility that the parents should have on their shoulders,” Dr. Hausman said. “I address that directly with the parents. I also address it directly with the kids, if that’s a complaint. [I] help the kids be able to stand up and say, ‘No, I’m not going to [relay information from parent to parent]. That’s your job.’”

Junior Bella Walejko has experienced a lack of communication between her parents due to her father moving to Los Angeles in Jan. 2019. After her parents’ divorce when she was three years old, Walejko’s parents did not have a close relationship, but her father’s move further exacerbated the divide.

“The only stuff [my parents] will talk to each other about is tax agreements and legal agreements. It’s very factual. It’s never anything like, ‘How are you doing?’” Walejko said.

Similar to Walejko, Abby is often the conduit between her parents’ communication, including the legal aspects, in order to make sure everything she needs is organized between them.

“I’m inserted in the middle of absolutely everything. I was just touring colleges over break and when I mentioned [college] should probably be worked out between [my parents], my father said, ‘I’m not going to speak a word to your mom about this.’ There are disconnects, and I have to facilitate the communication between my parents for everything, or it won’t happen,” Abby said.

Abby encounters the discrepancy caused by her parents’ refusal to communicate with each other, especially when it comes to her health. Three years ago, she was diagnosed with a gluten intolerance that she shares with her mother and sister.

“[My intolerance] has been challenging because that’s something my mom really understands and my dad doesn’t. Just now my dad is finally starting to buy gluten-free food. My sister and I would have to run out, and I’d have to pay [using] my money from work to buy food for us because we wouldn’t have any in our house. My dad refused to buy any, so that’s definitely added more complication into my life,” Abby said.

Health concerns are just one of the issues children of divorced parents have to ensure that their parents communicate about. Being the middleman for every aspect of communication can put the children in awkward positions, especially if the parents are on bad terms, according to marriage and family counselor Karen Stone.

Marriage and family therapist Dr. Dan Neutharth, Ph.D., has observed that if parents share negative feelings about their ex, the child feels obligated to pick sides.

“I strongly suggest to parents that [they shouldn’t] speak negatively of the other parent behind their back because it’s just so unfair to kids and to teens. It’s a ‘no win situation’ when one parent says something negative about the other person. You love both your parents, so you’re torn,” Dr. Neuharth said.

I’ve always been very much in a parental role for [my sister]. I used to do things like bathe her. I still cook in the house and clean the house. I’m really the only functioning adult there.”

Although both Abby and Walejko have grown up with this experience, many parents do not divorce until their children are in high school.

Michael Samuels, a local divorce attorney, argues that while it is difficult to endure divorce at any age, it is even harder for teenagers because in addition to being more aware of the situation, they have already developed their own personality and habits.

These worries are amplified when parents put too much pressure on their children. According to the American Academy of Children and Adolescent Psychiatry, parents and children often reverse roles during divorce as parents begin to turn to their children for support and comfort during this difficult period. Blurring these boundaries can confuse many adolescents on how involved they need to be in their parents’ divorce.

Dr. Hausman believes that it is important that parents make sure they are not putting too much pressure or responsibility onto their children. She reiterates that a divorcing couple needs to prioritize supporting their teens and allowing them to act their age.

“[Teens] need to have their own life. Kids are supposed to have basically one foot out the door, and they need a secure base at home to launch from. They also need to feel strong enough and feel that they have their parents’ support to be able to go onto the next stage of their life. The thing with the divorce is that at any age, kids can get derailed from whatever their basic tasks are at their age,” Dr. Hausman said.

As a result of the heightened pressure to help her parents, Abby learned to act more mature than her peers from an early age.

“I’ve always been very much in a parental role for [my sister],” Abby said. “I used to do things like bathe her. I still cook in the house and clean the house. I’m really the only functioning adult there.”

Dr. Hausman believes that the most crucial actions a divorced parent can take are to make sure their children know they are there for them and to fulfill the parental role.

“I want the parents to take on the parental role. I want them to be parents. I want them to work together as parents and to understand that just because they’re getting a divorce and they no longer have the same relationship, [it does not change that] they are the only parents their children will ever have,” Dr. Hausman said. 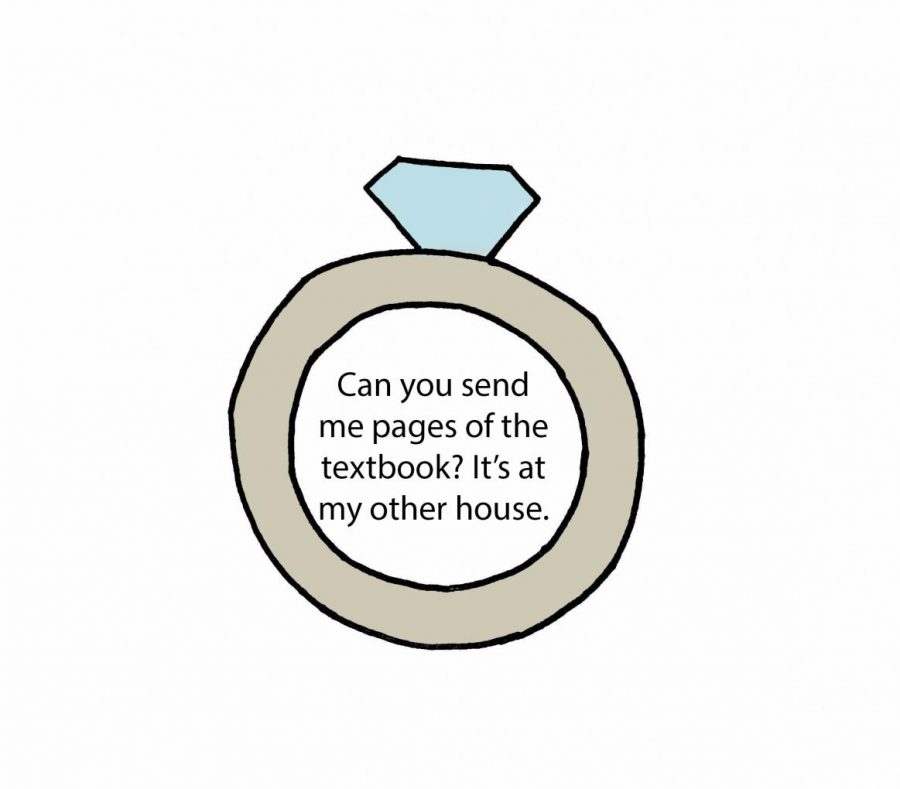 Gallery|5 Photos
Sol Ladetzky
Inside these rings are common phrases said by teenagers with divorced parents.