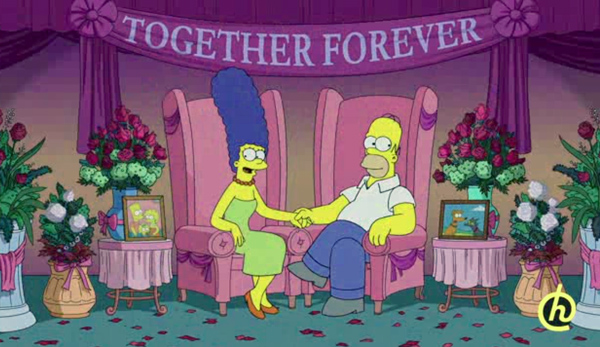 These beloved television couples will melt your (chocolate) heart

As the holiday of love approaches, those stuck at home binge their favorite television shows, envious of the beloved couples. Both wacky and sometimes unreliable, these couples show us the easy and difficult aspects of how to love. Although they may not always exhibit the most healthy relationships, the pairs are definitely entertaining. Unfortunately, this Valentine’s Day will likely not be one of dinner dates and nights in town. So, grab some chocolate hearts (and tissues) and ponder which couple would survive the pandemic by living vicariously through them.

As “Friends” dominated television in the 1990s, Ross and Rachel arguably became the most iconic “will they, won’t they?” couple. The partners have known and loved each other on and off since high school, so they understand one another and it is impossible to keep them apart. Ross and Rachel give each other dating advice (even with other people!) and still care for one another during their biggest fights. While it is sometimes questionable if they are right for each other (the “we were on a break!” debacle will probably never be resolved), we see that these characters are at their best when they’re together.

Arguably two of the most high maintenance television characters, the duo would spend a lot of time complaining during the pandemic. Whether it be that a paleontologist is not essential or that Central Perk does not have indoor seating, they would have to navigate a lot of issues in the extra time spent together. But they can handle it, because after all, he’s her lobster.

Jane and Rafael – “Jane the Virgin”

Sometimes all you need is accidental artificial insemination to fall in love. Navigating parenthood, ex-wives, celebrity fathers and murderous stepmothers, Jane and Rafael seem to have the world pitted against them. As they experiment with being co-parents to lovers to friends, it seems as though the two will never settle down. While sometimes it feels like the writers should just give the couple a break, the drama makes for a more satisfying ending (spoiler alert ahead!). Even though a child brought them together, it is their love for each other that gets them through all the mayhem.

While Jane and Rafael would have challenges being stuck inside with each other for months on end, like caring for a child and managing an empty hotel, they would definitely be the most adaptable couple. This pair has endured much worse on the show and staying at home together would be a nice change of pace from their action-packed lifestyle.

Everyone’s favorite quarantine binge, “Outer Banks,” allowed us to wish for our own  John B or Sarah Cameron as an adventure partner. Sarah Cameron and John B are the modern-day Romeo and Juliet and the epitome of teenage puppy love. Coming from different upbringings with their own slew of problems to tackle, an unlikely alliance turns romantic while they look for lost treasure. What makes this pair so special is their immediate emotional connection even with their forbidden love. The relationship will unfold further in season two, which is anticipated to drop this year.

Although the pandemic will probably not be mentioned in the “Outer Banks” universe, Sarah Cameron and John B’s daring spirit would be unfazed if COVID-19 struck their town. Even a natural disaster could not convince them to take a break from solving mysteries. While their relationship may not be strained, their refusal to follow stay-at-home guidelines would surely be frowned upon in town.

Fan-favorite couple Mitch and Cam had an interesting dynamic in their years together on Modern Family. Their relationship comes with a lot of bickering and disagreements to fit the sitcom’s heated, comedic nature. There is a widely held belief that opposites attract, and with Cam’s exuberant behavior contrasting Mitch’s understated temperament, the two make for a fiery relationship. A lot of viewers disagree with their pairing, arguing that the duo borders on toxic at times. However, for the sake of the show and entertainment, they work together and their interactions are the most fun to watch.

Because playful banter is Mitch and Cam’s favorite pastime and being cooped up in a house for a long period of time away from their family allows for a lot of it, hopefully, they would find another way to express themselves –– or at least take walks separately.

Homer and Marge – “The Simpsons”

While it is not the most conventional romance, Homer and Marge Simpson have maintained a marriage for over 30 years. When watching them raise their children, no matter how dysfunctional the family can be, you can feel love through the hysterics. Homer may be childish and incompetent doing almost everything, but his dynamic with Marge allows her to show her love by caring for him. Even when their arguments lead them to make rash decisions, the episodes end in an entertaining reconciliation that makes the fighting worthwhile.

Homer and Marge’s relationship seems on the rocks at some points, but it is nothing in comparison to their questionable parenting. Try to imagine them cooped up in a house with their children: it would certainly not bode well.