At 5 a.m. on Sept. 27, the smell of smoke wafted through 17-year-old senior Chris Kam’s bedroom window. Switching on his fire radio, he discovered that, sure enough, a fast-moving fire was burning up near the Bell Canyon Reservoir in Napa County, which would later become known as the Glass Fire. Chris quickly grabbed his fire gear, hopped in his car and reached the fire by 7 a.m. Without any formal fire training, Chris spent the next 12 hours in the flames in an effort to provide accurate and accessible information to those who would be affected by the fire, which he shared through his Snapchat story. When Chris returned home that evening, he received a notification that the Glass Fire had spotted across Napa Valley and exploded in the dry bush just four miles north of his own house. Chris, along with all of Rincon Valley, was forced to evacuate. Despite the mandatory evacuation, Chris returned back home every day of that week to survey the damage, checking on dozens of houses, many of which, unfortunately, did not survive the fire.

Since his freshman year at Sonoma Academy, Chris has made it a priority to keep his community informed about the Northern California fires that now occur at least once a year during fire season, which is typically from July to October.

“My freshman year, the Tubbs Fire broke out. My whole town evacuated,” Chris said. “I saw so much misinformation, and I couldn’t find out from any of the news sources where the fire was and which houses were okay. I also noticed that people on social media were posting a bunch of BS information about the fires, causing a lot of alarm. They would say, ‘Oh, the fire is going to go downtown,’ but I knew that wasn’t actually happening. I wanted to check the credibility of the information people were sharing, so I started to find that information myself. I started listening to the fire radio and looking at maps.”

Throughout high school prior to this year, Chris relied on his fire radio and online resources to give him updates. This year’s fire season, however, was different. This was Chris’ first experience being present at a fire, and it was the first time a fire burned through his own neighborhood, putting both his physical and mental health in harm’s way.

“Being in a fire itself is traumatic in a way that I wouldn’t have imagined. [There is] something about feeling so helpless. There was a point where I walked right next to the fire and realized I couldn’t breathe. My eyes were stinging from the smoke, so I had to put on goggles and two masks,” Chris said. “I was numb. There was an overlying sense of anxiety and fear because I’ve never been around that before. It was just so much. It’s already been a tough year with the pandemic and everything. [The fire] was such a sensory overload. With helicopters, sirens, heat from the fire, the smoke — I kind of shut down, honestly.”

Chris’ dedication and bravery did not go unnoticed, with recognition coming from individuals across the Bay Area, including some students from Redwood and other Marin County high schools. Close friend of Chris and Sonoma Academy senior Max Brinegar was happy to see Chris getting the recognition he deserved, as he was already aware of Chris’ outstanding character.

“Every single person’s Snapchat story was thanking [Chris]. I kid you not, 95 percent of the Snapchat stories I saw during the worst of those fires were just thanking him,” Brinegar said. “[Chris] was oftentimes running on little sleep. It takes a special person to be able to have that kind of dedication. Since he was doing it through a Snapchat story, he obviously wasn’t in it for any kind of monetary gain or anything, and he’s not the type of person to do it for social capital. I think he was purely doing it because he wanted to help people, and I respect that a lot.”

Not only did Chris make an impact on individuals across the Bay Area, he also made a special impact in his own home. Sarah Kam, Chris’ younger sister, sees her brother as a role model.

“I’m very proud of what [Chris] did. There were so many other things he could have been doing with his time during the fires. He could have been worried or stressing out about the situation, but he was out there helping people and being engaged. I think that’s very cool and something I am proud of as a sibling,” Sarah said.

According to Chris, the recognition was a reminder that his hard work had paid off, as keeping his Snapchat updated often involved making self-sacrificing decisions.

“I was lying in bed in Healdsburg after I had evacuated, and I was just scrolling through my phone hitting accept, accept, accept. On the one hand, I wanted to go to sleep. I asked myself: ‘Do I want to prioritize myself and go to sleep, or do I want to help 600 people out?’ By the end of that night, I had at least 1,200 people total on my Snapchat,” Chris said.

However, with inevitable future fire seasons on the way, Chris is uncertain if these selfless acts are sustainable due to the toll they had on his mental health.

“It is a huge burden to carry because I felt like I had all these people relying on me,” Chris said. “I felt like if I took a break and turned off the radio that I was letting these people down. That was a huge mental battle that I was going through. I guess I’m a selfless person, and at the end of the day, I’m going to value what other people want more than what I need. I know that isn’t healthy, but that’s how I feel. I felt like I wanted to help others, and I was so focused on that that I couldn’t help myself.”

However challenging it was for Chris to report from the Glass Fire, he was able to help his community in a way that news publications could not, which is an accomplishment he holds close to his heart.

“I got tons of messages from people, some [of whom] lost their houses, thanking me [and saying] that ‘You sent out your updates faster than Nixol or anyone else, and I had more time to pack my belongings and get out of my house,’” Chris said. “And some of those people’s houses burned. That in itself is extremely rewarding. That, I think, makes up for the mental trauma that I’m feeling because I feel that I really helped these people.” 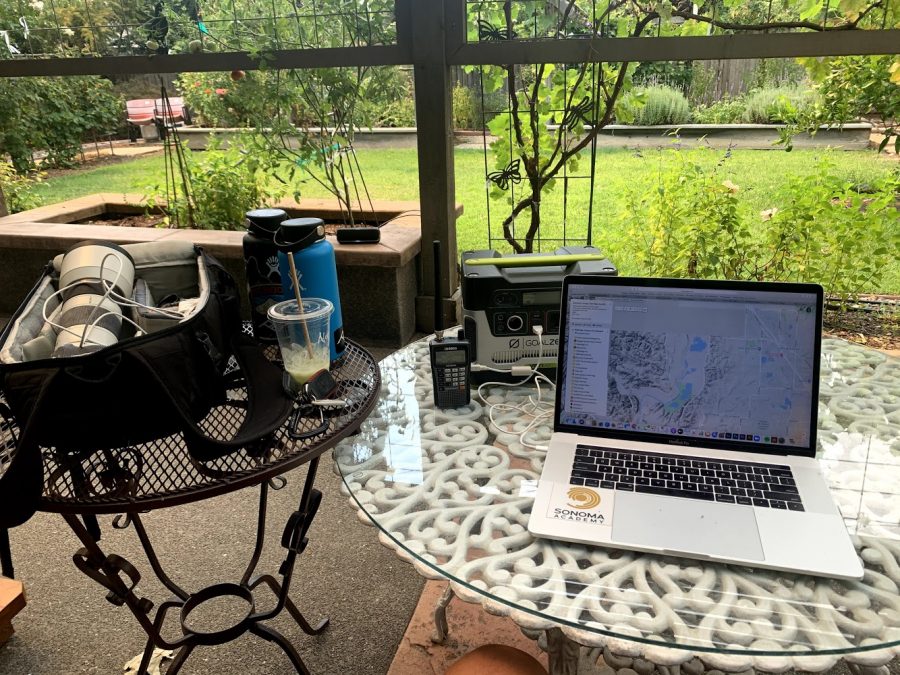