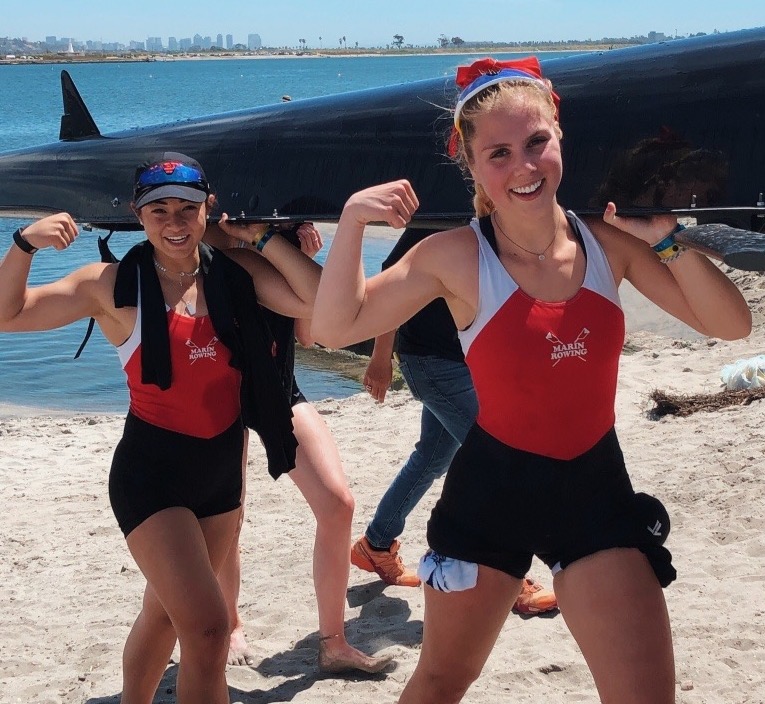 “I went from the bottom to being second at Nationals and one of the top 16 women in lightweight rowing. I worked my ass off. I improved my technique. I improved my grit. I improved my team leadership. [My sophomore] year changed me as a rower,” senior Anais Gorek said.

On Nov. 11, Gorek signed her letter of intent to row for the University of California, Berkeley (Cal). Winning regional and national titles, she has become a clear asset for the various boats she’s been in. However, this has not always been the case. When Gorek first joined Marin Rowing Association (MRA) in the fall of 2017, she could never have imagined the amount of success she would find in the sport.

According to her coach, Sandy Armstrong, Gorek was almost cut after her novice year, but her grit and perseverance shined through, landing her a spot as one of the 50 varsity girls. Over the next year, Gorek devoted herself to the erg — a stationary rowing machine — upon which she rose both in speed and boat positions.

“Coming out of my novice year in the B boat, I had this mentality that I was there for a workout, and I didn’t really care. After an [old coach] told me I might as well just quit, I decided to push myself [and] prove him wrong,” Gorek said. “I started to stay after practice a ton and work really hard. It got to the point where every time I was put in a different boat that boat would win. I was slowly making my way to the top.”

That year, Gorek’s new mindset paid off, as she won the varsity girls’ Most Improved Athlete Award and worked her way up to the Lightweight 8 boat, which placed second at Nationals. Armstrong credits Gorek’s impressive progress to her dedicated work ethic.

According to US Rowing, the ideal individual 2 kilometer erg time for the U19 Women’s National Racing Development Team is 7 minutes and 40 seconds or faster. Currently, Gorek’s best time is 7 minutes and 29 seconds, which, according to Armstrong, puts her on track to be one of the three fastest rowers on this year’s MRA varsity girls’ team. Because of her incredible scores and light-hearted personality, Gorek has become a leader for the team.

“She’s always aware of what other people are doing and will encourage them. When she’s done with her own work, she will get off of the machine and go behind someone else and cheer them on,” Armstrong said. “She has this funny, great personality that keeps the girls and me in this place of smiling and enjoying things.”

In addition to Gorek’s coaches, her teammates also value her contribution to their boat. Marin Catholic senior Claire Brockman, who has been Gorek’s teammate for the past three years, admires her dedication to the sport. Brockman believes Gorek is someone that the team can always count on.

Gorek’s commitment to the sport has paid off, securing her a spot in Division I collegiate rowing. At Cal next year, Gorek plans to continue dedicating herself completely to improving as a rower.

“Rowing is my life. It is all I do, but it has also turned into the boathouse being my second home and my safe place. It’s the place for me to feel good about myself. It’s a place where I can be challenged in a way that’s up to me,” Gorek said. “It’s not up to the math curriculum or for my teachers to teach me; it’s all on me and my teammates. [Rowing] has taught me countless lessons about myself and about the people around me. It’s my world and I wouldn’t want it any other way.”