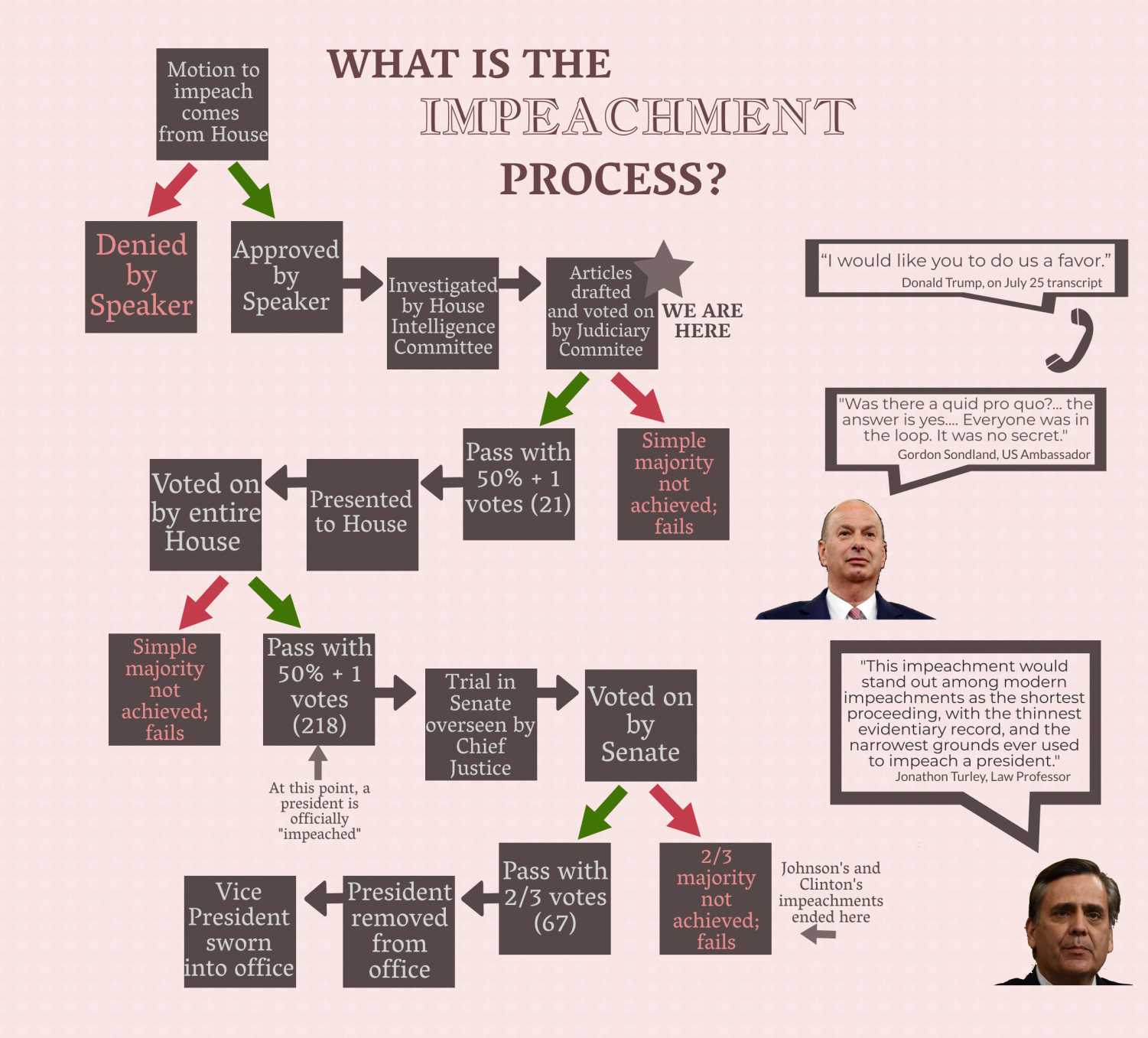 In early September, an anonymous Washington whistleblower claimed that in a phone call on July 25, President Donald Trump threatened to withhold military aid to Ukraine if they didn’t investigate the son of his political rival, Joe Biden.

Since then, a whirlwind of opinions on the impeachment trial of Trump have dominated the media, which can make it hard for everyday citizens to understand what is really happening. Government teacher Robert Komisar thinks that the process can be easily misunderstood.

“Being impeached doesn’t mean that you were kicked out of the presidency and I think that that’s a real clarification issue for some students and just people in general,” Komisar said.

Impeachment is a formal, political accusation of misconduct against a sitting president, and, according to a Bark survey, while 48 percent of students believe that Trump should be removed from office, 31 percent are undecided. An impeachment case can be started by any member of the House of Representatives, but the Speaker of the House, the leader of the majority party, decides whether or not to move forward with it. If the Speaker accepts the motion to impeach, as Speaker Nancy Pelosi did on Sept. 24, then an impeachment inquiry begins to focus on investigating the cited misconduct. The House Intelligence Committee investigates and reports their findings to the House Judiciary Committee. The Judiciary Committee then draws up articles of impeachment, which are the specific charges against the president. There can be as many charges as the Committee chooses, but each must be voted on and approved by a simple majority within the Committee, which currently consists of 24 Democrats and 17 Republicans.  On Dec. 10, the Judiciary Committee released two articles of impeachment against Trump: “abuse of power” and “obstruction of Congress.” The Committee is expected to vote by the end of the week. It is expected to pass, and after, the House at large will vote before Christmas on whether or not to bring the case to trial in the Senate in early 2020. In the House, 218 out of 430 votes are needed to impeach and there are currently 233 democrats in the House and 197 Republicans. 228 members of the House have said they support an impeachment inquiry, 227 of whom are Democrats.

Trump has stated that he hoped an investigation by Ukrainian officials might uncover a scandal that would hurt Democratic candidate Joe Biden. Hunter Biden, the son of Joe Biden, served on the board of Burisma Holdings Limited, a major Ukrainian gas company, from 2014 to April of 2019 in an advisory role. After the company’s owner, Mykola Zlochevsky, was accused of money laundering and tax violations, Ukrainian prosecutor Viktor Shokin was tasked with an investigation. Shokin was criticized by the U.S. and Western European governments for being corrupt and ineffective, and Joe Biden was one of many officials who called for Shokin’s replacement. According to Bloomberg, no evidence was found implying that Biden was working in the interests of his son or Zlochevsky.

“The President of the United States is using the power of his office to solicit interference from a foreign country in the 2020 U.S. election,” the whistleblower stated. Witnesses from the White House National Security Council who were present for the call as well as a transcript of it have confirmed that Trump did, in fact, say he would withhold military support and that he wanted Ukraine to investigate the Bidens, using the words, “I would like you to do us a favor.”

After the July phone call, $391 million in aid to Ukraine was discovered to have been frozen for months, until right before the story broke to the public. Considering that Ukraine, a United States ally, is actively at war with Russia, Democrats have said this act endangered national interest. Ukrainian officials stated that they did not know that this money had been frozen until the story broke, but in testimony on Nov. 20, senior Pentagon official Laura Cooper testified that she received emails on the day of the phone call from Ukrainian officials saying, “What is going on with Ukrainian security assistance?”

The transcript of the phone call has been an important piece of evidence throughout the hearings, and was recovered after being moved to a highly classified servor, an action that broke White House protocol.

In one part of the phone call transcript, Trump mentions that Marie Yovanovitch, a widely respected U.S. ambassador to Ukraine, is “going to go through some things.” In testimony on Nov. 15, Yovanovtich revealed she was abruptly fired by Trump in May 2019 and felt threatened by Trump’s comments. During her testimony, Trump attacked her on Twitter, effectively adding witness intimidation to the case against him. He also criticized Jennifer Williams, an aide to Vice President Mike Pence, on Twitter during her Nov. 19 testimony.

On Nov. 20, U.S. Ambassador to the European Union Gordon Sondland testified publically. According to CNN, Sondland donated $1 million to Trump’s inauguration, but his testimony greatly implicated the White House because it linked Trump directly and explicitly to an exchange of favors, called a “quid pro quo.” Prior to his testimony, a text from Sondland to U.S. Negotiator Andriy Yermak was revealed which stated that a White House visit would not happen until an investigation announcement was made by Ukraine. Sondland also testified that Rudy Giuliani, Trump’s personal lawyer, did create a quid pro quo with Ukraine over investigations into Biden, at the “express direction of the President.” Furthermore, he relayed conversations and showed emails and texts that implicate more of Trump’s “inner circle,” including Secretary of State Mike Pompeo and Chief of Staff Mick Mulvaney and Vice President Mike Pence.

While House Democrats have called the case against Trump “overwhelming,” the opinions of elected officials have remained divided along partisan lines. Komisar says that this is expected based on historical precedent.

“At least [in] the two impeachments that I have been alive for, the search for truth or research for wrongdoing seem to very much get undercut by the promotion of the idea that [the allegations are] purely political in nature,” Komisar said.

Morgan Bello, the president and founder of the Redwood Republican club, thinks that the current investigation into Trump’s actions is worthwhile but is undecided on whether or not she supports continuation of the impeachment. She thinks the impeachment process could even strengthen Trump’s appeal.

“I’ve talked to different people who think that [during the 2020 election], the moderate vote will go to Trump because of this,” Bello said. “I think the Democrats could be doing more to show how their candidate is worthy instead of trying to denounce the Republican candidate.”

Republicans have defended Trump’s action by citing Article Two of the constitution, which leaves all decisions in foreign policy to the executive branch and the president. This means that regardless of the morality of his policy, he does hold the right to make decisions for the nation, and therefore Democrats must prove that Trump’s intentions were self-serving and endangered the country. Republicans have also claimed that since the money was eventually sent through after the story was revealed, the quid pro quo is irrelevant.

Bello says that Trump’s intentions during the call are important to keep in mind while reviewing the case against him.

“It is a question of morals in the sense that, do the American people truly believe that he was putting his own partisan interests above the national interest? And if the Democrats can prove that, then there’s something to be said,” Bello said. “I think that there’s more evidence to be found and his state of mind is very important. When he was making those decisions, did he have a guilty state of mind at the time? Was he thinking, ‘I’m putting all other obligations and alliance with Ukraine aside?’”

If the House votes towards impeachment, then Trump will be brought to trial in the Senate. Trump and Giulani have both expressed that Trump feels unfairly treated as the defense. Komisar explained the differentiation between a typical court trial and Trump’s rights in a political impeachment trial.

“He’s complained a lot through the process that he hasn’t had lawyers and White House counsel. He keeps talking a lot about unmasking the whistleblower and [saying] that as a defendant, [you] have a right to confront your accuser, meaning face-to-face in a court of law. And Trump, well, his viewpoint is not exactly informed by an understanding of our governmental processes…. He’s not getting the same type of due process that he would get in a court of law, because he’s not in a court of law. He’s in the U.S. Congress and the U.S. Senate, and the rules are different,” Komisar said.

Once in the Senate, the trial is overseen by conservative Supreme Court Chief Justice John Roberts. Because of the differentiation between political and criminal trials, Congress will have no authority to pursue any criminal consequences during the trial, but they do have the power to remove the president from office. After evidence is presented and deliberated, the Senate votes on whether or not to convict. Republicans hold the majority in the Senate, with 53 seats to the Democrat’s 45 seats and two seats held by independents. If at least 67 (two thirds) of the Senators find the president guilty on any of the articles, then he will be removed from office and the Vice President will be sworn in. In the unlikely event that Pence is eventually impeached as well, Pelosi would be next in line for the presidency.

Komisar says that the removal of a president is an important right of the legislative branch. He thinks impeachment is a crucial part of the Constitution’s checks and balances system.

“It doesn’t really matter so much if they’re really popular.” Komisar said. “[Someone could] ride the storm of public psychosis to gain support, and then once in the office, use it to personally profit. And then, although the person may have ascended to that office by legal means, once they’re there, using the office for those kinds of means, that’s a person you need to be able to get rid of.”

Images of Sondland and Turley courtesy of CNN