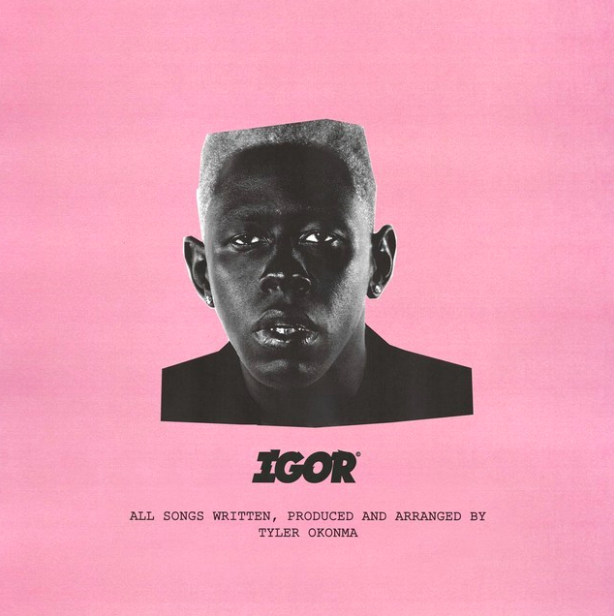 Following his 2017 album “Flower Boy,” Tyler the Creator’s newest creative vision “IGOR” features a series of titles that encapsulate his newfound wild energy. Out of the twelve songs in “IGOR,” there is something for everyone—a summery smash hit, alternative titles for those with a more niche music taste as well as less traditional but equally catchy songs. “IGOR” is Tyler the Creator’s personal awakening as he establishes his unique style within the music community. In his newest album, Tyler doesn’t hold back. His quirky, confident nature shines through in every track, lending itself to an intimate experience between the listener and artist.

Opening the album is the ominous “IGOR’S THEME” where a bass-heavy drum beat dominates the introduction. The inclusion of a preliminary track was an important step in making this album flow like a story; with every song you are taken through a journey of love and life. “IGOR’S THEME” is no exception. The first moments of the song are off-putting and feel incomplete due to a single, abrasive synth playing for 20 seconds. However, as the track progresses, the kick and subtle synth changes make it hard to turn off. Tyler’s light, airy vocals laid atop the simple beat create a satisfying, calming sound. The outro of “IGOR’S THEME” is reminiscent of Kanye West’s 2013 Album, “Yeezus,” which is known for its “organized chaos.”

“IGOR”’s introductory track is followed by the album’s most consumer-friendly track, “EARFQUAKE.” Its consistent bass and chorus of “don’t leave, it’s my fault” create a mellow aura that’s easy to listen to. Despite the track’s meticulous production, it falls short in terms of its lyrics with vague, meaningless vocabulary that keeps it in line with mainstream trends. Only a few stanzas long, the lyrics are repetitive and fail to add much to the album. However, the best part of “EARFQUAKE” is its midsection which features a unique break in the chorus for a much-needed interjection of Playboi Carti’s unconventional vocals. Carti’s raspy, animated voice cuts in as he perfectly and ridiculously adds character to the track.

“I THINK,” my personal favorite, goes back to basics in a beautiful harmony between Solange’s smooth vocals and Tyler’s unique sound that mimics early 2000s hip hop. The first minute produces a sound

similar to Kanye West’s early album, “Late Registration.” Solange’s pleading voice adds a somber tone to the track as it progresses; the contrast between her vocals early in the song and towards the end creates a feeling of relief as you listen.

“IGOR” maintains a flawless balance between a variety of styles and sounds; from the arpeggiator in “RUNNING OUT OF TIME” to the bouncy bass of “PUPPET,” despite using so many different aspects, each track manages to feel interconnected. The result is an album that moves like a story and culminates into Tyler’s new persona.

The unsettling, somewhat strange production of “WHAT’S GOOD” and “NEW MAGIC WAND” give us a break from the calmer, more summery tracks on the album. “WHAT’S GOOD”’s inclusion of a pink-panther style piano sample gives the hard-hitting lyrics a lighter tone. Both tracks add a quick, sporadic quality to the album, revealing Tyler’s topsy-turvy emotional journey in this release.

Although “IGOR” does not boast “Flower Boy’s” power to transform and transfix its listeners in the mind-boggling way it did, it succeeds in garnering a wider fan base for Tyler. Features from Playboi Carti, Solange and Kanye draw in a larger audience yet still preserve the Tyler’s creative vision. Put simply, this album is not as much for Tyler’s day-one fans as it is for the masses.