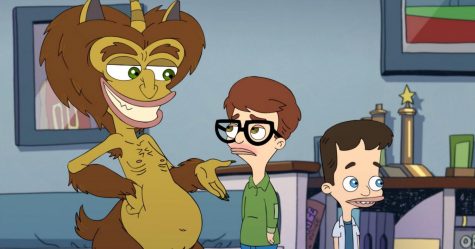 Valentine’s Day special), viewers watch as best friends Andrew Goldberg (Mulaney), Nick Birch (Kroll) and Jessi Glaser (Jessi Klein) navigate their way through the hell that is puberty. The friends are not alone in their awkward stages: each is accompanied by a ‘hormone monster,’ a typically crass, furry creature who whispers in the ears of the pre-teens like devils on their shoulders. These whispers aren’t always appreciated, and often the hormone-driven actions the characters take backfire in a big way.

This cartoon is not for the faint of heart, and probably not for watching with your parents or younger siblings. The dialogue is vulgar, and the content can often be graphic. However, if you’re comfortable with dirty humor and flashbacks to seventh grade, “Big Mouth” is the perfect show to make you and your friends laugh uncontrollably. While watching, you can’t help but cringe a little bit at how much this show reminds you of your angsty tween years.

If you prefer more subtle humor with a message, this show may not be for you. If talking pubic hairs and musical numbers about periods are funny to you, you’ve hit the jackpot.

High school for the British teens in “Sex Education” means more than just stress over academia; these formative years are the incubator for awkward students to fumble their way around sexual activity and tricky relationships. The series, which premiered on Netflix in January, follows Otis Milburn (Asa Butterfield), a sexually inexperienced 16-year-old boy who is incredibly wise about sexuality despite his lack of personal romantic encounters due to the fact that his mother is a sex therapist. His classmates are preoccupied with sex almost all the time, and while unusual and raunchy for viewers, this is nothing shocking for Otis. Teaming up with the edgy and callous Maeve Wiley (Emma Mackey), Otis turns his sexual knowledge into cash by starting his own sex therapy business at Mooredale High School.

Topics that are often considered taboo and uncomfortable to talk about, especially for adolescents, are addressed unapologetically in every episode of “Sex Education.” Emotional problems, abortion, issues facing the LGBTQ+ community, sexting and slut-shaming are all components of the series. The show goes in-depth on the issues; Otis’ therapy sessions with his classmates serve a dual purpose, not only perpetuating the plot, but also enlightening the viewer. The creators brilliantly utilize the main storyline of the show to entertain and inform watchers. The performances in the show are less than Oscar-worthy and the stereotypical depiction of high school life is, at some points, difficult to watch without laughing at the utter inaccuracy. Viewers can spot the group of snobby popular kids dressed in designer clothing, the outcast girl who wears leather jackets and the star athlete under extreme parental pressure. While these character archetypes are nothing new for teen-oriented shows, it’s fairly easy to look past the clichés and appreciate the many truths about teen sexuality that this show depicts.

If you’re browsing through the vast expanse of shows that Netflix offers, you may come across a thumbnail image of purple vibrators labeled with the title “Grace and Frankie.” This series, which aired in 2015 on Netflix and has since produced five seasons, revolves around two women, Grace Hansen and Frankie Bergstein. Both are in their late seventies and are hit with a bombshell when their husbands reveal that they have been embroiled in a long-term affair with each other. This serves as the basis of the storyline as the women attempt to cope with the reality of their husbands’ sexualities and the drastic changes they face at such a late point in life.

The series grazes over themes of the struggles faced by the gay community when it comes to being true to oneself, especially 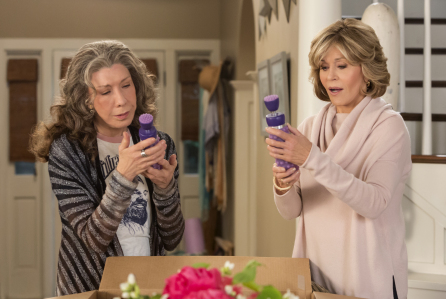