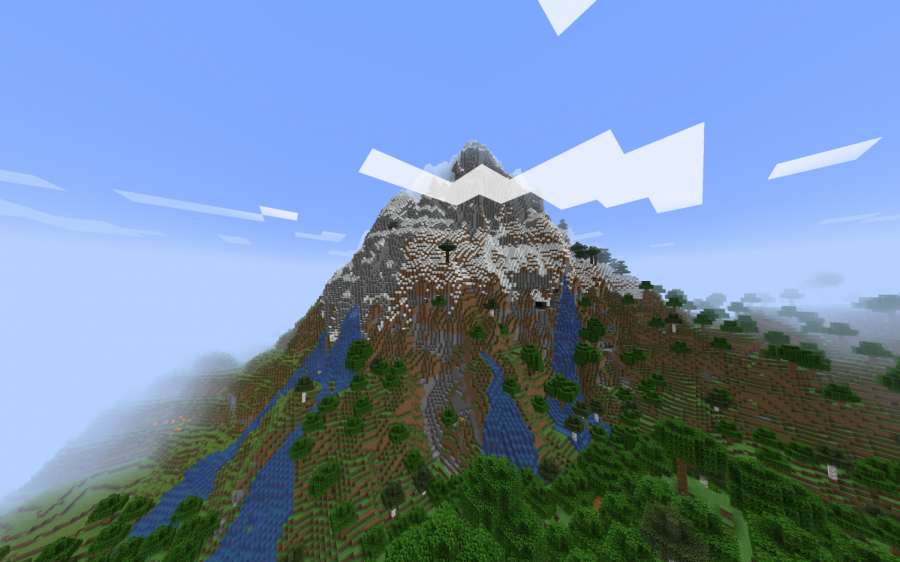 From soaring heights to shuddering depths with Minecraft 1.18

Minecraft, a sandbox game released in 2011 by Mojang Studios, has made a name for itself through its concept, lore and unrestricted gameplay. With extensive terrains and resources, the game offers a canvas for players to explore and create. Some choose to follow the lore and ‘beat the game’ by defeating the Ender Dragon, the final boss, while others choose to farm and coexist peacefully with sheep in the Overworld. Regardless of a player’s agenda, a trip into dark, chilling caves is inevitable — they hold important materials needed to perform universal tasks. But worry not! With Minecraft 1.18: The Caves and Cliffs Update Part 2, Mojang Studios heightens the spelunking experience.

Among new music and advancements, the first noticeable change in 1.18 is with proportions. To account for larger, more extreme cave formations, developers vertically extended previous world dimensions by 128 blocks. Spanning from y-64 to y320, a staggering 384 blocks provide generously for 1.18’s new features. Underground, this abundance of space is saturated by three cave types, or “cave noises,” according to official Minecraft changelogs. Noodle Caves are exceptionally narrow and often fully vertical, while wider Spaghetti Caves tunnel horizontally. Cheese Caves, the most grandiose of the three, are characterized by large chambers of open air, typically upheld by pillars of stone that make for a stunning visual.

These noises craft expansive room for two new cave biomes: Lush and Dripstone. With tall, arching ceilings capitalizing on the vast subterranean expanse, Lush Caves are a wonder to experience. Chandeliers of glowing cave vines hang from moss-covered ceilings as spore blossom pollen drifts to the floor. Naturally spawning clay and ponds of water generously decorate this biome, and the complex intersections of cave noises create a multi-tiered masterpiece.

Dripstone Caves, on the other hand, are a little less dreamy. Due to the sheer size of dripstone peaks, this biome seems to prefer a mix of Cheese and Spaghetti Caves, leaving plenty of room for a barrage of angry creatures to spawn in the expansive darkness. Only the occasional glowing lichens clinging to the ceilings provide for light in these desolate cavities. If the odds are in your favor, sometimes light from a river of lava spilling from the walls will guide your way. And, although the texture of dripstone peaks is a sight to behold, their size and stature make it all the more difficult to find precious diamonds amidst the commotion.

The six new Overworld biomes — Grove, Frozen Peaks, Jagged Peaks, Stony Peaks, Snowy Slopes and Meadow — are less exciting when compared to their underground counterparts. Snowy Slopes is a classic mountain biome with a few layers of snow blocks on top, and Grove gently plants a Taiga Forest on top of that. Frozen and Jagged Peaks often tower above the cloud level of 191 blocks, which is where you can spot the difference between the two: Frozen sports healthy layers of packed and regular ice, while Jagged mixes snow blocks and thin snow. As for Stony Peaks, the impressive strips of calcite scarring across its surface make up for its lack of elevation. Blankets of flowers color the Meadow biome, and the droves of donkeys make it easy to traverse the rolling hills.

And the best part of it all? 1.18’s new biome-blending technique reinvents biome generation, meaning you can stroll through a savannah and fall right into a pile of Grove snow. Now Snowy Slopes can easily unfurl into Bamboo Jungles, and the ground can effortlessly open right up into a Dripstone Cave — complete with a welcome party of mobs.

So whether your shears are about to break, or you need to bolster your inventory before taking on the Ender Dragon, Minecraft 1.18’s new features make your adventure all the more enjoyable. Cross through your local Meadow, pass through those nearby Jagged Peaks or take a trip downstairs to a glowing Lush Cave to experience this new world of caves and cliffs.