Sports spring back into action after a disappointing fall 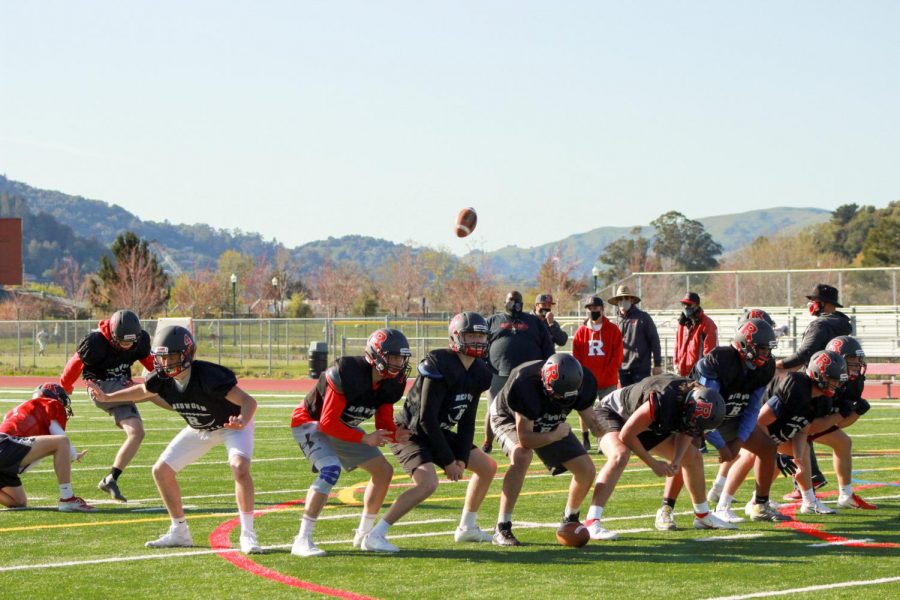 Gallery|25 Photos
Keely Ganong
Lining up in the field goal formation, varsity’s special teams prepare for their next game.

As COVID-19 remains prevalent throughout Marin, no sports in the Marin County Athletic League (MCAL) will have championships in 2021. Despite this, each team will compete in a number of games or meets and attempt to prove their dominance over other local schools. Key players, many of which made MCALs first or second team in the past, will be crucial in finding this success (making MCALs first or second team is a major accomplishment, as it is viewed as an all-star team because the athletes that are selected for it are the best in the league). All sports, regardless of whether they are traditionally practiced in fall, winter or spring, will begin by mid-April, as long as COVID-19 cases continue to decline. This preview only includes the sports that started on March 15.

Football
As a fall sport, football’s season was considerably delayed by COVID-19. After a successful 2019 season — when the team won the coveted MCAL championship and broke a ten-year losing streak to San Marin — expectations to carry that triumph into 2020 were high. However, due to the many restrictions on high-contact sports, the team was prevented from doing any hand-to-hand drills. Despite this setback, all the players have been working out individually to propel them to the top of the league, according to senior captain Zach Ginsburg.
“We have been apart because of the pandemic, but the guys who are on the team are the ones who have been putting in the work for the past year hoping to be able to play. We have been working extremely hard with no real assurance that we were even going to have a season, so I think that motivation we have as a team makes our dynamic even stronger because we are all working towards the same goal,” Ginsburg said.

Lacrosse
Lacrosse, another high-contact sport, has also been limited due to COVID-19 safety precautions. Both the girls’ and boys’ teams are the defending 2019 MCAL champions, which increases the pressure and excitement surrounding the 2021 season. While succeeding in MCALs is certainly a goal for the girls’ team, according to junior captain Megan Minturn, establishing a strong community is just as vital.
“Creating a welcoming environment is super important. Part of the reason we were so successful two years ago was because of [our tight bond]. As a captain, I think it is really important to keep a positive attitude to show the team that if you miss a ball, it’s okay — it is not the end of the world. We have that chemistry and have been putting in a lot of work outside of preseason, so we are hungry for the payoff,” Minturn said.
The boys’ team is also looking to put their control in the league on full display, as stated by coach Blake Atkins.
“We want the same outcome from [2019] with the leadership of our seniors. Since there are no official MCAL or North Coast Section (NCS) championships, we are just going to play to the best of our ability and maintain the standard we have established,” Atkins said.

Golf
Because golf is inherently COVID-19 safe, the boys’ and girls’ golf teams have been able to practice normally throughout the pandemic. For the boys’ team, who were MCAL champions in 2019, the most important factor in remaining a top contender is to take as many quality swings as possible, according to junior Damian Wabl.
“At this point, all we need as a team is to practice consistently. Having those repetitions that come from practicing multiple days a week is going to be critical,” Wabl said.
In the past, the girls’ team has trained at a range in the East Bay, making practices infrequent. However, this year they switched to practicing at the Meadow Club in Fairfax, which junior Morgan Moseley feels will ultimately help them improve.
“[Meadow Club] is a lot more convenient and a nicer course, which means more practice time. It will make it a lot easier to progress as a team,” Moseley said. “We are also mostly upperclassmen so we are all experienced, and that will help us have a stronger chance to do well this year.”

Tennis
Both the girls’ and boys’ tennis teams remain at the top of their game entering 2021, led by key players such as junior Georgia Harms and senior Polo Cowan. While the boys’ team is the defending MCAL champion, the girls’ team lost the 2019 championships to Tamalpais High School in a disappointing defeat. With COVID-19 limiting the teams to only practicing in singles prior to entering the Red Tier, improving as a team has been difficult, according to senior Erin Roddy, who was on MCAL’s second team for singles in 2019.
“[Before we were in the Red Tier], we weren’t allowed to play doubles, so that was bringing people down and made it harder for the team to establish a bond,” Roddy said. “That being said, I think we are a strong team, and we can definitely get past it, especially because there is not a lot of pressure since there aren’t playoffs this year.”
Taking advantage of the more relaxed environment this season, the girls’ and boys’ tennis teams are expected to perform well, particularly with fewer restrictions preventing them from practicing together in the Red Tier.

Softball
Having not played on the field in over a year, the softball girls are excited to be able to practice and be together again, particularly as a team that thrives off of each other’s energy in the dugout, according to senior captain Morgan Bello. Specifically, Bello is excited to have her final season on the team, after not knowing what would happen when the season ended last March.
“I’m most excited about spending my last year with my friends. Also just being able to be on the field, after not being able to get a junior year season last season [will be great]. I think that the girls are all just excited to, … hopefully, have an MCAL season and maybe win,” Bello said.
With a new team full of excitement for the upcoming season, the girls are expected to do well this year and give their seniors a final season with the team.

Field hockey
Originally a fall sport, the field hockey season has been delayed dramatically due to COVID-19 restrictions and guidelines. As reigning MCAL champions of the 2019 season, the girls are very excited to be back on the field to defend their title. COVID-19 guidelines made the start of their season much later than anticipated, but being back on the field has rejuvenated their spirits.
Senior Chloe Swildens, captain of the team, is happy to be back on the field and get her final season on the team.
“It’s great to be able to see the rest of the team again, since our season stopped so quickly last year. I now get a senior season, with a senior game and everything, which I’m excited for too. To be able to play my final year is going to be really great, especially since like this time last year nobody was sure if we were going to get one at all” Swildens said.
Redwood’s field hockey team has already had multiple games since the start of their season a couple of weeks ago. They have won all of the six games played so far. The team’s success is promising, and they are expecting to retain their MCAL championship title.

Water polo
Because COVID-19 guidelines prevent players from gathering closely, water polo has had difficulty practicing as well during the pandemic. Teams now wear masks while on the sidelines, and players take them off right before they jump into the water. Practices are more socially distanced with less contact and meets have reduced the number of people that can be on the pool deck.
Junior Spencer Barnes is on the varsity boys’ team and is thrilled to be back in the water with his teammates, despite the differences in their meets and practices.
“The way that we practice and compete and the cleanliness we have on the pool deck and in the water [will be most different]. We are trying to be safe and not to get too close and up in each other’s faces so that we don’t spread the virus,” Barnes said.
Despite new guidelines and different ways that the practices and meets will go, the boys’ water polo team is ready to begin their season and compete in MCALs.

Baseball
After being champions of the 2018 and 2019 MCAL seasons, the boys of the varsity baseball team are ready to be back on the field. The team is excited to be together again and give their seniors a final season.
Varsity coach Mike Firenzi is ready to coach the boys again and have the team back together, but the future of the games and tournaments is still unknown.
“They’ve already determined that there’s not going to be an MCAL playoff or NCS or anything like that, which is kind of a drag. We’re going to be doing games in [the] county against MCAL teams,” Firenzi said. “Not to mention, we still aren’t sure on all the rules, as far on when to wear masks with people in the dugout. There’s a lot of uncertainty still with the COVID-19 rules that are going to happen.”
Restrictions and what the games will look like are still up in the air for the team, and exact guidelines have still not been set. Despite the uncertainty of the upcoming season, the team is ready to be back on the field and together as a team again, since their last season ended so abruptly.