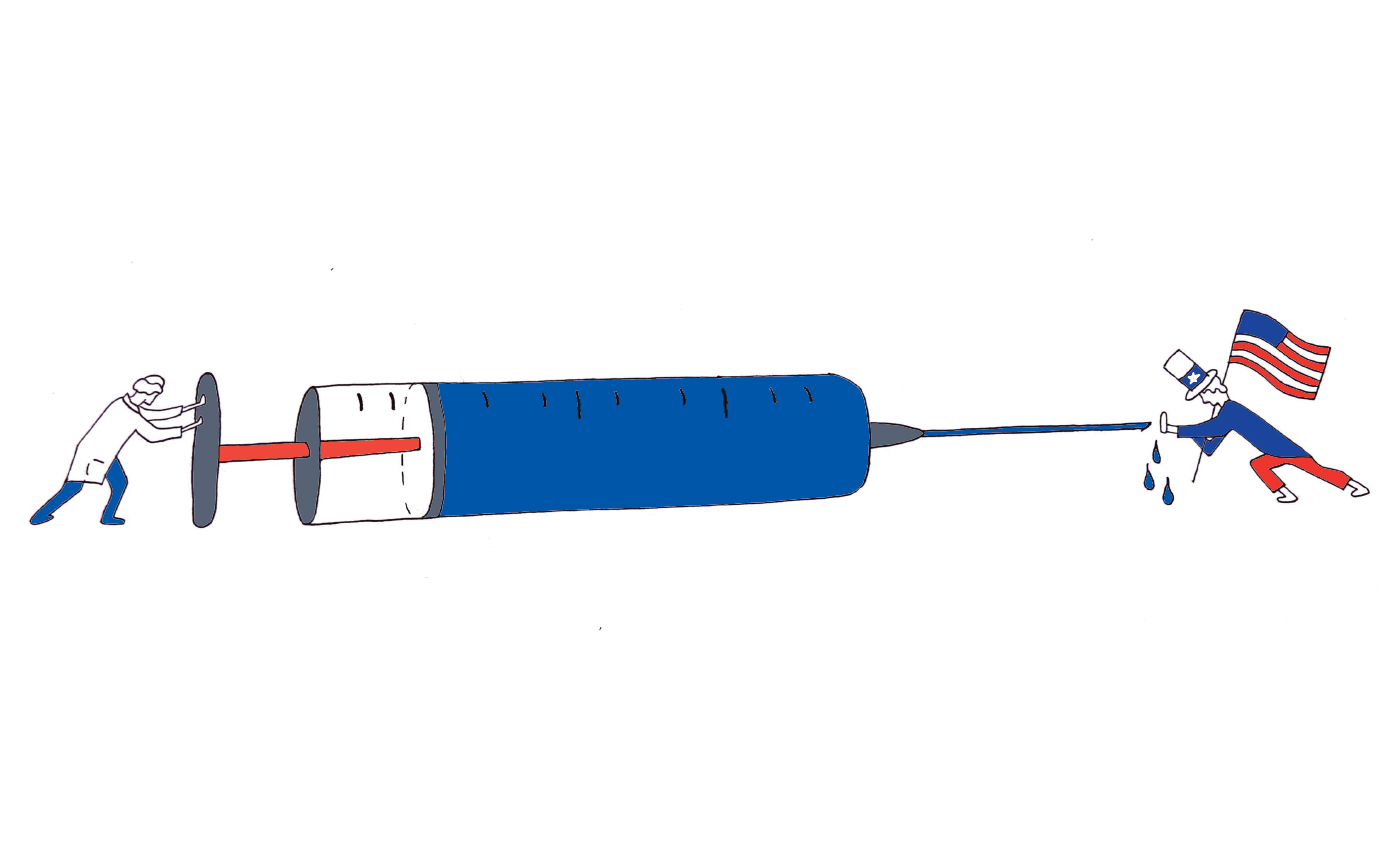 Vaccination hesitation: the next COVID-19 complication

As COVID-19 vaccines become more available, the controversy over their safety and validity heightens. Experimental vaccine trials began in mid-March, just shortly after the virus became a prevalent issue in the U.S.; these trials eventually lead to the approval of the Pfizer vaccine by the U.S. Food and Drug Administration (FDA) on Dec. 11 and approval of the Moderna vaccine on Dec. 18. Now both are becoming accessible to the public through a tier system suggested by the Centers for Disease Control and Prevention (CDC).

The first two groups of people offered immunizations were healthcare professionals and people over the age of 75. Surprisingly, not everyone jumped at the opportunity to get vaccinated. At MarinHealth Medical Center alone, roughly 30 percent of employees have declined the vaccine. According to the Los Angeles Times, approximately 20 to 40 percent of Los Angeles County’s frontline workers refused the vaccine as well.

However, this is not the first time there has been fear related to vaccination. From the polio vaccine released in 1955 to the annual flu shot first distributed in the 1930s, there have long been conflicts between public health recommendations and the anti-vaccine sentiment.

Hesitancy towards receiving the vaccine is driven in part by a lack of publicly presented scientific evidence. For some, fears of side effects combined with personal beliefs, political conspiracy theories and other deterrents are more powerful than research-backed data proving the vaccines’ safety.

Dr. Barry Wenglin, M.D., an infectious disease specialist and former Chief of the Division of Infectious Diseases at White Plains Hospital in Westchester County, New York, has witnessed the increased influence of politics over the perception of vaccination.

“There is a lot of political thinking that the vaccine is being pushed by the government, and you can’t trust them; they’re out to get you. So some people have this feeling that there’s harm in getting the vaccine … A lot of [this thinking] is ‘Trump was responsible for the vaccine. Therefore it’s no good,’” Wenglin said.

Dr. Alyssa Burgart, M.D., co-chair of the Lucille Packard Stanford Children’s Hospital Ethics Committee and member of the Stanford Health Center Ethics Committee, gave a similar explanation as to how politics have played a key role in vaccine skepticism.

“Because these vaccines were developed very quickly, some people have concerns,” Burgart said. “People [think] that [Trump] would attempt to rush vaccines past normal safety practices.”

However, as a doctor, she feels strongly that the vaccine trials were sufficient.

“I personally have been satisfied by the fact that this [vaccine] truly did go through a robust approval process in record time, primarily because the government has really done a lot to streamline the [normally overly confusing] process,” Burgart said.

Similarly, Wenglin recognizes that the vaccine development pace adds to public fear and prompts individuals to postpone their vaccination.

“If somebody said there’s a new car coming out, your parents would say, ‘We need a car, we’re going to buy it, but let’s wait six months to get all the kinks out of the car and make sure that the [car company] gets all the glitches out.’ But with a vaccine, in a situation where there are a lot of people dying, you don’t have the luxury to wait,” Wenglin said.

In addition, many people oppose the vaccine based on extensive government conspiracy theories. Sally Fallon Morell, founder and CEO of the Weston Price Foundation, a Washington, D.C. organization that aims to educate its members about optimal nutrition, identifies as a “vaccine refuser.”

“[COVID-19] is not caused by a virus. Our own government, if you dig deep enough, admits that they don’t have this virus. They don’t know what it looks like. They haven’t photographed it. It’s radiation poisoning. So you have to ask yourself, ‘What’s this vaccine going to do?’” Morell said.

The CDC has disproved claims that COVID-19 is caused by anything other than a virus. Images of the virus exist, and there is no evidence that other factors cause these symptoms.

Along with political conflict, racial tensions have escalated during the past year. Some experts suggest that these tensions have added to the distrust and hesitation towards the vaccine.

“There are some people of color who think the vaccine is ‘white man’s revenge’ trying to get even with them. It’s a small cadre, but it was bad in my hospital. Some employees of color didn’t want to get the vaccine because they thought it was going to be harmful,” Wenglin said.

Dr. Eugenia South, Assistant Professor of Emergency Medicine at the University of Pennsylvania, disclosed that she was initially reluctant to take the vaccine given her experiences as a black woman.

“How could a vaccine developed under a president who displayed repeated acts of racism and who actively enabled white supremacist groups be trusted?” she said in an interview for NBC’s Health and Technology webpage in January.

Ultimately, though, South did get vaccinated. She points to the rigorous clinical trials, the FDA’s approval, the coverage of scientists of color involved in creating the vaccine and other black doctors taking it themselves to support her decision.

While social and political tensions have fueled the resistance to the COVID-19 vaccine, there are also concerns that the vaccine’s physical side effects will be worse than the virus itself.

Cindy Ross, a Marin resident, has had a poor history with vaccinations due to allergies and other physical vulnerabilities. She is concerned about the expectations that most people should get the vaccine, no questions asked. Having researched the potential allergens in the available vaccines, she now feels confident that they will not cause her harm, but she worries about others who may have negative reactions.

85-year-old Marin resident Helen Hayes has also been concerned about the possibility of side effects for her age group.

“I was excited for a while [about getting the vaccine], but then I read about two people who were in my age group who died about five days after getting the vaccine … I just don’t want to die, but what I am trying to tell myself is that it’s not the vaccine [that is causing the deaths]. I just have to shift gears mentally and go get it,” Hayes said.

Hayes is correct to assure herself that the COVID-19 vaccine has not directly caused any deaths. All reports of deaths following vaccination have been linked to those having the virus beforehand.

Morell, who is against all vaccines despite this evidence, feels that the vaccine’s benefits are minimal to none and not worth the risk.

“There are studies showing that [vaccines] cause autism. [The vaccine] doesn’t do anything for you … We’re starting to get reports that say there have been a lot of very serious side effects that have prevented people from working, even things like paralysis,” Morell said. “There’s just no benefit and very high risk to this vaccine.”

The paralysis Morell refers to is called Bell’s Palsy, which is temporary paralysis in the face. The FDA reported that four people developed Bell’s Palsy who had the vaccine in the trials and none in those who had the placebo. According to the FDA, “the observed frequency of reported Bell’s palsy in the vaccine group is consistent with the expected background rate in the general population, and there is no clear basis upon which to conclude a causal relationship at this time.” Meaning it is incorrect to say that the vaccine will cause this issue with absolute certainty.

Additionally, the CDC has presented clear evidence against the claim that vaccines cause Autism Spectrum Disorder (ASD) in children, stating that studies have shown that there is no link between receiving vaccines and developing ASD. “In 2011, an Institute of Medicine report on eight vaccines given to children and adults found that with rare exceptions, these vaccines are very safe.”

The CDC also cites other studies disproving outside causes of ASD; it is a developmental disability that has only been linked to genetics and problems during pregnancy. There is no evidence to support the existence of causes of ASD outside the womb, such as vaccination.

Still, Morell remains convinced that the vaccine is damaging and is determined to spread her message.

“I’m astonished at how many people are ready to roll up their sleeves,” Morell said. “It’s like everyone’s under a spell, and the propaganda machines are running at very high speeds. Some of these side effects are for life.”

According to Burgart, the coronavirus’s aftermath is far more severe and possible than the small risk of allergic reactions to existing COVID-19 vaccinations.

“No one is saying there are no risks of side effects …  I think what’s been lost here [is the risk of disease]. For people my age, we have grandparents who had polio or lost siblings or friends to polio. And our parents had measles and mumps and rubella, and having those diseases is far more risky overall than the risks of vaccination,” Burgart said.

Burgart feels it is the responsibility of health professionals to encourage the public to get the vaccine and convince people of its safety and importance.

“It’s incredibly important for public health officials, for healthcare workers and frankly for anyone who gets vaccinated to share their positive experience with their friends, with their families [and] with their coworkers, to really encourage everyone who can safely be vaccinated [to get vaccinated] as soon as possible,” Burgart said.