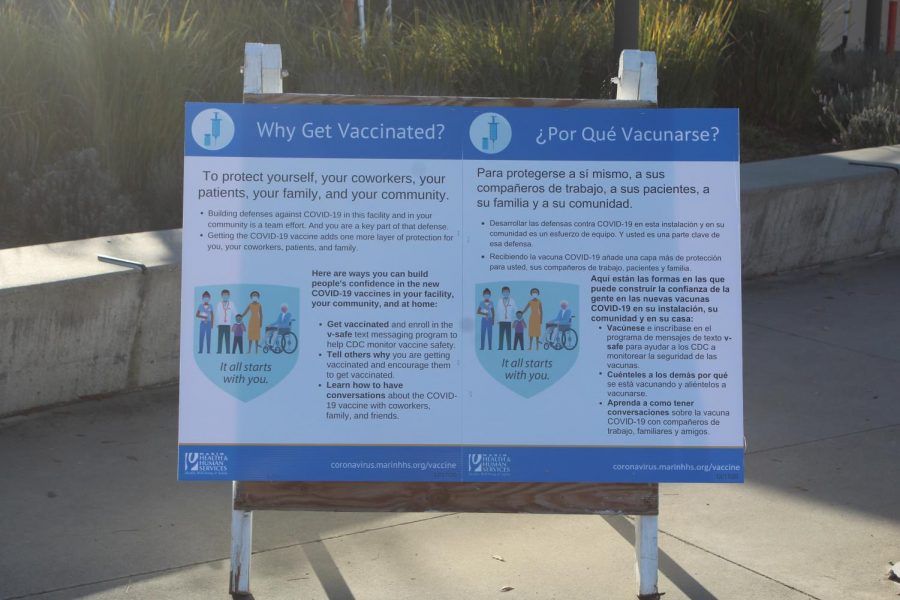 Gallery|4 Photos
"Why Get Vaccinated?" signs standing inside and outside the County Fairgrounds building encourage the community to get the vaccine. Photo courtesy of Sofi Mincy.

On Tuesday, Jan. 12, Marin County reopened its recently-expanded vaccine clinic to host the growing crowd of health care workers seeking their first or second dose of the COVID-19 vaccine. The original operation, available only to Phase 1A-Tier 1 frontline workers, opened roughly four weeks earlier—those who had previously received their first injection returned this week and last for a follow-up. At the same time, others waited in line for the first dose.

The clinic, located at the Marin Center/Fair Office, offers both the Moderna and Pfizer vaccine (depending on availability). The FDA authorized both vaccines in early December, and while both have similar rates of success, the time interval between doses differs.

According to the county’s “Distribution Model,” all three tiers within Phase 1A are currently eligible to be vaccinated; Phase 1B members can expect access to the vaccine by late January or early February. The phases and tiers are structured to prioritize the most critical health care workers first. Tier 1 of Phase 1A includes health care personnel and paramedics, among others. The umbrella slowly broadens until Phase 3, which includes younger adults and children of the general public.

Dr. Brian Nishinaga, an emergency medicine physician, was among the first Tier 1 responders to receive both doses. Nishinaga reflects on his reaction after receiving the vaccine, something he was appreciative to experience despite the side effects.

“Physically, after the first vaccine, there was some soreness in the arm. The following morning I had very mild congestion when I woke up and a scratchy throat.… [but] by the time I got out of bed, I felt completely fine,” Nishinaga said. “[The second dose] also hurt in the arm, just like any vaccine or shot does, and then about 30 hours after the vaccine, I felt this bone-chilling cold.… It was this four-hour window of chills, aches, not much energy, but it did not last long. By the next day, I was totally fine.”

Upon arrival at the vaccine clinic, patients are checked in and filtered into different lines depending on whether they have an appointment. Day-to-day methods of organizing patients vary slightly; however, the overall structure remains the same. All patients receive a “COVID-19 Vaccination Record Card,” which marks the dates of the recipient’s first and second dose, the clinic’s “lot number” and the vaccinator’s signature. Patients are instructed to keep their vaccination cards as they will need them for the second dose.

The site is staffed almost entirely with volunteers working behind computers, answering patient questions and directing traffic. According to Marin County Assistant Emergency Services Manager Woody Baker-Cohn, many of these volunteers are also medically trained and are stationed at a first-aid site. There, patients sit at socially-distanced tables for 15-30 minutes to ensure no reaction occurs after the injection.

“We ask [recipients] to stay around [after receiving the vaccine], just to make sure that there’s no reaction.… We do have paramedics on site, along with nurses, who are doing the vaccinations, but we have also set up a first-aid observation area, so if somebody does have trauma, we can very quickly deal with it,” Baker-Cohn said.

Already, the clinic’s expansion has forced the Emergency Operations Center (EOC) to look to agencies like the Marin County Fire Department and Marin County Search and Rescue (SAR) team for additional volunteer support. The state has even authorized help from certified Emergency Medical Technicians (EMTs), such as Marin SAR member and clinic volunteer Troy Evans, to take on vaccination-shifts. Evans, along with other volunteer EMTs, was required to refresh his injection training before beginning his first shift; however, he is grateful for the opportunity to take part in the operation as a vaccinator.

“[Volunteering feels] absolutely wonderful. I do a whole bunch of volunteer work—whether it’s through helping people on snow who are hurt, injured or confused and keeping them safe, fostering and training dogs or through SAR—but [vaccinating] was probably one of the biggest highs. It really was,” Evans said.

Baker-Cohn recognizes the rapid growth of the vaccine operation as the county slowly shifts closer to Phase 1B. He is hopeful to soon relieve clinic volunteers with the support of outside facilities such as local pharmacies and doctors’ offices, once there are enough vaccines.

As the county slowly opens the clinic to Phase 1B members, the vaccine will become accessible to a greater population of people, many of whom may be skeptical about the shot. Nishinaga encourages those around him to receive the vaccine as soon as it becomes available.

“There’s a misperception that this is a rushed vaccine [and] that we knew nothing about COVID-19 in March. The fact of it is that we’ve known about coronaviruses and other viral infections for a long time, especially if you think back to SARS and swine [flu]. We’ve had that information, and they’ve been working on similar types of vaccines for years,” Nishinaga said. “This was not, as people perceive, just a magical vaccine that rushed to creation in nine months. Therefore, it’s safe.”