Sexual misconduct in high schools is a massive national issue, and the ability of school administrators to handle it is an even larger one. As reported by local and national news organizations, a rape victim attended school with her rapist for months in New York, a teacher groped his students for 20 years in Illinois, a 10-year-old boy’s claim that his teacher had molested him were ignored in Michigan. It does not end there. An endless number of instances involving sexual misconduct are unreported across the country. In the past few years, extensive efforts have been taken to prevent and punish sexual assault incidents on college campuses, but not all high school halls have received the same attention.

Title IX, a federal law protecting individuals from sex-based discrimination, may seem unfamiliar to some school districts with loose policies that make it easier for sexual misconduct to prevail. Unlike these districts, TUHSD is lucky to have a designated Title IX coordinator, Wes Cedros, who was unavailable to comment on this story. However, in extreme cases, the hands of administrators nationwide are tied by judicial requirements, such as having to comply with incompatible court regulations, and many fear that the new Title IX rule, finalized on May sixth, 2020 by Secretary of Education Betsy DeVos, would tighten this rope.

According to the AAUW study “Crossing the Line: Sexual Harassment at school,” only nine percent of instances involving sexual harassment in grades seven-12 were reported to an adult at school. The study suggests that this may be because victims did not realize the event’s significance, did not recognize it as inappropriate or did not feel comfortable reporting it. While it is up to schools to implement preventative measures and create an environment that encourages victims to come forwards, Title IX provides legal instructions for what to do after a complaint is made. Administrators should then work with the law to create specific steps that can be implemented and possibly adjusted to fit each individual case. Ideally, this would allow sexual misconduct to be addressed in a confidential manner that maximizes victim comfort and provides appropriate consequences.

Under Title IX, a school district must take immediate action to end, prevent and remediate the effects of harassment after it has been reported or they have been given reasonable belief that an instance of sexual misconduct has occurred. According to an investigation conducted by nonprofit educational news site The 74, there have been cases in which superintendents of school districts did not know they had to comply with Title IX and administrators knowingly did not investigate instances of sexual misconduct. Additionally, because districts are not required to report sexual misconduct, they face limited accountability for enforcing Title IX.

DeVos’s Title IX rule that would take “the important and historic step of defining sexual harassment under Title IX and what it means for a student to report it.” It would also require “schools to respond meaningfully to every report of sexual harassment, and ensures that due process protections are in place for all students,” according to the U.S. Department of Education. 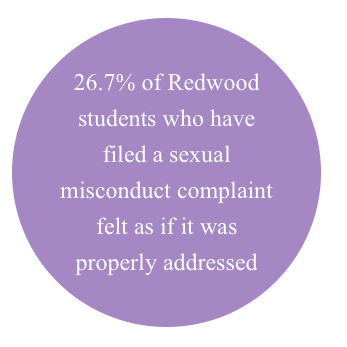 Some significant points of the new Title IX regulation are that it requires schools to offer accessible options to report sexual assualt and “empowers surviviors” to control how a school responds to sexual assault. It also offers equal rights of appeal to both the victim and perpetrator, only considers complaints formally submitted by a teacher or Title IX coordinator and limit the types of allegations subject to Title IX regulations.

The rule has been met by wide scale criticism from school administrators, parents and the media who think it would further restrict school districts when evaluating, investigating and resolving sexual misconduct complaints. There are also concerns from victim’s rights organizations such as the National Women’s Law Center that the rule would put too much focus on the rights of the accused rather than the accusers.

Regardless of the new regulations, which will be implemented on Aug. 14, Taupier says TUHSD will continue with its current system of acknowledging and addressing sexual misconduct.

“We’re going to keep doing what we’re doing and we’re going to do the right thing regardless of what the federal government guidelines are. They’ve been a little all over the place in the last couple of years, we’ve had to in some ways fend for ourselves,” Taupier said. “I think just making sure that we are setting policies that speak to the serious nature of it and that we’re going to continue down that path and not make adjustments.”

Although discussing sexual misconduct may be difficult at times, it is an important conversation to have in order to ensure victims have access to all necessary methods of support. TUHSD has a variety of resources, such as Wellness Center counselors and Peer Resource, along with victim support clubs at some schools, that work to uplift victims. Taupier encourages students to take advantage of these resources and is optimistic that the nation’s attitude towards sexual misconduct will improve as the topic becomes less taboo.

“[Sexual misconduct] is a hard conversation to have sometimes because it can be a very nuanced situation. But I think it’s very important and it’s great that we’re gaining greater clarity as a society around it,” Taupier said.