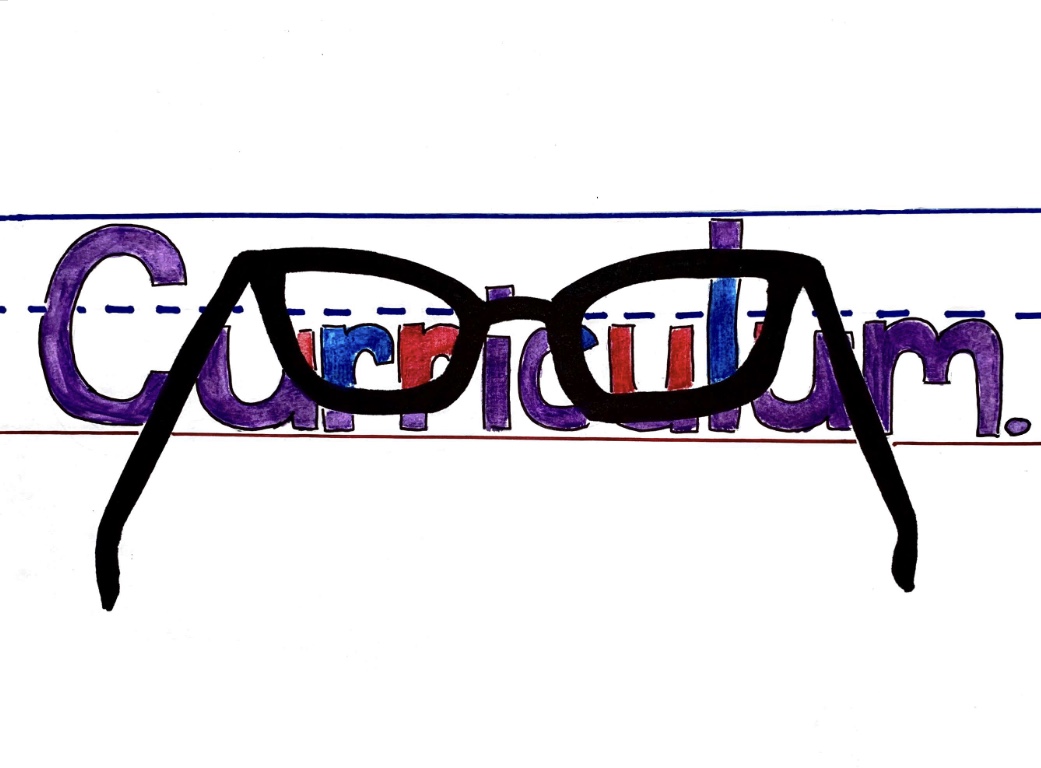 Inside classroom walls: how bias affects the younger generations of America

The United States is a divided country in many ways. Our two primary political parties are growing polar opposites, the gap between the rich and poor is increasing and the states have drastically different laws regarding abortion, gun control and several other issues. Diversity is important to America, but there is a difference between diversity and conflict.

Because of these conflicts and ulterior motives, people have become distrustful of online information and the media. Hidden biases are embedded in numerous publications–even well-established, once respected news outlets are branded as “fake-news.”

Perhaps the most influential yet biased source, however, is the least suspected: schools.

From their first moments in school, children are taught to trust and believe virtually everything a teacher says. According to Dr. Jacquelynne Eccles, a professor at the University of Michigan, one of the developmental challenges children between ages six to 14 face is decision making, highlighting how most children are highly impressionable and not yet independent enough to trust their own conclusions. Schools are where children learn how to read, write, solve math problems, understand history and more. But what if everything a student learned had an underlying bias? By the time students are mature enough to question their teachers and think critically, how much of that knowledge is unconsciously biased?

Political biases are not just imparted upon students by their teachers. An investigation by the New York Times (NYT) comparing eight history textbooks used in California and Texas found that both states were rewriting history–literally. The textbook covers were identical, produced by the same authors and publishers, but each state had rewritten the textbook’s contents in order to describe many historical events and issues differently, trending toward the most common political or cultural beliefs of that state. Some examples include the following: different descriptions of the Second Amendment, adding or excluding facts about historical racial inequality and featuring a Border Patrol agent versus a Dominican-American family in a section about immigration. While neither textbook contained an incorrect version of history, the two clearly attempted to frame the events in favor of their respective beliefs.

One of the most prominent examples of these discrepancies appeared in a California textbook’s description of the Second Amendment. The book says, “The Amendment is often debated…. The Amendment seems to support the right of citizens to own firearms, but the Supreme Court has ruled that it does not prevent Congress from regulating the interstate sale of weapons.” Directly adjacent to that quote lies the actual Second Amendment: “…the right of the people to keep and bear Arms, shall not be infringed.”

The book evaluates the intention of the Amendment, embedding a liberal bias rather than allowing the Amendment to speak for itself, making it difficult for readers to form an opinion of their own. In the Texas textbook, there is no added commentary expanding on the Constitutional phrasing of the Second Amendment.

Keegan Searles is a current Redwood student who attended middle school in Texas. She  has firsthand experience of varying curriculums and feels they have a negative impact on the country.

“Knowing that my old friends in Texas may have not gotten the same learning, it’s kind of surprising,” Searles said. “Overall, I think it’s not good for America because everyone’s going to have different understandings of history and the facts.”

Surrounding atmospheres and curriculums contribute to bias and its impacts; however, teachers have an equal, if not greater, impact on influencing students’ beliefs. In fact, the average teacher affects more than 3,000 students during their career, according to WeAreTeachers, an “online media brand for educators.”

Junior Lara Burgert is a former Redwood student who moved to Scarsdale, New York in her second semester of sophomore year, which she described as similar to Marin: very wealthy and very liberal. Burgert attends Scarsdale High School, where she has recognized the permanent impact that a teacher’s bias can have on students.

“There are definitely people in one class who might not have the same views as [the teacher], but when we’re writing essays or something, it’s difficult to share your political view because you feel like the teacher might grade you differently…. People here are a lot more scared to talk about their political views [if they’re different],” Burgert said.

The fundamental cause that enables teacher bias in education lies in the flaws of the Common Core State Standards Initiative, the primary federal education standards that have been adopted by 41 states. According to Frank Labudzik, a Redwood special education teacher who previously taught at George Washington High School in San Francisco, Common Core does not regulate the specific content of lessons, just the skills that students should learn.

“[Common Core] is the skills you’re using to apply the content, so that’s where the teacher gets a lot of leniency,” Labudzik said. “In English or history, you’re going to be supporting a claim with two sources. But what content you are using is where the flexibility is.”

According to Labudzik, this flexibility gives teachers the ability to influence a student’s opinion.

“[A teacher] could say, ‘You have to come up with a claim and use these five sources to choose from.’ If those [sources] are all conservative or all liberal, it’s definitely skewing the students’ view.”

“A historian’s job is to impartially share history. We talk about perspective a lot in my history classes,” Kornfeld said. “[I ask my students], ‘How does your perspective shape how you are looking at this event? How do you then write this event without your own biases?’”

Burgert theorized about the potential impacts if a teacher does not provide multiple views.

“In high school we’re learning what our views are and how we feel about [politics], and I think that if you’re taught one thing in specific and you don’t look at multiple sides, you’re not really learning what your views are,” Burgert said. “So as you get older, it can be difficult to have an open mindset after being surrounded by people who restrict you.”

Despite the potential of political biases, allowing teachers’ personal freedom in their lessons can also work to counter excessive curriculum regulation, should that become problematic. In 1925, John Thomas Scopes was prosecuted by the state of Tennessee for teaching about Darwin’s Theory of Evolution. The theory, which is now widely accepted and still taught today, was illegal to teach in Tennessee at the time because it went against the beliefs expressed in the Bible. Although this example would not occur on such a drastic scale in modern education, it demonstrates that despite the possibility of state education standards being flawed, providing teachers with the freedom to choose their curriculum can counteract the barring effects state curriculum regulations may enforce. 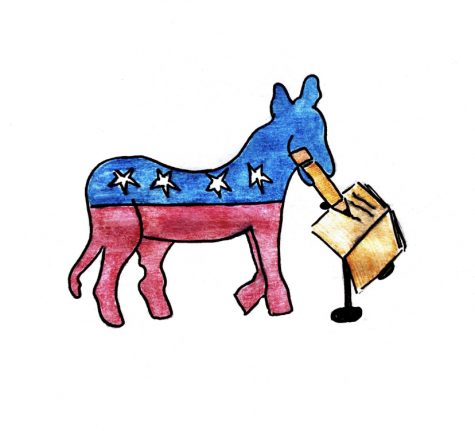 Allowing teachers to create their own content can also make learning much more relatable and interesting for student demographics that are not specifically mentioned in state standards. Both Kornfeld and Vanessa Kristal, an English teacher who previously taught at a charter school in Los Angeles, stress the importance of teaching culturally applicable topics, having come from schools with much higher Latino populations than Redwood.

Kristal was critical of the state standards, claiming they should be more nuanced in accordance with varying demographics in the classrooms.

“The cultural relevance of materials should be emphasized more because that’s really critical to the population that you’re teaching,” Kristal said. “I wish that was outlined more [by the state standards].”

While varying states can have drastically different political biases, they also play a key role in including culture around religion in the classroom. According to a 2019 survey by Pew Research, eight percent of all U.S. public school teens say a teacher has led their class in prayer, despite the fact that it has been ruled illegal by the Supreme Court to lead prayer in public school. However, those percentages differed greatly by region: in the South, 12 percent of schools included prayer on a typical day. In the West, roughly six percent included prayer and in the Northeast, two percent.

The same study also found that religion was far more prevalent in the South than in other regions of the country, reflecting the broader cultural trends of America. Labudzik saw the effects of  how school demographics affect the awareness of different religions by the school.

“Working in Washington, I wasn’t as aware of Rosh Hashanah or Yom Kippur [compared to] the Chinese New Year or Ramadan. I think it’s just a reflection of the demographic,” Labudzik said. 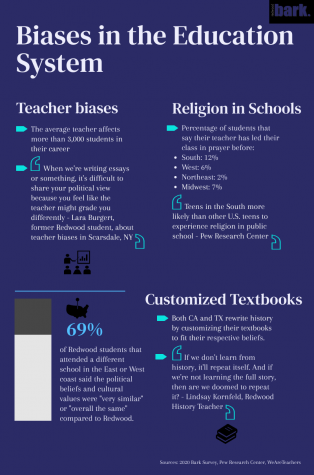 According to a peer-reviewed journal article by Dr. Mark D. Regnerus, “Regular church attendance contributes to less frequent conversations both about birth control and sex, but more frequent conversations about the moral issues involved in adolescent sex. Additionally, parents who attend religious services frequently display greater unease with sex-related communication, even after controlling for frequency of such communication.” The lack of sexual education across the country can be attributed to religious affiliation and the varying perspectives around sexual activity, therefore causing some schools to implement it into their curriculums and some schools not to.

Politically charged education standards cause biases to be imparted upon the next generation, then, once that generation teaches the new one, the cycle repeats. This plays a massive yet under-reported role in perpetuating today’s division within the U.S. Teachers also can play a key role in imparting their own opinions upon students; however, they can also act as a balancing force in correcting any flaws in the education system and teaching content that is culturally applicable to each community.

“We want everyone to learn the same history and we want them to learn the truthful version of history that includes the blemishes that America has gone through. I would hope that everyone in this country is getting the same history education,” Kornfeld said. “If we don’t learn from history, it’ll repeat itself. And if we’re not learning the full story, then are we doomed to repeat it?”