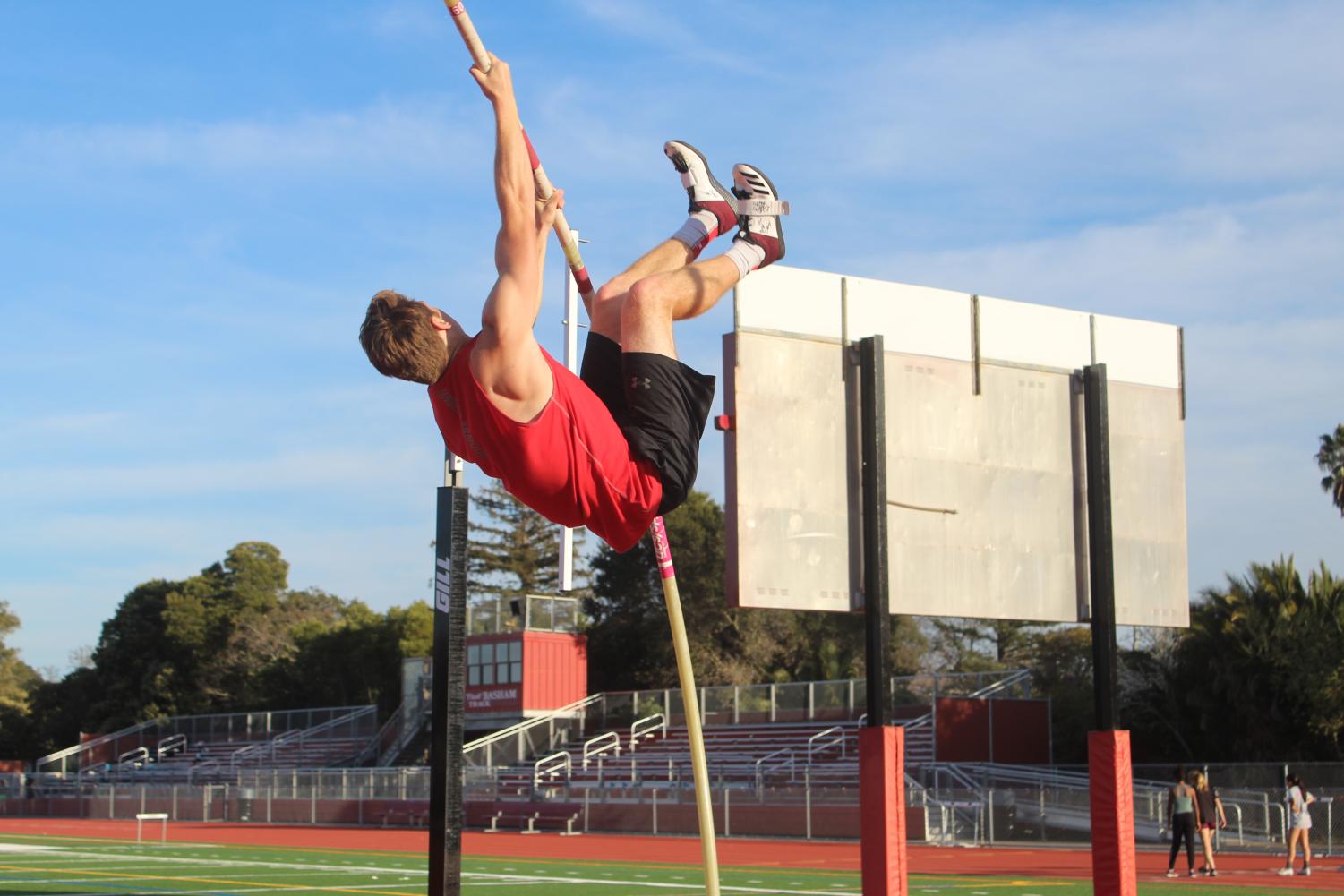 Field athletes vault, throw and jump their ways to triumph

100 meter race. 400 meter race. 4×100 relay. When someone mentions that they do track and field, these are the events that come to mind, along with images of boys in shorts that are a few inches too short jogging laps around a track. This idea, while somewhat accurate, fails to encompass the “and field” part of the sport. Field events provide a wide variety of options beyond running and often help teams earn crucial points to win meets. From propelling oneself as high as possible with a stick to chucking a weighted ball into a sand pit, field events provide many opportunities for athletes on the track and field team to put to use their varied skill sets. While some appear deceptively simple, field events involve a complex set of skills and techniques necessary for success in meets.

With a history in the Ancient Olympic Games as part of the pentathlon, long jump has been around for thousands of years and remains a popular track event. Junior Israa Mussa has been a jumper for the entirety of her high school athletic career.

Since then, Mussa has been both a long and triple jumper. Triple jump is similar to long jump in that one runs up and propels themselves off a board into a sand pit. However, the triple jump consists of three consecutive jumps rather than the single jump of long jump. While Mussa enjoys long jump, her main focus is triple jump.

“I have a lot of energy, so [triple jump] gives me that time to get more jumps in so that the last jump really has all the power and gets me the distance,” Mussa said.

Like many field events, Mussa says that triple jump requires speed and power, but it also requires a level of confidence from the jumper.

This year, both long and triple jump teams will be led by juniors Sofi Mincy and Sophia Rocha for girls, and senior Charlie Tantum and junior Tyler Achuck for boys.

As the name implies, the goal of high jump is to jump as high as possible. However, before doing this, a jumper must mark the distance in strides to the bar they leap over. Sophomore Yur Majesty Starbird began high jumping in middle school, and since then has strove to overcome the different challenges of it.

“[The hardest part is] getting your body over the bar without touching [the bar] because a lot of the time you think your body’s clearing it, and then your foot will hit [the bar],” Starbird said. “You have to focus on every part of your body getting over the bar.”

Clear by the 270 degree net that surrounds the throwing point, discus can be a dangerous event if not executed properly. Because of this, athletes work extremely hard on their strength, aim and technique, practicing the motions of rocking back and forth and spinning around several times. Sophomore Zachary Wexler, this hard work pays off in the form of satisfaction.

“It’s hard to get into the feel of it, but once you get into it, it’s really enjoyable, and you make a lot of new friends,” Wexler said.

Wexler has now worked in and out of practice on strengthening his legs and perfecting technique in order to throw the 3.5 pound (girls throw a 2.2 pound disc) discus as far as 75 feet.

During the shot put event, girls throw an 8.8 pound ball, while boys throw a 12 pound one, with the goal of propelling it as far as possible in any direction.

While senior Ella Blazei does not always throw in meets, when she does, it often brings points to the team, including at an important meet against Drake and Tamalpais High Schools.

“Our old coach Laura had tallied up all of the points,” Blazei said. “We were a couple points short and she came up to me and asked me if I would throw [for shot put]. I ended up getting first place, and it was the exact points that pushed us over, and we won the meet.”

While shot put and discus are similar, the main difference is the technique of pushing the ball in shotput and the object being thrown; in shot put it is a weighted ball, while for discus it is a disk. Both of the boys’ throwing events are led by senior Frankarlo Gonzalez-Osorno, while the girls’ are led by sophomore Gabby Levin-Meer and sophomore Kylie Bogert.

Throughout the years, pole vault has been offered irregularly at Redwood depending on the availability of coaches. Because of this, the event is relatively less popular to athletes than some others. This year’s team has only two experienced participants, one of whom is junior Jackson Moseley. Moseley has worked hard to learn and perfect the technique of the pole vault.

“You carry a big stick, usually 14 [or] 15 feet—you want to hold it by your side—and then it’s about 16 steps before you plant the pole. As you go up, you want to push [your] right arm up, swing your left leg and invert so you go upside down on the pole,” Moseley said. “Since it’s bending, it’ll spring you upward and shoot you over so you’ll be doing a handstand on the pole and then you go over the bar.”

Due to the sport’s obscurity, Moseley has found it hard to obtain proper training for the sport.

“There’s one coach in Marin, but [during the] off-season [since I] want to get good, I drive two to three hours Friday, Saturday and Sunday to practice [with a coach],” Moseley said.

This dedication has paid off, as Moseley was recently able to clear an impressive 14 feet two inches at the National Pole Vault Summit, merely an inch shy of the 1976 record set by Doug Ballinger.

O’Neil are captains and are also the only pole vaulters currently on the team. However, several younger athletes, including girls, have expressed interest, providing optimism for the future of the sport at Redwood.

The Giants compete next at San Marin against San Marin and Novato High Schools on April 2. 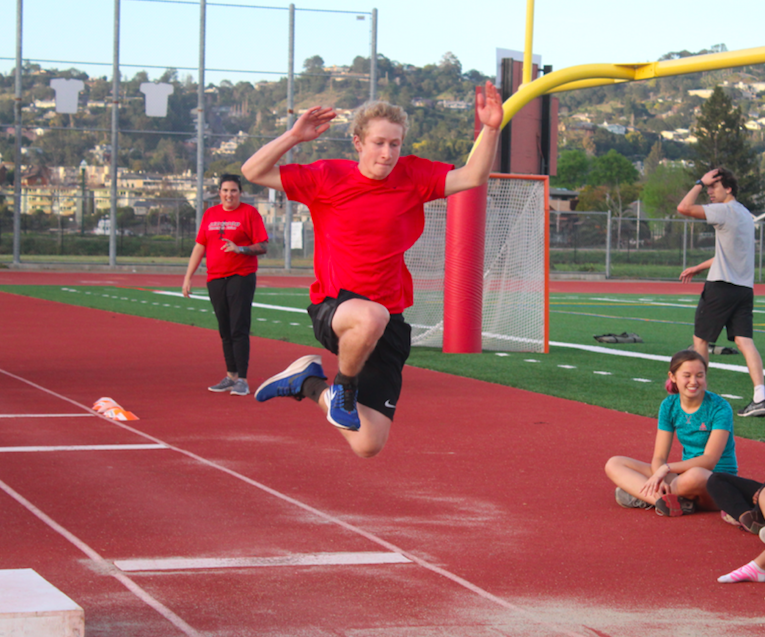