Playing on home turf, the girls’ varsity soccer team dominated San Rafael High School (SR) on Saturday thanks to a strong team dynamic and energetic spirit following senior day celebrations. The girls’ high energy and reliance on each other helped them effortlessly defeat SR by a score of 8-1.

Senior captain Sophia Curtaz was a standout on the field, making endless attempts to score and encouraging her teammates to maintain consistent effort despite a lead of 3-0 at the first half, especially with the outcome of their first match against SR of the season in mind. 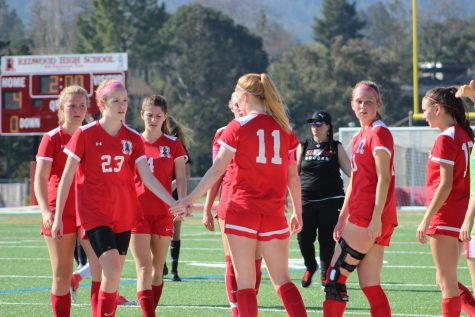 Coming off of the field to the benches, senior captain Grace Bouton high-fives her teammates.

“I was proud that we were able to maintain such a big lead in the game because last time we were head-to-head with SR we tied [with a score of 0-0]. I think in order to continue [dominating], we need to focus on scoring early, getting runs down the line and taking more shots,” Curtaz said.

The girls were able to achieve their goal of staying ahead early in the game due to strong defensive plays made by the sister duo of sophomore Riley and senior Delaney Anderson. Junior goalie Mia Hamant also succeeded in keeping SR from scoring during the start of the first half. Along with the aggressiveness of Redwood’s defense, a connected midfield kept the girls in possession of the ball for most of the game. According to Junior Elsa Davis, although the Giants could’ve easily lost their momentum, it was important for the team to play like they would if they were behind to maintain their motivation to win. Although SR isn’t one of the Giants’ top competitors, Davis stressed need to stay determined in order to implement good habits on the field.

“We played a strong game today but I think we can definitely work on implementing our set plays for the more challenging games we have to come. Even though I wouldn’t call our game today a huge challenge, it’s still important to keep our competitiveness,” Davis said. 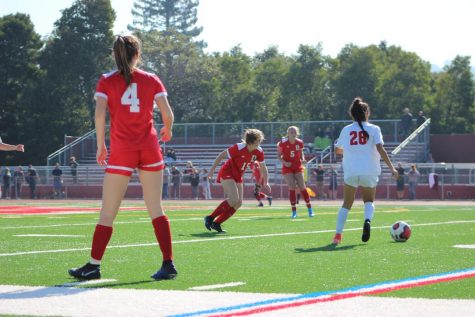 Preparing to shoot, senior Hana Lefferts uses her teammates for support on the field.

Along with constant effort from the players to take shots and stay focused in the game, teamwork was also a factor that tipped the score in Redwood’s favor. Before the game, the team’s underclassmen were able to bond with the seniors by giving them posters that recognized their accomplishments and friendships. Senior posters are given at the last home game of the year. Throughout the game, senior captains Curtaz and Grace Bouton supported each other on the field, allowing Bouton to score twice and Curtaz once.

A new addition to the team as of two weeks ago, coach Elizabeth Snearly was also pleased with how the girls played against SR, and is happy that the seniors, who are among the main leaders of the team, were recognized for their dedication to the sport. To Snearly, the captains this year have been especially helpful in her adjustment to becoming head coach.

“Grace Bouton, Sophia Curtaz and Delaney Anderson have been steadfast and driven leading a talented team full of skillful players. I value teamwork, commitment, creativity and confidence and feel my role is to encourage the girls to play freely and at the confidence level their skills deserve,” Snearly said. 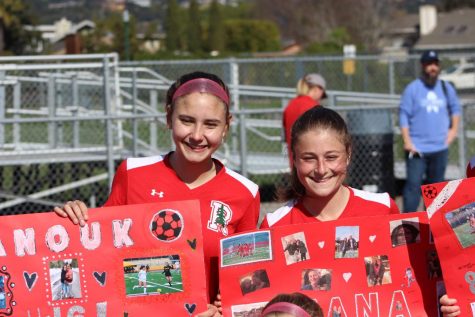 Enjoying receiving posters and food on senior day, Hana Lefferts and Anouk Guilhaume were determined to keep their excitement throughout the game.

The Giants hope to continue bonding throughout the year and strengthening their plays in order to prepare for tougher games. The team’s next game is at Marin Catholic, Feb. 5 at 3:15 pm.