Standing at six feet, five inches, Ains Fish towers above most freshmen. However, his height is not the only thing that makes him unique when compared to most freshmen. He is also a key member of the boys’ varsity basketball team. Despite now being the starting power forward on the team, basketball wasn’t always his favorite sport. He was a promising baseball player until his mom signed him up for a basketball camp around the fifth grade. Since then, Fish claims the speed of basketball is why he enjoys playing so much. 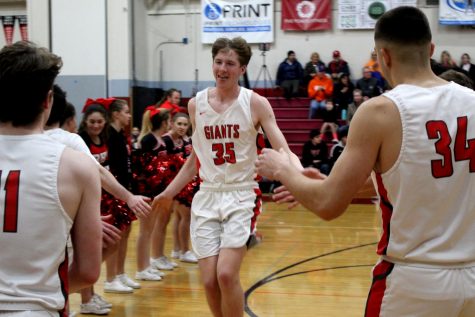 “I like the pace of the game, it’s a lot faster than football and baseball because of how much constant running you do…so, my favorite part is getting up and down the court. I’m not the fastest guy, but I like playing fast basketball,” Fish said.

Over the summer, Fish participated on the freshman summer league team, then played in a few junior varsity tournaments before he was brought up to play on varsity in the fall. As Fish continued to improve, he found himself in the starting five.

According to the boys’ varsity head coach, Jay Demaestri, he was impressed with Fish’s skill level on top of his basketball IQ in the fall preseason and throughout tryouts.

“I always thought [Fish] definitely had the size to play at the varsity level, but he also has the mind. He is a true basketball player and understands how the game is played. [He is] not just physically imposing,” Demaestri said.

When the final roster was released, Fish was ecstatic and ready to begin the new season. Coming in as a freshman, he did not know what to expect, as he would be the youngest on the team. Thankfully, his teammates greeted him with open arms.

Demaestri also believes that Fish is coachable and is always trying to learn new things about the game, which can take him to the next level as the season progresses and over the course of his basketball career.

“[Fish] is a great player to coach…He’s worried about trying to figure out why things are happening, not just do it because coach says. I always preach, don’t be a robot, be a human being, ask questions. You’ve got a question, ask it, and that’s what he does,” Demaestri said.

During the offseason, Fish plays for the North Bay Basketball Association for coach Michael Turner. Turner says Fish is extremely valuable because his game has so many dimensions to it. Turner adds that Fish’s natural ability to lead his team is another reason he is such an important player.

“Ever since I have coached him, [Fish] has been a natural leader. Our teams traditionally have gone the way he goes. If he’s playing well and he’s engaged, we do well. He is also very good at rebounding, being an inside force, scoring the ball and distributing. He does a little bit of everything,” Turner said.

According to one of Fish’s high school teammates, junior Tommy Quanstrom, Fish brings energy and effort while having fun with his teammates every practice.

“[Ains] is a hard worker on the court. He goes hard all the time and off the court, he’s fun to be around. All the guys hang out with each other [and] he’s just a fun kid [to be with]…He’s a goofball,” Quanstrom said.

As Fish continues to work on his game, he adds that over the next year, he is going to transition into being able to play more than one position expanding his game and making him even more of an asset.

“Right now, I’m more of a big [which means] I’m in the paint as a post player doing post moves. This offseason, I’m going to try to switch to more of a guard and work on my driving and ball handling.” Fish said.

Turner believes that if Fish keeps on track, works hard and focuses on improving every year, his future as a basketball player at Redwood is bright.

“Depending on how hard [Fish] works and puts into the game, I think he can be one of the better players to come out of Redwood. He has to develop to be more of a perimeter player, but I would anticipate [he will] and be disappointed if he didn’t end up becoming player of the year at some point,” Turner said.