Lacing drugs with drugs: the fatality of fentanyl 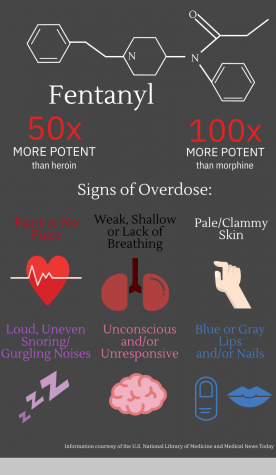 Weak pulse. Shallow breathing. Blue lips. Pale skin. Loss of consciousness. These are all signs of opioid overdose, and a leading cause behind these overdoses is fentanyl.

Fentanyl is a synthetic opioid, meaning it does not occur naturally like other drugs in the opioid classification, such as morphine or codeine. Because it is manufactured in a laboratory and was originally developed as a powerful painkiller, fentanyl is 50 times stronger than heroin and up to 100 times stronger than morphine, according to the Centers for Disease Control and Prevention. Though Marin may not be at the center of the opioid epidemic, fentanyl is still present, causing overdoses to be a pressing concern, even within Redwood.

On Jan. 14, Wes Cedros, the Tamalpais Union High School District (TUHSD) senior director of student services, sent out an email to staff that opened with “Opioid use and overdose is a serious problem facing our country and the TUHSD community is not exempt from this risk.”

Cedros’ claim that overdose is a critical issue in our community was correct. In 2019, opioids were responsible for 30 deaths in the county, according to the California Department of Public Health.

One of these deaths was Trevor Leopold, a former Redwood student. Since Trevor’s passing on Nov. 17, 2019, his mother, Michelle Leopold, has worked diligently to raise awareness of fentanyl around the community.

“We’re choosing to say [Trevor] was poisoned by fentanyl because he didn’t choose to use fentanyl. He thought he was using something else,” Michelle said. “Fentanyl is appearing in all drugs, all of a sudden, and it’s getting worse and worse. It’s totally an epidemic.” 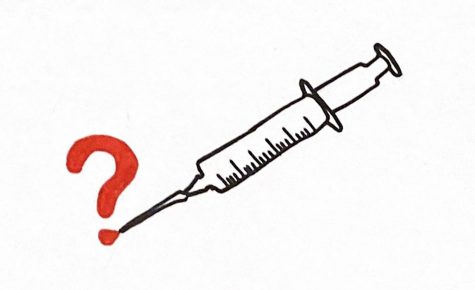 Cases such as Trevor’s are becoming increasingly common. Due to its potency and accessibility, drug dealers often spike other drugs, including cocaine and heroin, with illicitly manufactured fentanyl. Jeff Peterson, a school resource officer and drug recognition expert for the Central Marin Police, has seen firsthand how people come in contact with fentanyl.

“An opioid that is ‘just’ heroin, or maybe even ‘just’ a prescription pill, could be laced with fentanyl,” Peterson said. “The people that are distributing [fentanyl] are mainly distributing it because it is so cheap to make and a little goes a long way. So they are lacing a lot of [other] drugs with [fentanyl] to make [them] more potent.” 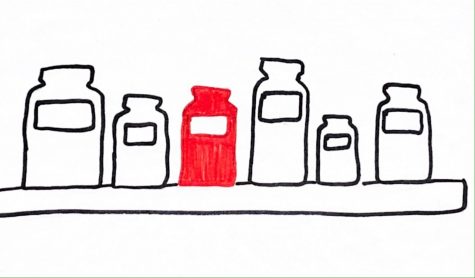 Because fentanyl itself is so strong, drug dealers are able to make more products for cheaper while maintaining the same potency by lacing common recreational drugs.

Sueann Kim, an addiction psychiatrist at Kaiser Permanente, has observed fentanyl in a wide range of drugs.

In a study conducted by the Insight Safe Injection Facility in Vancouver, 86 percent of drugs in both pill and powdered forms tested positive for some level of fentanyl.

Taking substances that contain fentanyl can rapidly become lethal. Not only can a slightly higher dosage than intended cause overdose, but often dealers create fentanyl with unknown potency, according to Kim.

“In order to get around detection of [fentanyl], those who manufacture [it illegally] will [purposefully] change the compound of the drug just slightly,” Kim said. “So the usual amount of fentanyl that someone [is] taking off the street may be a different compound of fentanyl [that is] much more potent and [puts] that person at an increased risk of overdose.”

These altered forms of fentanyl are called analogs, and they are often sold as heroin. However, Michelle stressed that fentanyl is not just a risk for heroin or other “hard” drug addicts.

“This is the beginning of the fentanyl [epidemic] where everybody is saying ‘It’s just an addict’s problem. It’s just killing addicts.’ It’s not just killing people that are taking heroin or smoking fentanyl or using fentanyl,” Michelle said. “It’s going to get worse before it gets better. That was one of the reasons why when Trevor died I said, ‘We can’t keep this quiet.’ We need to prevent other people from dying from fentanyl poisoning.”

While working the “graveyard” shift (from 6 p.m. to 6 a.m.), Peterson said he has been on call for several situations involving fentanyl.

“I’ve been on a couple of calls where there have been overdoses and in all of the situations, they were revived by naloxone, and the paramedics got there quick enough to get [them] to the hospital and stabilize them,” Peterson said.

Naloxone, often referred to by the brand name Narcan, is an opioid antagonist in the form of a nasal spray used to reverse overdoses. Currently, at least 20 out of 36 pharmacies in Marin carry naloxone, and since Dec. of 2017, the TUHSD has provided the opioid reversal on all of its campuses. According to Deborah Meshel, the district nurse, naloxone has no negative consequences, and it is a lifesaver when treating overdoses.

“If you [wrongly suspect] someone is having an opioid overdose…and you give [them] Narcan, it does not harm them. It just blocks the receptors to the brain so that the opioid cannot get into the brain, but if there is no drug in the system, then it does not [have any effect],” Meshel said.

Administering Narcan involves little more than inserting it into one’s nostril and pressing a plunger firmly. Meshel advocates that faculty members especially should be trained on how to administer naloxone so they can quickly assist someone having an overdose. Anyone interested in learning how to provide Narcan can contact Meshel by school phone or email.

“It takes time for the EMTs to get there. [Narcan] is super fast and easy to [use], so it is good if everybody gets trained on how to [use] it,” Meshel said.

Despite growing access to naloxone, the only surefire way to avoid overdose is to avoid using drugs. Peterson gave advice to anyone using or considering the use of opioids.

“Talk to an adult or talk to a friend. Tell somebody before you go down that road because it is just so easy to get yourself hurt in dealing with opioids, especially fentanyl,” Peterson said. “It hurts not only the person that is using the drug but [everyone] around them.”

Michelle had a similar sentiment due to her personal loss, expressing that it is no longer safe to assume a drug is clean.

“[Trevor] loved skateboarding, snowboarding and skiing. He loved his pets. [He] loved his family…He had a huge heart,” Michelle said. “[There are] too many moms like me who have lost their kids recently to fentanyl poisoning. Do you really want to put your mom in the same boat as me?”