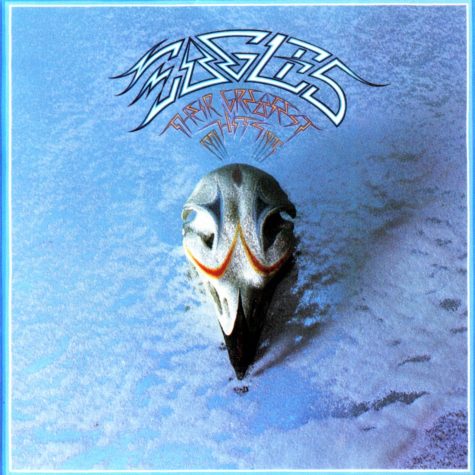 After their debut in 1971, the Eagles became one of the most iconic American bands of all time. They cemented their legacy in country rock and brought to life several hit songs that, even now, are frequently heard in places from bustling cities to open countryside to foreign nations. Now, 49 years after the start of their career, the group will perform at the Chase Center on April 11 and 12 in their final tour. To commemorate the end of an era, let us remember some of their most iconic songs, specifically in their legendary and best-selling album of the 20th century: “The Eagles Greatest Hits 1971-1975.”

“Take It Easy” seems to be the motto for how the Eagles have lived their life so far. From when they first met in the 1970s until now, they embodied an easy-going, content attitude effectively portrayed through the song. The laid-back connotation with lyrics such as “I’m standing in a corner in Winslow, Arizona/it’s such a fine sight to see,” “Take It Easy” is the perfect sing-along tune that can mold to any mood or experience. However, the song belongs in one place more than any other: the road. The adventurous and care-free attitudes make any road trip into an adventure, even if it is just a drive up to Costco.

As the second single released from their first album, “Witchy Woman” marks the beginning of the Eagles’ reign and songwriting career for lead singer Don Henley. As Henley describes it, the song is “the kind of stuff they play when the Indians ride up on the ridge while the wagon train passes below. It had a haunting quality.” The song differs from the typical relaxing tune of the Eagles to convey a more exciting atmosphere.

Headed by Glenn Frey, their second lead vocalist, “Lyin’ Eyes” tells the story of a woman cheating on her husband who is constantly out of town spending his money. The lyrics reveal the internal conflict she faces between the guilt and satisfaction she derives from cheating and mentions how her husband can see through her lies. These elaborate lyrics turn the song from a meaningless compilation of lyrics to a story. “Lyin’ Eyes” is one for the ages and is a song that will melt hearts.

“Already Gone” is the most upbeat song in the album, utilizing catchy lyrics such as “Cause I’m already gone/And I’m feelin’ strong/I will sing this vict’ry song” and a significant electric guitar presence to capture the lively mood of Southern California in the 1970s. Playing the song allows the listener to experience (or relive) the excitement of the time period.

Desperado is so incredibly pure. The lyrics, which focus on the importance of love and community and the emotions felt without them, along with the nostalgic melodies of the piano and violin, make it my all-time favorite. Matching Henley’s powerful vocals with the timid presence of both the piano and violin allows the listener to internalize the words and emotion in Henley’s lyrics. It is empowering, moving and emotional, everything you could ever want from a thoughtful song.

“One of These Nights”

If I had to choose one song to showcase the talent of each Eagles member, it would be “One of These Nights.” It has it all: Henley and Frey’s compatible voices, Randy Meisner’s high vocal range and an incredible guitar solo. The song is more than pleasing to the ear; it makes a statement about the time period by referring to incidents such as Watergate and the beginnings of disco music. For both its message and sound, “One of These Nights” is a powerhouse.

True relaxation and peace can be difficult to achieve, but one way to get there is by wearing a pair of headphones with “Tequila Sunrise” playing. The gentle guitar paired with the band’s blend of breathy voices makes the song calm and simple. Although the song tells a story of a troubled man longing for a woman, “Tequila Sunrise” remains a soothing and somewhat nostalgic hit.

“Take It to the Limit”

Although Henley and Frey headed the majority of the group’s hits, Meisner, primarily a guitarist, held a secret weapon that was revealed on “Take It to the Limit”: his high-pitched voice. A perfect example of the Southern California sound, a mix of country, rock and folk. The song is one you can sing along to and, at the same time, reflect on.

Similar to “Take It Easy,” “Peaceful Easy Feeling” is the perfect song to blast driving down an open countryside. Once you listen to it a few times, you’ll never forget the catchy lyrics and masterful melody. It can transform any mood into (you guessed it) a peaceful easy feeling.

“The Best of My Love”

“The Best of My Love” is a song that has the potential to evoke emotions like no other. Inspired by Henley’s break up with his girlfriend, the song appeals to all the broken hearts. With lyrics such as “You see it your way and I see it mine/but we both see it slippin’ away,” the song shows a deeper level of thought and understanding.