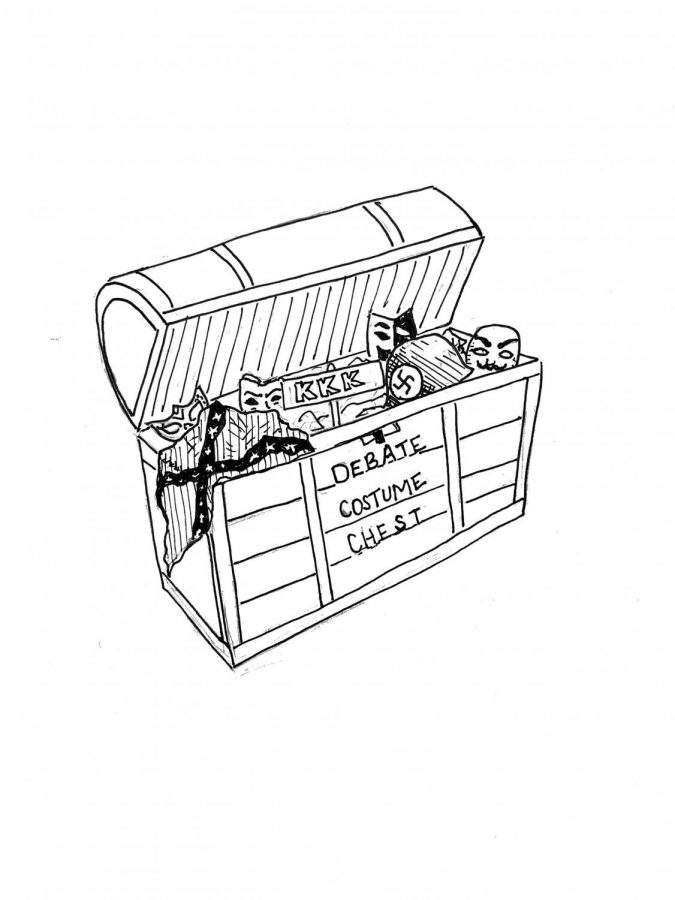 Editorial: Historical simulations in classrooms should be left in the past

This past spring, an 11-year-old student was assigned to perform the Nazi salute while portraying Adolf Hitler for a “Living History” project at the McFadden School of Excellence in Tennessee, according to the HuffPost. For weeks following the incident, students witnessed their classmates exercising the salute outside of class. Uncomfortable with the appalling actions of her fellow classmates, a student spoke up in class, but was told by her teacher to “not address it again.”

This past November, a Redwood U.S. History class performed a simulated debate in which a 16-year-old white student assumed the role of a pro-slavery plantation owner involved in the historic Dred Scott v. Sandford case. Embodying his allocated role, the student defended African American subordination, saying, “they aren’t actual people.”

At a time where students are separated from issues like the Holocaust or slavery by a generation or more, it can be difficult to effectively portray the magnitude of these historical events while simultaneously being mindful of others’ related experiences. While intended to engage students in active conversations, the aforementioned simulations provided students with a platform to marginalize minorities without taking accountability for their harmful statements.

With this in mind, when addressing these sensitive issues, it is vital that minority students don’t feel isolated in the discussion, especially because of Redwood’s predominantly white demographic. Although we encourage every student to voice their opinion, allowing them to hide behind a character doesn’t achieve that objective. Alongside freedom of expression, every student has the right to feel safe and supported in their classroom environment. For this reason, teachers should utilize seminars and discussion-based learning to initiate actual conversation.

When engaging in classroom conversations, it is easy to confuse the different goals between open discussions and role-playing simulations. While discussions focus on helping students become aware of various viewpoints through personal opinions, role-playing debates force participants to take on a persona whose ideas can alienate minority classmates. Even though both types of conversation allow students to analyze historically controversial topics, only seminars and discussions foster students’ ability to synthesize information while developing their own perspectives.

Role-playing simulations can easily get out of hand, as demonstrated in the Stanford Prison Experiment in 1971. In the experiment, college students from across the nation volunteered to impersonate prisoners and guards in a simulated prison setting. After six days, the Stanford “prison guards” became so immersed in their roles that they eventually lost self-awareness and the ability to hold themselves accountable for their abusive actions.

Though the circumstances portrayed in this example are more extreme than what occurs during classroom simulations, the experiment’s results reveal how role-play can enable participants to abuse their allocated roles. This behavior is mirrored at Redwood when role-play is presented as an acting exercise that seemingly doesn’t need to be taken seriously.

Last year, a U.S. History class was assigned to simulate a lunch counter sit-in, where one group of students portrayed African American protestors while the other group played white employees harassing them. After a student in the class brought up their concerns with administration, the exercise was canceled. The cancellation was then met with backlash from several students who had volunteered to be the racist white employees, making the other students uncomfortable, according to a participant. This structure can easily be seen as an excuse for inappropriate, insensitive behavior as students may believe that their character acts as a protective mask for their actions.

With this in mind, we encourage teachers to hold open discussions or Socratic seminars rather than assigning roles in debates and simulations. Eliminating role-play regarding sensitive topics and replacing it with open discussions about those issues allows students to project their opinions in a collective learning environment while being held responsible for their actions and statements.

Instead of debating historical issues that have long been resolved, teachers could be using debates to discuss current local and national events or international headline stories. That way, students have an environment to express themselves while staying informed on important current news. Issues such as segregation have long been determined to be immoral, so bringing discussions of their morality back only sows seeds for bigotry.

We aren’t denying that role-playing can be an interesting way to break up the monotony of lectures. Embodying people from the past can bring the classroom to life, allowing students to become more engaged in the information. But more often than not, that objective isn’t met. If the real aim is to generate conversation on uncomfortable topics, presenting it in a Socratic seminar or discussion-based manner would maintain the seriousness of issues discussed while also encouraging meaningful conversation.