The line between free speech and hate speech 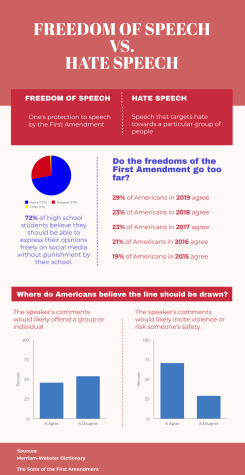 “[The restriction of free speech] is the most dangerous of all subversions. It is the one un-American act that could most easily defeat us,” retired Supreme Court Justice William O. Douglas said in 1953.

Merriam-Webster defines free speech as one’s protection to speech by the First Amendment. Hate speech, on the other hand, is defined as speech that targets hate toward a particular group of people. Although a gray area exists between the two terms, their meanings can be differentiated. These distinctions are important to make, especially in an educational setting that has its own rules involving the constitutional rights of students on school property.

The Board of Trustees respects students’ rights to freedom of speech no matter how controversial the subject is, according to Tamalpais Union High School District (TUHSD) Board Policy 5145.2. The only time students’ freedom of expression can be limited is when it is a matter of maintaining an orderly school environment and protecting the safety of all members of the school community.

Nationally recognized groups at Redwood such as Students Organized for Anti-Racism (SOAR) work to help combat and prevent hate speech on campus. SOAR started as a club in 2017 as a collaborative effort between advisors, administration, students and teachers within Redwood. Drama teacher, SOAR founder and advisor Erik Berkowitz understands that although students have their constitutional rights, there is a fine line between freedom of speech and hate speech.

“Everything from students of color [feeling] comfortable and that they’re being supported to a strong message saying ‘we don’t tolerate [hate] here’ is important. But you also have a responsibility to the students who have different opinions on your campus to make sure that they, too, are safe on campus, even if that speech isn’t tolerated,” Berkowitz said.

Oftentimes, students’ statements are unintentionally offensive, according to SOAR president and senior Lili Gibson. Gibson believes that minorities at Redwood constantly hear microaggressions, which she defines as any comment, whether intended or not, that targets a marginalized group and perpetuates stereotypes. Although microaggressions do not reach the same level of harm as major acts of hate speech, Gibson says they can still hurt people in marginalized groups.

Gibson’s knowledge is not just from a dictionary definition or what she has learned from SOAR; as a minority student, she has dealt with microaggressions and assumptions about her background throughout her life.

“One microaggression is when someone says to you, ‘Oh my gosh, your English is so good, but you’re from a different country.’ It makes you feel like an outsider alienated in your own land,” Gibson said. “Or when you’re the only one of a race in a classroom and someone asks to touch your hair. Sometimes they don’t even ask.”

Standing up for yourself in these situations is challenging, according to SOAR representative Israa Musra, and standing up for others can be just as difficult. However, on campus, students are able to share any opinions they might have, as long as their freedom of speech does not elevate to violent, hateful actions. Musra often finds it difficult to work up the courage to stand up for herself and others.

“It’s really hard for me to make that ‘in-the-moment’ decision to stand up for myself or someone else. I get speechless in moments of racism, but later on I think to myself that I should have said [something],” Musra said. 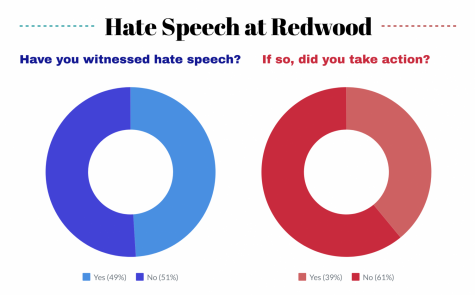 As seen through this data, reporting hate speech is a difficult thing for witnesses or victims to do. Because of this, the United Nations (UN) has stepped up by using their authority to combat hate speech.

On July 16, 2019, UN Secretary General Antonio Guterres unveiled the UN’s plan to combat hate speech. With the growth of international racism and intolerance, violent misogyny, anti-Semitism and anti-Muslim hatred, the UN aims to identify and prevent hate speech “by bringing together people with opposing viewpoints, working with traditional and social media platforms and developing communications guidance.”

Although hate speech may be an international issue, it is just as prevalent at Redwood. Current SOAR advisor and social studies teacher David Minhondo has recently helped develop and teaches the Ethnic Studies course. Ethnic Studies collaborates with SOAR in the development of its curriculum. Minhondo believes it is important to teach racial bias at Redwood because it is just as prevalent in Marin as it is in other places.

“Even though no one is running around in hoods and burning crosses, that doesn’t mean Redwood isn’t racist. Marin County can be a racist place even if we can’t see it,” Minhondo said.

While racism at Redwood and in Marin may not always be visible, minorities are constantly confronted by hateful jokes, whether intentional or not. Science and Leadership teacher Melissa Boles believes that she and her fellow teachers find it important to monitor jokes and conversations in their classrooms.

“Part of our job as teachers is to police for what is funny and what is offensive. One of the hardest things to learn is where that line is with humor between being funny and being inappropriate,” Boles said. “That’s a huge part of our job, to help kids find that line and help them understand the meaning of their language.”

While teachers want their classrooms to be safe places for all marginalized groups, they do have to respect students’ right to freedom of speech. Berkowitz complies with this by ensuring that all of his students feel supported when inappropriate comments are made. 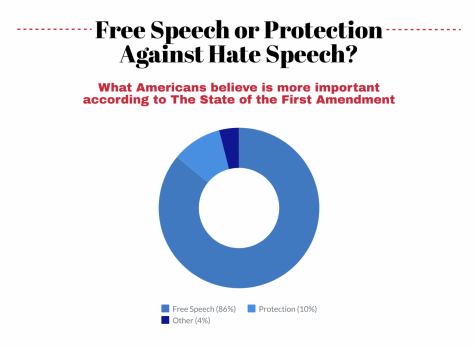 “Recently, my approach is to try and just say ‘Hey, no thanks, that’s not okay’ in a very casual way as to not totally shut that person down, but to send a message to other students that may have also heard that I’m in support of all of my students,” Berkowitz said.

Combating hate speech, however, does not just fall on individuals. SOAR is constantly taking steps to build a more positive community at our school. They recently began presenting to different classes around Redwood in an attempt to educate students about racism, microaggressions and the different effects those actions have on minority students on campus.

Despite this, in recent years, Redwood has faced controversy regarding where they draw the line between free speech and hate speech. Former Redwood student and controversial YouTuber Sophia Totterman, also known as LtCorbis, posted videos on her channel that prompted action on the part of the administration regarding the safety of Redwood minorities.

In light of this incident, Boles and the Leadership class focused on spreading positivity in the wake of the video’s release.

“We tried to put out positive messages on social media to counter any kind of hateful narrative that was going around,” Boles said. “We tried really hard to put out some positive vibes.”

In addition to Leadership taking action, the administration contacted the Redwood community directly in an email, which read, “Over the past few days, our school community has been confronted by some online messages that have raised questions and concerns among students, staff and our families. We hear your concerns, and assure you of our continued commitment to create and nurture a school climate that is safe, welcoming and inclusive of all.”

Although Principal David Sondheim could not give the specific actions administration took regarding the videos, he acknowledged that there is always room for improvement in regards to guaranteeing all students’ safety.

“There have been and there will be situations that make it difficult to [maintain and promote a culture and environment at school that values everybody and that is sensitive to everybody] either because we can’t do what we need to or feel like we should do. It is challenging and a lot of times the actions we take themselves create additional challenges,” Sondheim said.

There is not a cookie-cutter way to deal with problems that arise from hate speech, according to Sondheim. Each and every situation that arises has its own nuances and affects different minorities on campus.

“It’s often not just a simple case that is run of the mill. It’s more complex. Going through each of those [situations] helps us all to become more aware of what we say. Freedom of speech is a right, but it’s also a responsibility,” Sondheim said.

While the administration and teachers do play a crucial job in preventing and combating hate speech at Redwood, it cannot only be up to them, according to Musra, as there is only so much they can legally do. Musra believes that one way to prevent hate speech is through education.

“There’s a lot of internalized racism and systemic racism in our community that takes many years to combat. Right now what [SOAR is] trying to do is raise awareness and educate students,” Musra said.

According to Musra, is it important for everyone to be involved in combating hate speech on campus and in everyday life. SOAR meets in room 2020 on Tuesdays at lunch and they are always welcoming new members. You can also sign up for the Ethnic Studies class during registration in February.