The behemoth nature of global warming can often intimidate regular Americans and has sparked the debate over whether individuals can actually make an impact. According to NASA, climate change is already irreversible. Additionally they report that the most important next steps to take are towards the mitigation of emissions and adaptation to the changes already occurring in our natural world. Environmentally-conscious habits like the push to become vegan, the emphasis on recycling and the incentive to purchase electric vehicles may be endorsed by society. But what are the actual impacts that these celebrated trends have on our environment?

The vegan diet calls for the complete elimination of meat and dairy products in both eating habits and lifestyle. The diet has been marketed nationwide as a way for people to reduce greenhouse gas emissions produced by the meat industry, which generates 14 to 22 percent of the 36 billion tons of carbon produced globally each year according to the Food and Agriculture Organization of the United Nations (FAO).

In a recent Bark survey, 70 percent of students self-reported that they believe practicing veganism ranges from somewhat to extremely beneficial for the environment. But how environmentally friendly actually is veganism?

Veganism relies on the abundance of plant products for a purely plant-based diet. However, the environmental impact these products have frequently depends on how locally they were produced, something that often goes unmentioned in the promotion of the trend.

At the Agricultural Institute of Marin (AIM), CEO Andy Naja-Riese focuses on promoting the purchase of locally grown produce to reduce carbon emissions.

“One of the most important things that you can do to protect the environment is to buy food that was produced locally,” Riese said.“As much as you can shorten that path between where food is grown to where food is consumed helps to reduce your overall carbon footprint.”

According to the Cambridge Dictionary, one’s carbon footprint is the amount of greenhouse gases they contribute to the atmosphere with their activities and lifestyle. It can be greatly affected by what food one buys and where they purchase it from.

Through AIM, Riese works to promote farmer’s market shopping to encourage purchasing locally grown foods while still making it enjoyable for customers. However, he leaves it up to the customers for choosing to adopt veganism because he believes that “diets are very personal.”

“We really focus on diversity in terms of the types of foods that are offered. Some people will choose to adopt the plant based lifestyle, and that’s wonderful if that’s what they’re choosing to do. But we really focus on a variety of different food sources as well as a variety of different protein sources that will include animal products that are responsibly produced,” Riese said. 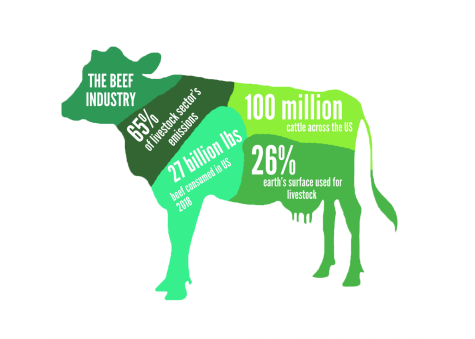 Current industrial systems of meat production have boosted their already negative effects, as there is a lack of resource rotation and a sole emphasis on manufacturing. Monica Dwight is the Environmental Education Associate at the San Francisco Department of the Environment (SFDE) and emphasizes the drastic environmental contrasts between beef and plant production.

The cost of production for a half pound of hamburger meat is much more than money and water—it is the equivalent of driving a 3,000 pound vehicle ten miles according to FAO, almost the distance from Redwood to Richmond in the East Bay.

Dietary sustainability can encompass a variety of choices, much more than how it is marketed. Paying attention to what food is bought and where it comes from can help to reduce emissions. Dwight believes in adopting “meatless Mondays” or a “flexitarian” lifestyle, which primarily encompasses vegetarianism with the occasional divergence to meat or fish. By just limiting meat consumption, individuals have the power to make a major impact through their diets.

“There’s a lot of stigma around being really harsh about ‘yes, I eat meat’ or ‘no, I don’t eat meat.’ But even just like eating less meat is like a really big way that you can make a difference,” said Dwight. “It wastes 565 gallons less water just by choosing to eat like one bean burrito instead of one beach burrito is pretty big… you can make a pretty large difference in just one meal.”

The Three R’s: reduce, reuse, recycle. It is a mantra taught to minimize the effects of climate change and, according to the Guardian, the emphasis that the country puts on recycling will never stop plastics from getting into oceans.

Instead the other two R’s, reducing and reusing, should be to the same standard of importance as recycling, though they should be. According to the Natural Resources Defense Council (NRDC), we can minimize our carbon footprint by simply reducing the amount of products we buy, or by purchasing higher quality goods that last longer. The NRDC also states that rather than recycling single-use plastics, a better alternative is to invest in reusable products that can be recycled after multiple uses.

Elizabeth Bagley, the Director of Sustainability at the California Academy of Sciences, attributes the extreme and almost exclusive focus on recycling to a lack of educational resources as well as attitudes towards the overarching issue of climate change.

“Sometimes, especially with environmental behaviors, people will say, ‘Oh, you know what? I recycle, so that’s good. I don’t have to do anything else,’” Bagley said. “That’s called the ‘one-and-done’ or the ‘checkbox mentality,’ where people say, ‘Oh, I checked the box. I’m an environmentalist. I did my part.’ But at the end of the day, that’s just not true. There’s so much more we can do.”

Although recycling is still an essential aspect in reducing our carbon footprint, it is only effective when executed properly. Bagley believes that it is important to look at recycling from an economic standpoint.

According to the Huffpost, Germany has a relatively efficient process of separating different recyclable materials in order to keep them organized. By having different bins for a greater variety of recyclable materials, Germany streamlines the entire recycling process and keeps the operation “clean.” This is an example of how recycling, when done properly, can have a beneficial impact on our environment and therefore deserves attention. 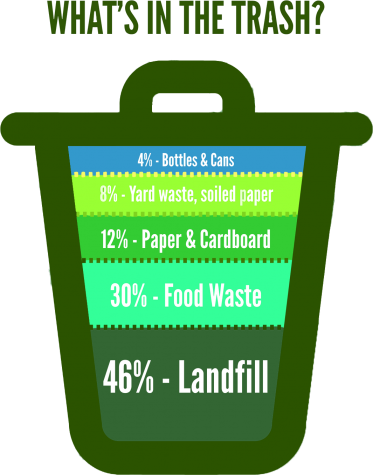 “Is recycling a useful thing to do? Yes, if there is a system––the core of all of sustainability is about systems. If there’s a system where the inputs can be turned into outputs that are actually making the earth better and using fewer natural and raw resources,” Bagley said.

The Marin Sanitary Service (MSS) is an organization that aims to tackle the issue of carbon emissions via the handling of waste in Marin. The Recycling Center is a subsection of MSS that focuses their efforts on maintaining the effectiveness of recycled material in Marin County.

According to MSS employee Casey Fritz, who is the Schools and Community Recycling Coordinator of the organization, properly-executed recycling can offset carbon emissions. They hold one of the best records nationwide for energy consumption and landfill organization and are 21 times carbon negative, meaning they have a net effect of reducing carbon from the atmosphere rather than adding it.

The Recycling Center maintains a dual-stream system of separated paper and plastic products. Through careful sorting process at their facility, the Recycling Center keeps their recycled material relatively “clean” and sell their raw materials to countries like China, who will then take it and use it to manufacture other items.

Jen Selvig is the Commercial Recycling Coordinator at MSS, and understands that there are both pros and cons for recycling. At the same time, however, she maintains that anything can make a difference to limit our current climate crisis.

“Some folks feel like our recycling goes on a long trip to be carried off and recycled in another country sometimes. I see, as a con, that there’s a carbon footprint there for sure. But, all in all, there have been life cycle analyses done on it, and there’s still a positive,” Selvig said.

In Marin, electric vehicles (EVs) are immensely popular due to their efficiency and environmental impact, but also due to the high population of wealthy families. According to Data USA, Marin has an average annual income of $113,908, while the rest of the country’s annual income is only about $60,336. Although they can save money in the long run by eliminating the purchase of gas, according to Quartz Magazine, EVs are a significant financial investment for most families as the majority cost around $55,600.

In addition to cost, EVs still produce emissions, despite being powered on electricity. According to the U.S. Department of Energy, there are two types of emissions that come from all vehicles: direct and life cycle. Direct emissions are those that are most commonly mentioned when condemning gas-powered vehicles, as they consist of the gasses released through the tailpipe. Life cycle emissions are less well-known and include fuel and vehicle production, processing, distribution, use and recycling or disposal. All vehicles produce these life cycle emissions, but EVs generally cause less because, in most cases, emissions while generating energy are lower than those from burning gasoline or diesel. 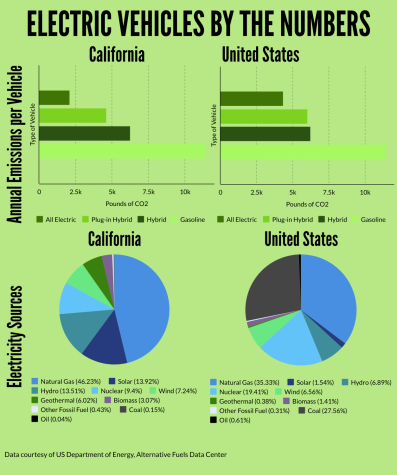 Dwight believes that although EVs have less life cycle emissions, there are still certain negative aspects to mass producing them.

“Creating the engines for [electric vehicles] can be problematic. The types of materials that we use for them are really scarce often. This can be really problematic, not only for pollution purposes, but also for political purposes in terms of the preciousness of certain metals,” Dwight said.

Different people will take different paths towards reducing climate change. Some may become vegans, some may focus on recycling and others may purchase electric cars. No matter the approach, NASA states that the most efficient action plan available is to avoid human further interference with the climate system.

“We’re all at different places in our lives, so what constitutes a sustainable life? What it should look like for different people really depends on where you are at as an individual,” Bagley said.