After winning their second consecutive Marin County Athletic League (MCAL) championship last year, the boys’ varsity soccer team is on winning streak and is looking to defend their title. With 16 seniors leading the team, the Giants are confident heading into the season.

Following an impressive last season led by ten seniors, key players Cole Hardister, Justin Nuestaetter and Nathaniel Kuffner have graduated. All three selected for MCAL’s “first team,” composed of 11 of the top players in the league.

With these players graduating, midfielder and captain Alex Johnson will return to the field for his senior season. During Johnson’s junior year, he scored three goals and averaged 0.4 assists, however, his season was cut short due to injury.

Another standout for the Giants is three-year varsity defender and senior captain, Stanley Gaither. Gaither is looking forward to the upcoming season as it’s his last season to play alongside his teammates of three years.

“A lot of us were on varsity since sophomore year. We’ve been playing together on the club and high school for a very long time,” Gaither said. “I’m just excited to get this season going.”

Gaither’s teammate of three years, senior forward Billy Gramajo, explained that because of this year’s large senior class, their starting 11 is already acclimated to the style and intensity of high school soccer.

“Compared to last year, we have a lot of depth on our team. It’s important because if someone gets tired, we have [another player] who can come in and keep the level of play high,” Gramajo said.

As the season begins, head coach David Siracusa acknowledges that his team is focused and already invested in the season.

“Everybody’s trying their hardest. The attendance and the maturity level is high. I don’t have to intercede with trying to get people to try hard. Now, it’s more about making sure that things go smoothly,” Siracusa said.

Gaither, Gramajo, and Siracusa agree that three main goals are to win the “triple crown”, in other words the MCAL Championship, Norcal Championship and State Championship. However, Siracusa has goals for his team off the field as well.

“[We want] everybody pulling for each other and trying their hardest all the time. Also having a mature attitude on the field,” Siracusa said.

Looking toward the season, Siracusa is eager to play one of Redwood’s toughest competitors, Terra Linda High School.

“The coach has got it going on over there. I have to be on my toes to make sure my team is prepared to play. They are a stick in our spokes every year, so I look forward to that game,” Siracusa said.

Jumping into the new season, Gaither explains that Redwood’s consecutive MCAL title puts a target on their backs coming into the season.. He looks forward to the challenge and can’t wait to get after it.

“Everybody kind of hates us in [MCALs] because we’ve won twice in a row. We are known to win MCALs, so everybody wants to take that from us. We [have to] protect our trophy and win it again,” Gaither said.

The Giants are looking forward to their next game, which will be against Terra Linda High School on Jan. 4. 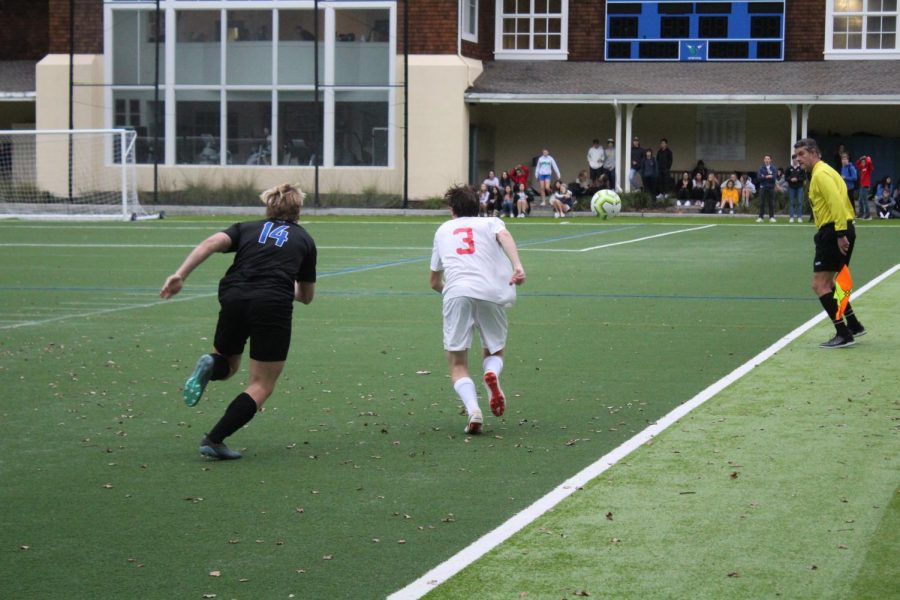 Gallery|6 Photos
Sprinting up the field, Keaton Fargo races to the ball.