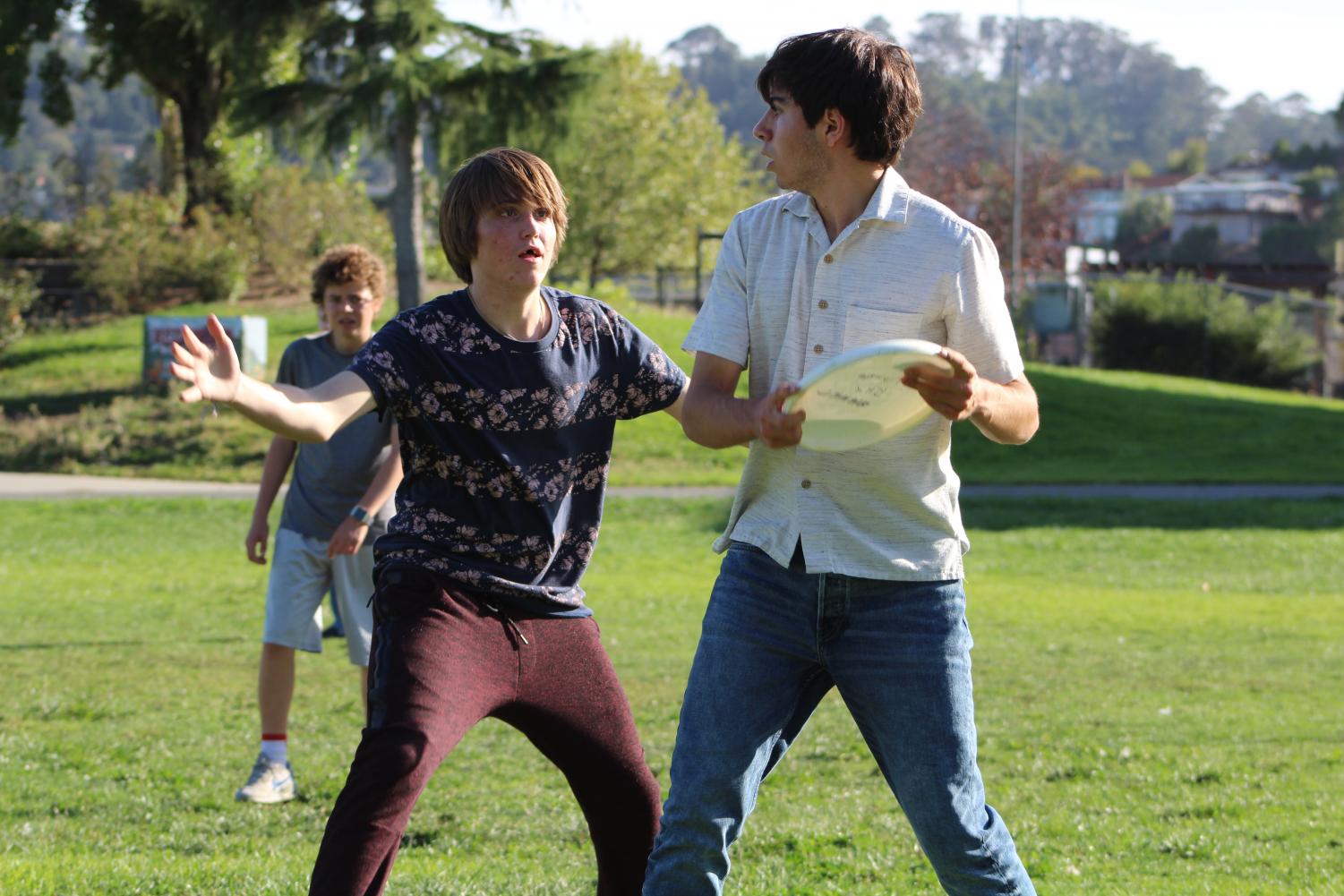 Gliding into the new season, the ultimate frisbee team prepares for a year of success

As the bell signals the end of a Thursday school day, a group of students gathers on the South Lawn, shedding all their stress and drowsiness from the long block periods. Discs in hand, they clear the field of both loitering students and geese to begin their hour and a half of practice. Taking a casual activity typically found in a physical education class or at the beach to a higher level, Redwood’s ultimate frisbee team embraces the more competitive side of the sport. The 12-member team, which is still continuing to grow, practices once a week to prepare for their upcoming games this season.

Redwood’s ultimate frisbee team was founded in the 1970s following the sports invention in 1968 by a group of high school students in Maplewood, New Jersey. Resembling many traditional field sports, the fast-paced game is played with 7 players from two opposing teams on the field at a time with the goal of getting the disc to the end zone.

Forty years after its founding, the ultimate frisbee team continues to prosper. Redwood has both an ultimate frisbee team and club that students can join. The club meets every Thursday, and is open to everyone throughout the year. Currently, the club consists of 12 players and has welcomed four new members this year. Due to the lack of local youth teams, this will be many of their first times playing for an organized ultimate frisbee team. Freshman Sam Zlot, for example, has played ultimate frisbee in the past, but not in the competitive team environment.

“I started playing ultimate frisbee at camp and I really enjoyed it,” Zlot said. “I joined the team to get experience outside of tossing the disc around with my friends and do something I have had fun doing in the past.”

Despite the substantial pool of incoming players, four-year-player and senior Charlie Tantum believes the team will become more cohesive once the new players grasp the rules of the game and basic skills.

“The biggest barrier new players have is being able to throw the frisbee, but it’s an easy skill to learn,” Tantum said. “It takes getting out there, throwing a lot and watching teammates play to improve.”

In years past, the team was entirely student led. However, this season , Sean Finlay is coaching the team for his first time. Finlay is new to the Redwood community, but has been playing ultimate frisbee since he was in high school. According to Zlot, the presence of a qualified coach at practices improves the productivity of practices and the overall quality of play.

“I have never learned much about [the rules] before. Now I’m learning what I’m supposed to do. I’m excited to continue learning new, small details and actually play games,” Zlot said.

Members of the club who desire a more competitive environment have the opportunity to join the official team. The team allows for a new challenge and gives players a chance to compete against other teams throughout the Bay Area.

In past seasons, the coach and captain have set up casual pick-up games against non-high school teams and high school clubs, similar to the one Redwood has. This semester, they hope to join a league and enter tournaments to gain more opportunities to play with the help of a set schedule. Charlie Moore has been playing for both the club and the team throughout his four years at Redwood. As president of the club, he also takes on the role of captain of the team.

“We want [members] of the club to be able to throw the disc and play a full game. Some of the kids that are comfortable enough come together to form a team that plays in games,” Moore said.

The game is easy to set up, as the only necessities are a disc to toss around, cones to distinguish the boundaries and an open area to play on. Unlike most sports, ultimate frisbee does not require referees. Instead, players have the responsibility of following the spirit of sportsmanship, placing the responsibility of fair game on their hands. While highly competitive play is encouraged, it should avoid sacrificing the respect between opposing players, adherence to the rules of the game or basic satisfaction of playing.

When Finlay is not able to attend practices, Moore fills his coaching position, facilitating practice and leading the team through their routines. During a typical practice, the club warms-up, throws the disc around, plays frisbee games to practice technique and scrimmages.

“We only meet once a week, and it is not strictly regulated,” Tantum said. “Making ultimate [frisbee] a priority would enable everyone to come to more practices and get better at it. Becoming an MCAL sport would also give us better fields and more teams to play against.”

Becoming an MCAL sport would also enable ultimate frisbee to become more people’s priority sport. Moore hopes to see an increase in the sport’s popularity amongst Redwood students after the team joins a league.

“We are really just hoping to get as many people out [playing frisbee] and in the club.” Moore said. “Right now [the team] is fun and casual and you can make it what you want it to be. If the team were to join MCAL, more students would possibly prioritize the sport.”

The ultimate frisbee season spun into action on Oct. 8 but it is still looking for new members of any skill level to join the club, team or both. Club and team practices are held every Thursday from 3 to 4:30 p.m. throughout the year on the South Lawn.