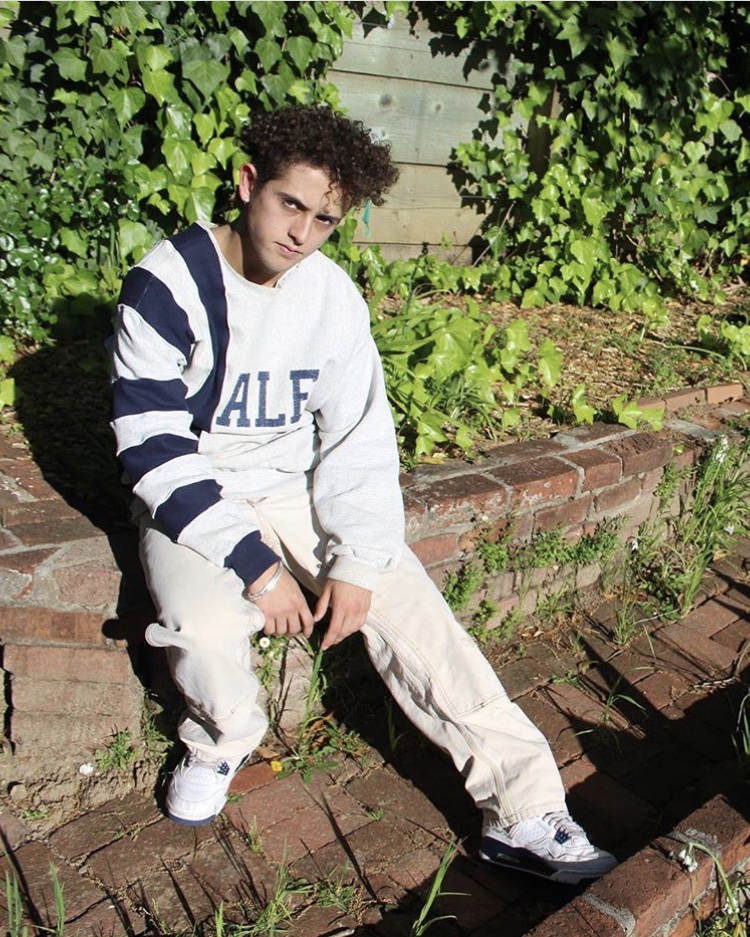 A warehouse door opens to an array of denim loosely laid out on tables. Factory machines produce white noise as people meticulously thread needles. People walking back and forth with bolts of fabric go about fulfilling their purpose for that day. In a single room, filled with motivated people fastidiously sewing, stands one teenager simply observing and learning.

Senior Cooper Sperling, currently enrolled in the Pathways program, satisfies his fascination for design with hours at a denim studio. However, a year earlier as he was just stepping into the fashion industry, he found himself doing something much different: finding inspiration.

“I would go to this Goodwill out in Burlingame, drive there at 7 a.m. and stay there until three. [I would] pay per pound and get a ton of clothes for 50 or 70 bucks. I would take all that stuff home and re-work it,” Sperling said.

Sperling has always been into the arts. Since a young age, he’s been dancing at Roco Dance’s Mill Valley studio and now teaches younger kids the skills he has learned. While dance will always be a major part of his life, Sperling says his interest and ideas regarding design became more prevalent in the last year..

“I’ve always been into fashion and started out with more retail things and learned about that side of the business through my family members. I naturally transitioned to the manufacturing side. I was curious, so I found a denim factory in the city and that’s how I got my start.”

From the factory called Holy Stitch, Sperling only gained more curiosity. He soon started apprenticing at the factory as often as three to four times a week and enjoyed the community that surrounded him there. After Sperling got more exposure to the manufacturing side of fashion, he soon began to trade and sell his own clothes. The factory marked a jumping off point for Sperling. It wasn’t long until he started to create something of his own.

“Now I’m starting to think of things in the long-term rather than just the clothes. I’m trying to expand it into different realms,” Sperling said.

Sperling is currently participating in Pathways, which is helping guide his work with design. Pathways allows him to participate in an internship with Julian Prince Dash, owner of Holy Stitch, who taught him how to sew. His internship focuses on design while he gets to choose classes that are more centralized towards what he wants to do in the future. In his junior year, Sperling completed Tamiscal Independent Studies which strongly relied on self motivation to complete work on his own time.

“The first few weeks [of Independent Studies] were intense because I was used to ducking into a class of 30 in a public school, not really doing any work and getting away with pretty good grades. [With Independent Studies], it’s very on you. You have to be your own motivator and that’s why I went. I wanted to kill some of my procrastination tendencies,” Sperling said.

For Sperling, Pathways is geared towards his interests and experiential learning. He values lessons that will help him realistically in life, rather than short-term knowledge that most people will forget soon after.

While Sperling stays engrossed with Pathways, he is not alone in this process of designing and releasing clothes. Lily Wyle, Sperling’s girlfriend, frequently helps him with his designs. They connected over an appreciation for the arts.

“I try to motivate him while giving him realistic advice on what people might buy and what would look better on a garment. I try to bring in my artistic eye to it,” Wyle said.

Not only does Wyle give Sperling a second opinion, but she also plays a major role in keeping Sperling focused and supporting him with challenges he faces in the process.

“I’m always there to help him through [the process]. Helping him through all the stress is important, because it is a stressful industry––especially starting out trying to build yourself a name. That can be difficult, so trying to make his life as easy as possible and offering my help where it is needed can relieve some of that stress,” Wyle said.

Wyle isn’t Sperling’s only supporter. One of Sperling’s best friends since birth, Delaney Anderson, has also encouraged Sperling’s work and has high hopes for his future.

“He has a kind of spontaneous side to him and he’s super creative and really talented, so that definitely supports what he’s doing,” Anderson said.

The name of Sperling’s clothing line is currently called Still Working, which is what he described as a representation of everything he is working on and what he wants to do with design. However, Sperling is sensitive to the idea of branding his clothes.

“I kind of try to stay away from any type of branding. I’m enjoying creating these pieces and I’m indulging in that instead of having to conceptualize a whole thing. I don’t even know my true identity yet,” Sperling said.

With this mindset, Sperling has received both respect and encouragement from many of those around him.

“His family supports him all the way and I know everyone loves his work, and they have been really supportive of his clothes. I think right now he’s super happy with his work and I’m excited for him,” Anderson said.

People like Wyle and Anderson continue to encourage Sperling and his work. While positive feedback helps self esteem, Sperling also appreciates those who don’t necessarily show interest in his designs but respect him for what he’s doing.

“One person was like, ‘Hey, I don’t really like your clothes but I think what you’re doing is really cool and I respect that.’ I respect that,” Sperling said.

While Sperling continues to expand his new clothing line, his recent focus on fashion has made him realize his purpose in creating pieces and has helped him mature as a person.

“I personally exert myself so hard that I want to lead by example…I’m trying to lead with a lack of branding and say you don’t have to take everything so serious. I feel like I get hung up on things and think they are bigger than they are but in reality they aren’t that important.”

Sperling continues to grow. Whether it be with his clothes or perspective on himself and others, he uses each design, collection and creation to learn something new every day.