This year the Redwood Bark surveyed students about their sexual experiences, teens under the influence, teens in love and issues all in between. Some of the findings from this year’s survey as compared to that of 2014 include a 6 percent increase in bisexuality and the national average of high school students having sex being 10 percent higher than the number of Redwood students having sex. The last time the Bark conducted the sex survey was in 2014 and the first time was in 1974. To learn about how students then and now are living their teenage years, continue reading.

According to data from Bark surveys over the past five years, not much has changed when it comes to Redwood students’ sexuality in that time. Nationwide, 98 percent of males and females identify as straight. In a survey done by the National Health Interview in 2015, 97.6 percent of individuals surveyed reported they are heterosexual, 1.6 percent reported they are gay/lesbian and 0.8 percent reported they are bisexual. Proportionally, this aligns very closely with the data collected through the Bark survey. Heterosexuality is far more widespread campus and country wide than homosexuality and bisexuality combined. In the Bark’s data, the most noticeable difference between the survey done five years ago and this year is the self-reporting of bisexuality, with an increase of six percent between 2014 and 2019. These two comparisons could potentially represent either the climate at Redwood and students’ willingness to share their sexuality, or the attitude in Marin and the demographic of its population.

The level of sexual experience hasn’t changed much in the last five years. However, in the first-ever Bark sex survey from 1974, the question “Have you had sexual intercourse since entering high school?” was asked and 60 percent of students self-reported they never had sexual intercourse since entering high school and 10 percent reported they were having sex regularly. Similarly, in the 2014 survey the question “About how regularly do you have intercourse?” was asked, resulting in 69 percent saying never and nine percent saying more than once a week. According to data from the Center for Disease Control and Prevention (CDC) collected in 2017, 40 percent of U.S. high school students have had sexual intercourse. This is about 10 percent lower than the data the Bark collected of students whose extent of sexual experience was intercourse 32 and 29 percent in 2019 and 2014 percent, respectively. 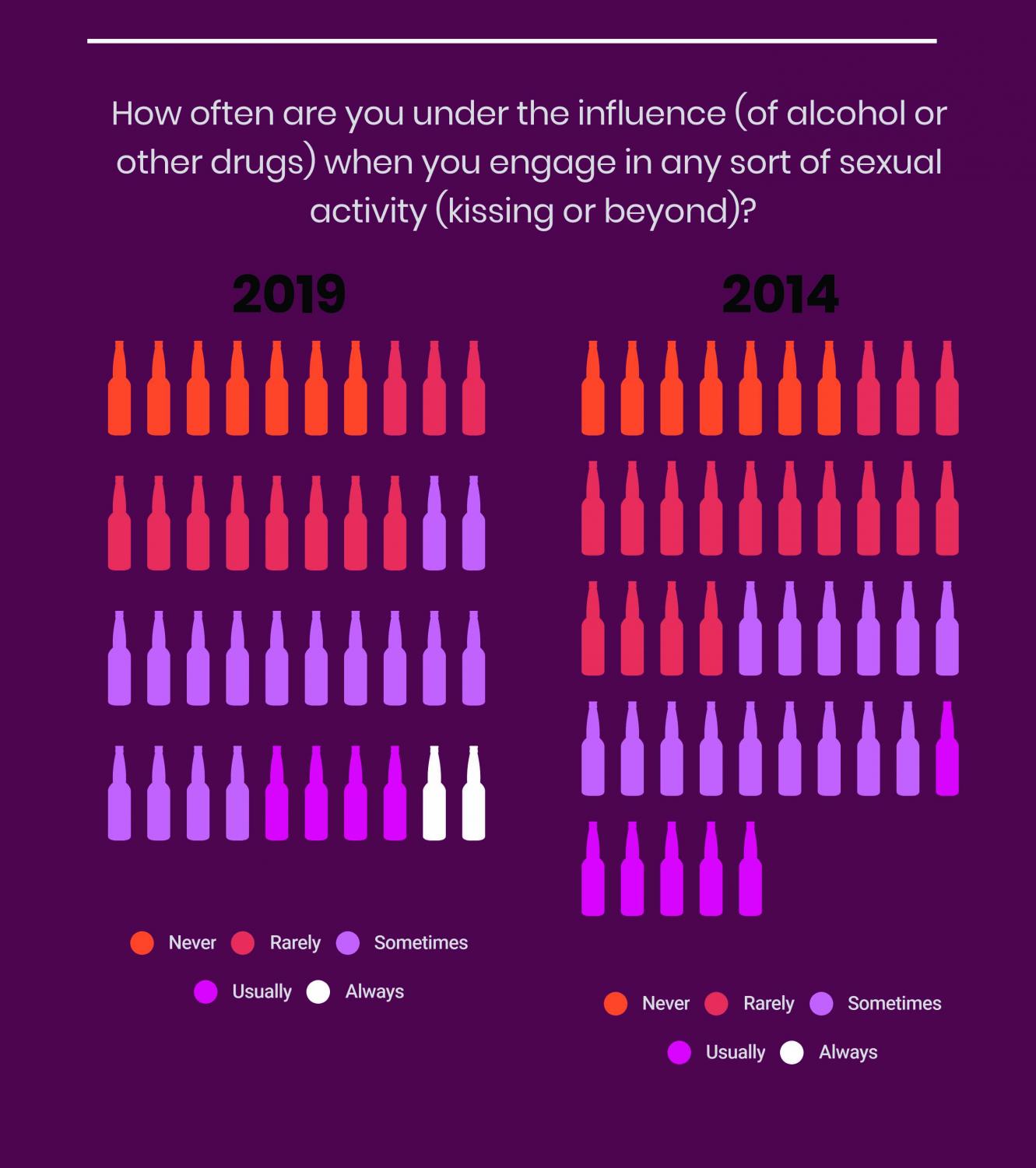 According to the CDC, 19 percent of students who are sexually active drank alcohol or did drugs before they last had sex. The Bark survey found that in 2014 more people were “always” under the influence of alcohol or other drugs than in this year’s survey. Whether the answer “rarely,” “sometimes,” “usually,” or “always” were selected, 37 percent of students have at least once engaged in sexual intercourse while not sober. Similarly, according to The National Convention on Addiction and Substance Abuse, of sexually active 15-24 year olds, 29 percent said they have done more sexually than they would have had they not been under the influence.

There is a substantial difference between the number of people who self-reported they believe homosexualty is morally wrong or an illness. In 1974, over a quarter of the school thought that homosexuality was an illness––forty five years later, that number has significantly decreased by over 30 percent. One year before, in 2013, California legalized gay marriage. Six years later, the percentage of students who believe homosexuality is morally wrong increased by five percent from 2014. Even fewer students in 2014 reported that they thought it was an illness, at three percent. According to a survey conducted by General Social Survey in 1988 and 2010, 62 percent and 88 percent of people approved of same-sex marriage respectively. 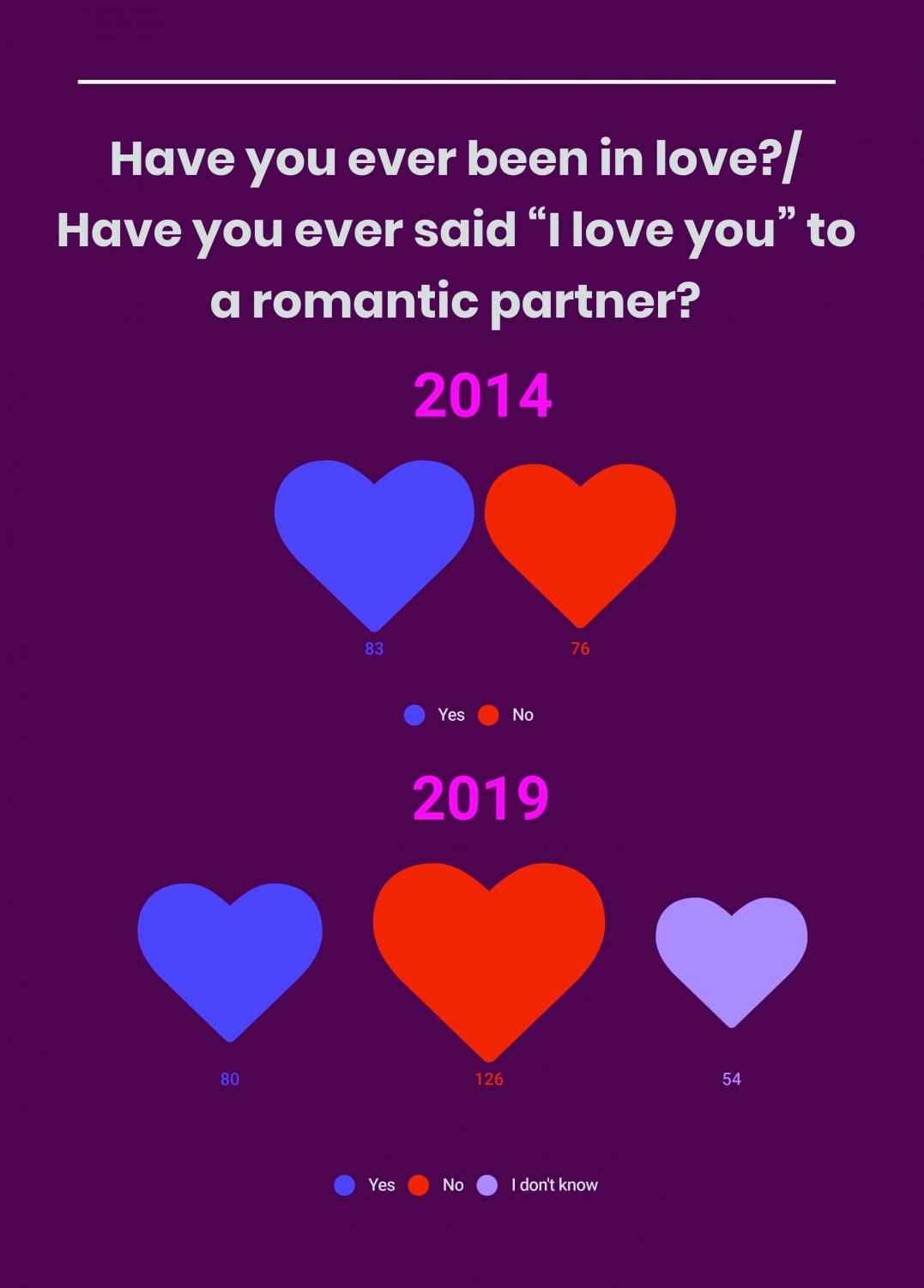 Five years ago, over 20 percent more students self-reported that they had said “I love you” to a romantic partner. In 2019, when students were asked if they had ever been in love, only 31 percent said yes compared to the 52 percent in 2014. According to a survey done by the Kaiser Family Foundation, 28 percent of 15- and 16-year-old students report that they are having sexual intercourse while 63 percent of those same students report that they are in love with their significant other. At Redwood, as the number of people having intercourse increased, the number of people saying “I love you” to a romantic partner decreased significantly.