Think before you speak: a misguided word 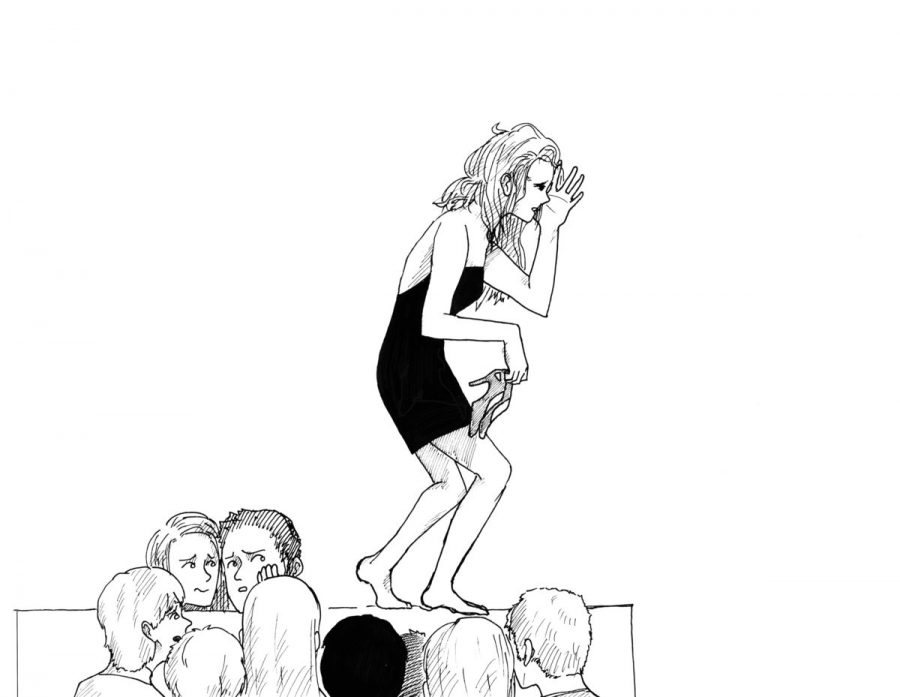 When Taylor Swift released her song “Better than Revenge” in 2010 with the lyrics, “She’s not a saint…she’s better known for the things that she does on the mattress,” my initial reaction was, “Really?” Did the music industry’s “good girl” actually croon such petty words towards her ex-boyfriend’s new girl, for simply being good in the sack? I was ready for T-Swift to pack up her bejeweled microphone and leave the music business for such blatant slut-shaming.

But she is not the only one.

According to a Jan. 2014 Bark survey, 28 percent of Redwood students admit “slut-shaming” someone, making them feel guilty or inferior for their perceived sexual behavior and desires.

Such attacks can be public, like those by Ms. Swift, but more often, they come in the form of sly glances and murmurs that circulate the halls of high school, parties, and social media.

I used to slut-shame, making snap-judgments based on their appearance and hearsay transmitted to me like a game of Telephone. At my all-girls, private middle school, we were told not to judge others based on their appearance, but I found ways of judging one’s promiscuity despite us all wearing identical uniforms. Three inches of leg below a pleated skirt, an unbuttoned sailor suit blouse, hoop earrings, oh my! My judgment has certainly lessened at Redwood, but a quick text from a friend about that girl who “was such a slut yesterday”, quickly tempts further gossip.

In the end, slut-shaming results in tears, ruined friendships, and potentially violence, for all those involved. And I’m over that.

People are not defined by their sexual behavior or the way they dress. Sleeping around with several people or slipping into a body-con dress does not constitute giving consent for harassment, bullying or sex. Nevertheless, women who do highly sexual actions are still perceived as lesser individuals to those with less sexual experience.

In other words, promiscuous girl equals bad person. Sorry, Nelly Furtado, but your harmless flirting on the dance floor makes you emotionally unstable. Guys—keep up the good work.

Thus the term “slut” promotes the double standard of how our society compares the sexual behavior of men and women. Rarely do you hear the term “slut” as a derogatory word for men, whom have no gender specific word of a similar meaning except maybe the term “player”, but even that doesn’t evoke the defamatory bite of the former term. Instead, young men are pressured to live the life of a bed-hopper by their male peers, and stereotypically relish in the notion of a woman exploring her sexual prowess with, well, hopefully them.

What even constitutes “slut”?  Back in the 1920’s, as skirt hems rose and makeup was worn, flappers were denounced for their rebelliousness and sexuality. They were called “sluts”, yet now we call them cultural trailblazers for today’s modern women. Thus, to be a “slut” is to just be viewed as such in the eyes of the observer.

Because this is a matter of perception, it is impossible to never be misperceived as someone you are not. Some girls cannot help but look sexually attractive, even when they don’t necessarily mean to look or act provocatively. Case in point: as a short, skinny, Asian girl who is naturally shaped like a pencil, I look like nothing more than a tween going out to a Justin Bieber concert when attempting an ill-fitted degree of sexiness in a tank top and skirt. But a girl a bit more curves? She is instantly va-va voom regardless of her outfit, and therefore is somehow entitled to more scrutiny.

By acknowledging that you can wear something that makes you confident, or freely explore your sexuality, and be respected as a person, is pretty empowering.

As a retired slut-shamer, I henceforth vow to never say or conjure up the word “slut” in my head again. The modern feminist in me says that’s enough. I ask you to do the same, because it’s none of our business what another girl does.