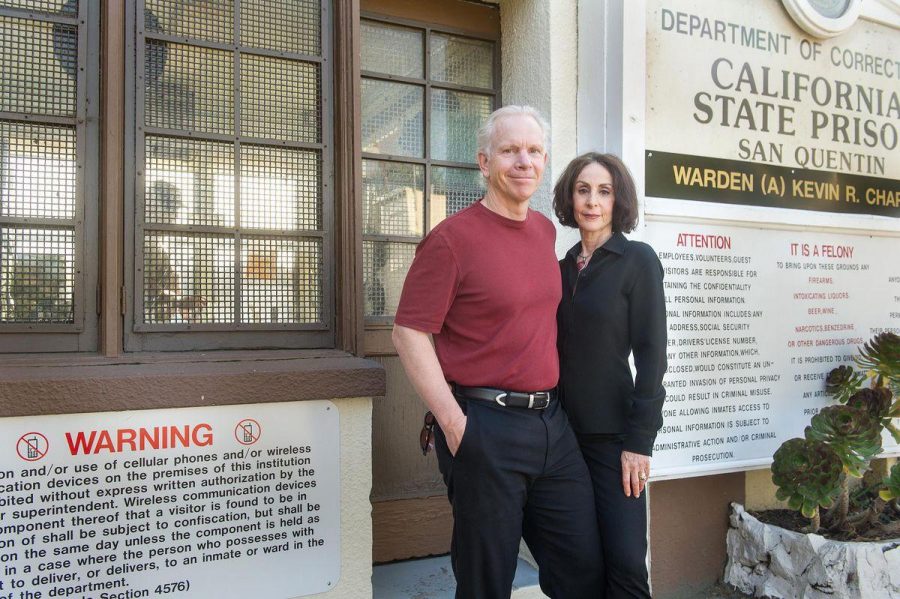 Behind the walls of California’s oldest prison, over 4,000 prisoners are waiting in captivity. Some, having committed dangerous and violent crimes, will never be released, may spend the rest of their lives behind bars. Others, with more minor infractions on their record, anxiously await their release into society.

After a prisoner is released, from San Quentin their incarceration becomes a permanent mark on their record. Stereotypically, released prisoners end up with a minimum wage paying job if they’re lucky. Today however, thanks to the efforts of one local non-profit, a few prisoners returning to society will have the opportunity to interview for jobs at startup technology companies, and may even go on to become well- paid entrepreneurs.

With headquarters located in San Francisco and a satellite office in Marin County, the Last Mile Program aims “to help bridge the gap between incarceration and freedom” for some of the many prisoners who are awaiting release from San Quentin.

An inmate who participates in The Last Mile program attends classes held every Tuesday and Thursday night. Over a six-month period, the men are trained about how to pitch their own business ideas. Once they have a business plan fully developed, the inmate eventually presents it to an audience.

Originally launched in 2011 by business entrepreneurs Chris Redlitz and his wife Beverly Parenti, the Last Mile program is currently in its third year.

Volunteers, guest speakers, and instructors from Marin, San Francisco, as well people from all over the country come in to help out with the class.

“Many times authors will come in and talk to the group about their book and ask questions and have an interaction with the men,” Parenti said. “We also have venture capitalists who come in, CEOs of start-up companies, and just people from the business community who come and speak with them, so they learn through all of this reading and interaction about what we’re trying to teach.”

The inmates also have to watch multiple videos, read books, and do their assigned homework every night.

“They are actually active participants in social media,” Parenti continued. “We even have a twitter feed called @tlm where the men are able to tweet and blog.”

This allows inmates to communicate to the public and answer questions regarding their business ideas. However since prisoners are prohibited from any kind of communicative activity, they have to write everything up separately and volunteers then post their comments to social media.

“This process can be very challenging,” Parenti said. “Some of the men in the program were incarcerated before the internet. They have never been online, because you’re never allowed to have phones or internet activity in San Quentin. We have to teach them all about that through discussions, conversations, and guest speakers.”

In the third part of the program the inmates come up with a business plan— something they’re passionate about—using the same business model taught at the University of Michigan Business School.

Next the inmates have to pitch their idea. After they come up with a five-minute pitch, they present at Demo Day–a day at San Quentin for the men in The Last Mile program to display their business ideas in front of invited guests.

“We have about 100+ invited guests, including venture capitalists and people from the business community, as well as other San Quentin inmates,” Parenti said.

Before The Last Mile program became a part of San Quentin, Redlitz and Parenti were running a program they called KickLabs.

“We helped young entrepreneurs realize their dreams and build out their businesses to help them grow in the real world,” Parenti said.

The couple became involved with the prison after Redlitz was invited to give a speech to 40 inmates about business entrepreneurship and his work at KickLabs. Redlitz found the prisoners to be surprisingly intrigued about what he had to say.

“When he finished his talk, their hands went into the air and there were so many questions,” Parenti said. “They were so inquisitive that he was pretty much blown away.”

Parenti said she was initially apprehensive to integrate their business accelerator program into San Quentin.

“I have to say at first I thought, ‘Oh wow here’s another one of Chris’s crazy ideas’,” Parenti said. “Why would I spend any time I had left over in prison …which we all view in society, as the people who are there as the dregs of society?”

However, after some convincing from her husband, Parenti agreed to look into the idea of working with the inmates at San Quentin. She said she soon became enthusiastic about Redlitz’s plan’s for KickLabs.

“When I started finding out more about issues facing the prison system today, which never really pertained to me or fazed me in any way before, I was pretty amazed,” Parenti said.

“They don’t have the tools for success,” Parenti said. “So many people are unemployed. Then you have people unemployed who have been ex-felons.”

After researching their business idea Parenti realized a program like KickLabs would be very useful in a prison like San Quentin. “It cost about $50,000 a year per prisoner in San Quentin–these prisoners are long term prisoners and most of them serve a fairly significant amount of time, so if you multiply all those years by $50,000 you’re making quite a large investment in a person.”

Another motivator of Parenti’s is that in California the average rate of recidivism– the return to prison once one is released–is over 60%.

“I thought if we don’t empower them to have confidence and become people with skills that are relevant in today’s society, there is zero chance that they’re going to be successful,” Parenti said. “They’re going to go back to their old neighborhoods and do the thing they know how to do.”

One of Parenti’s proudest moments when teaching the inmates in The Last Mile program was during the first Demo Day.

“Without us reaching out we had the first lady of California, Anne Brown, and the former secretary of CDCR (California Department of Corrections and Rehabilitation) in the front row at our Demo Day, as well as a videographer from the Wall Street Journal and numerous press people. I feel very proud.”

The Last Mile also provides its graduates the opportunity to interview for a paid internship at a technology company. “We keep a venture fund Transmedia Capital where we invest in start up companies, so we can ask businesses if they would consider hiring our graduates for paid internships, as they’re released,” Parenti said.

One of the graduates from the program had a job offer before he was released because of a company that came to one of the program’s demo days and happened to take a liking to the inmate’s business idea. This man was released on July 3 and started his internship on July 17, two weeks after he was released. He now has a full time job with the company.

“Those type of moments that you can provide that type of experience to someone, and connect people in that manner is very, very rewarding,” Parenti said.

Although The Last Mile program may allow some inmates a life-changing opportunity, it cannot help all of San Quentin’s prisoners awaiting their release.

In order to be part of the program an inmate has to complete some courses before hand. Many of the men have already either graduated from or are participating in the Associates Degree Program, which is available at San Quentin through Patten University. This way the participants can get a degree, equivalent to a two-year college.

“They must obviously be evolved as a person and not be in denial about what they’ve done,” Parenti said. “You have to really evolve emotionally and want to give back to society and want to write your own business plan.”

The Last Mile Program has very stringent requirements in accepting its applicants. According to Parenti, only 15 men were accepted into the program out of the hundreds of applicants.

“The hardest thing for me is when I’m interviewing someone to be part of the program and I have to say ‘no,’ because I realize what an impact this could have on their life. To say ‘no’ to them, I know what they’re missing out on, and that’s hard. You can’t give everything to everybody.”
Inmates learn responsibility through companionship

Confined within the San Quentin prison’s barbed-wire protective metal fences, are not only violent criminals, but also level one prisoners.

One a scale of one to death row, these level one inmates are considered more advantaged as they maintain benefits other prisoners do not. Usually either nominated into or assigned to the firehouse program, these level one prisoners are privileged to live in the firehouse instead of in cells, making their sentence mostly independent for their situation.

While these fifteen level-one firemen do not live on the prison grounds, but live within the wall of the prison, the firemen serve just as firefighters do in outside communities.

Though on duty for a 24-hour basis, not all the firemen live alone. About three to four firefighter inmates at a time are given the opportunity to live with shy or medical foster dogs from the Marin Humane Society who live in their firehouse rooms as well.

“The dogs are there anywhere between two weeks to about six months,” Larry Carson, founder and coordinator of the Pen Pals program said, “Sixty percent of them are medical or surgery fosters sent to San Quentin to recuperate, twenty percent are shy dogs who aren’t good adoption candidates yet and who get one on one time there to come out of their shell and blossom, then the other twenty percent come in as puppies.”

For about ten years now, Marin Society’s Pen Pals program, at San Quentin, has not only given disadvantaged dogs the opportunity to be trained, but has also brought the lessons of patience and higher self-esteem to inmates within the prison.

“If you’re in prison, one, to get to the firehouse is a really good thing. They cook their own meals, they have a lot more free time, they’re not in cells, but to have a dog to relate to when things are not going well, well, you can always communicate with your dog,” Carson said.

Carson began the Pen Pals program of San Quentin after a show on Animal Planet sparked his interest in the relationship between animals and inmates.

Acting upon his idea right away, Carson decided to visit a Nevada State Prison with a similar type of animal connection program.

“The man I worked with at [Nevada State] prison said [the animal program] cut violence by about 30% in the prison and has just changed the whole mood of the prison by having the dogs here [at the Nevada State Prison],” Carson said about his visit.

“[The program] really builds a certain self-esteem. A lot of these guys have never had anything to really be responsible for and take care of, but now they have a dog and they really take that very seriously,” Carson said.

“They get a dog that comes in and they can relate to that dog because that dog is a shelter dog, somebody’s given them up, nobody really cares about them,” Carson said. “[The inmates] come into the program and say, you know, I can really do something for this dog, I can train this dog, I can make this dog healthy. Then it goes back to a loving home, so that really helps with self-esteem in the inmates.”

According to Carson, since the initial insertion of Pen Pals, about 46 inmates (keeping in mind that the inmates rotate based on length of sentence) and about 250 dogs have been through the program, of which 20 of those dogs have been adopted by prison staff.

“The thing about these inmates is that these guys are all going to get out eventually, so it is our wish, it’s our target, to make them as good of people as we possibly can,” Carson said.