The Truth of Wall Street 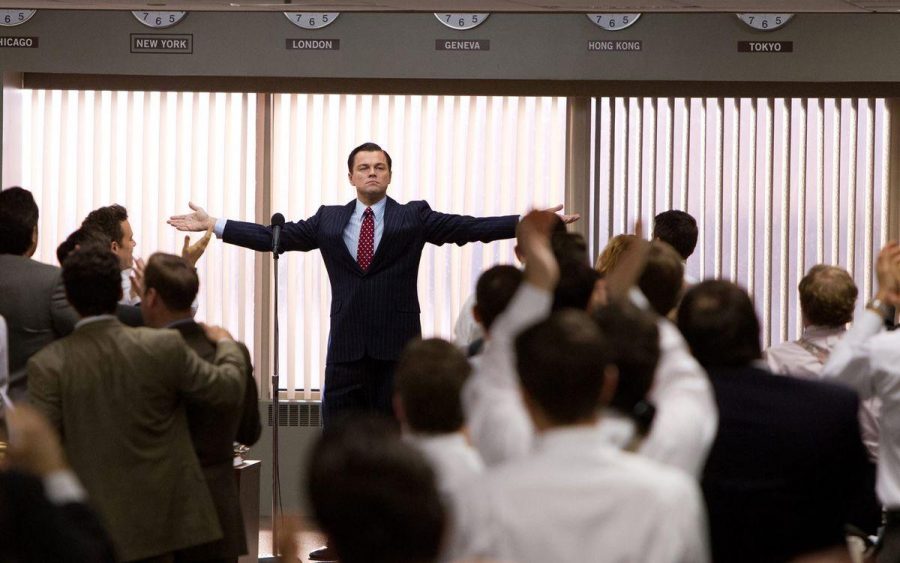 The Wolf of Wall Street sets the tone right from the get go — during the film’s opening scene, little people are being thrown across the screen in a cocaine and alcohol fueled office party.

The film continues in the same fashion for the nearly three hour run time, with countless shots involving exposed breasts, pills, and f-bombs (522 to be exact), giving a new meaning to the R rated genre.

While some may argue the extravagance and vulgarity of the film is over the top, I found it necessary in depicting a reality often left out of sight and out of mind.

The Wolf of Wall Street is a true story about American greed, told by a man who lost sight of his moral compass, blinded by women, drugs, and cold hard cash.

The film begins with a man named Jordan Belfort (Leonardo Dicaprio), who in the 1990s discovered a new way to scam investors out of millions by manipulating stocks and misleading investors.

“My name is Jordan Belfort. The year I turned 26, I made 49 million dollars, which really pissed me off because it was three shy of a million a week,” Belfort said to the audience early in the movie.

While the film spends lots of time covering Belfort’s professional exploits, the biggest emphasis is on his love of… extracurricular activities.  Belfort’s business partner and best friend Donnie Azoff (Jonah Hill) spend the majority of the film high on cocaine and Quaaludes (popular drug at the time), the ingestion of which are illustrated frequently throughout the film.  Belfort and his band of rowdy stockbrokers also have an affinity for prostitutes, which is discussed and shown several times.  If drugs, sex, and immoral behavior are off-putting to you, this may not be the film for you.

That being said, this crude behavior served more of a purpose in the film than eliciting cheap laughs — it helped illustrate the “work hard, play harder” mantra that dominated Wall Street for decades.  And while Martin Scorsese, the director, is known for his dramatic films, The Wolf of Wall Street is nearly 100 percent faithful to Belfort’s similarly titled autobiography.

While the most memorable parts of the film are centered around obscene visuals and risqué content, there is in fact a plot line.  The film follows Belfort’s ascension from rags to riches (SPOILER ALERT) and soon back again following the criminal investigation led by Patrick Denham (Kyle Chandler).  I was rarely hanging on the edge of my seat to see what would happen next though, as I was either laughing or cringing at Belfort’s latest adventure.

Overall, I would consider the film well worth the time to see, and one that will have audiences and critics talking all throughout the award season.  Two weeks after seeing the film, I can still vividly remember entire scenes vividly, such as Belfort doing lines of cocaine to shake off a Quaalude high in order to save his best friend, or Belfort throwing one hundred dollar bills at an FBI investigator and calling them “fun coupons.”

Additionally, the film made me contemplate the ethics and behavior of the Wall Street culture.  It is especially thought provoking because finance is an industry which many Redwood parents are affiliated with in some capacity, some of which even worked in New York during that era.

The Wolf of Wall Street is rated R, 179 minutes long, and well worth the cost of admission.