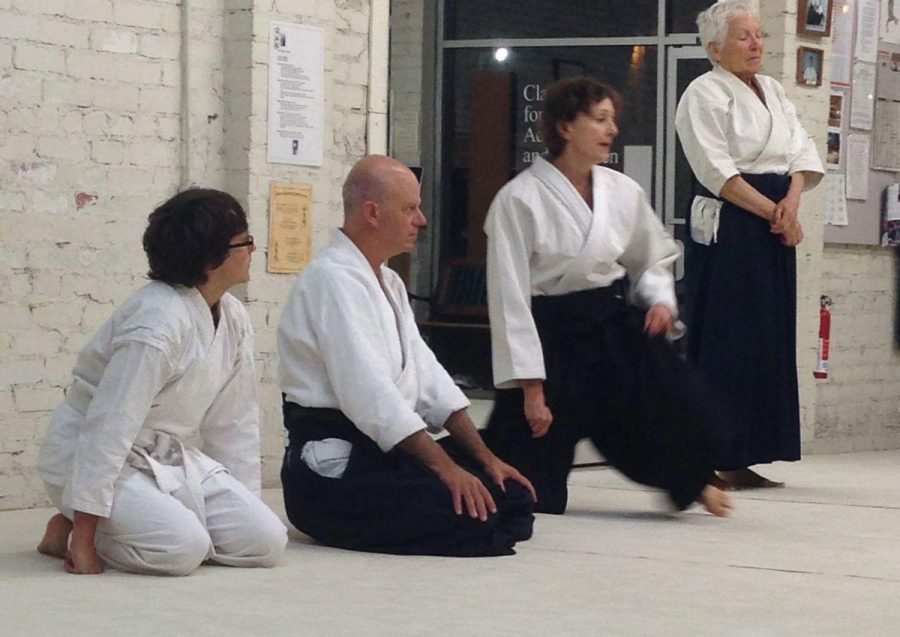 Despite the wide variety of sports available at Redwood, some students prefer to participate in sports that are not affiliated with the school, or a team. Sports that are seasonal, contingent on animals, or from Asian roots have gained popularity amongst the student body. This series of stories focuses on three of these lesser-known alternatives. Each story conveys an insight into the worlds of horseback riding, skiing, and aikido.

Sophomore Jonah Goodman wields a sword as he crosses the white-clad aikido dojo during his weeknight class.

The sword Goodman wields is known as a bokken, used to enhance body movement in aikido.

“It seems like a real weapon, but it really isn’t a weapon. It’s really used to enhance our body movement,” said Hans Goto, Chief Instructor at Bay Marin Aikido.

The enhancement of body movement is an essential part of aikido, a martial art based purely in self defense.

“The majority of our techniques are based on the flow of your body in relation to your opponent, where if they come at you with some sort of a grab, a chokehold, a punch, or a weapon, we can use their own energy and their momentum, draw it into ourselves, and then deflect them based on that energy,” said senior Behnaz Hekmat, Goto’s student for five years.

“It’s really about self-development, making yourself a better person, and reaching out into the community,” Goto said.

Aikido consists of two primary components: practice with the bokken and taijuitsu.

Taijutsu is an umbrella term for any skill or technique in martial arts that involves the unarmed body. The taijutsu utilized in aikido focuses specifically on throwing and locking the joints of targets.

“I personally like ikkyos, which is when you flex your opponent’s wrist in so that their fingers end up pointing toward their forearm,” Hekmat said. “They happen to be the simplest technique, but actually the most fun for me.”

As is the case with most martial arts, those who practice aikido can attain of different levels of belts.

Both Hekmat and Goodman are the lowest rank in aikido, known as a sixth kyu.

“It goes sixth kyu, fifth kyu, fourth kyu, third kyu, second kyu, and the first kyu is your black belt also known as a dan. Once you get your black belt, it takes a year to get your first dan, two years to get second dan, and so on. The highest level of dan current belongs to the son of the founder of aikido, Osensei, a ninth dan,” Goodman said.

“It’s very structured, and very spiritual in a way. There’s no competition, and [different belt levels] all do the classes at the same time,” Goodman said.

Goodman’s decision to switch martial arts also came in part from the influence of his peers.

“I had got a lot of people telling me to try out aikido, especially my math teacher Ernesto Diaz because he does aikido. He told me that if I did tae kwon doe and I’m such a high rank, and if I wanted to branch out and learn some more martial arts, then why don’t I come to aikido,” Goodman said.

Aikido is defined by its emphasis on movement, as opposed to pure technique.

“In aikido, there’s a certain grace and style, and our goal is that everything moves cleanly, beautifully, simply, and has a certain elegance,” Goto said.