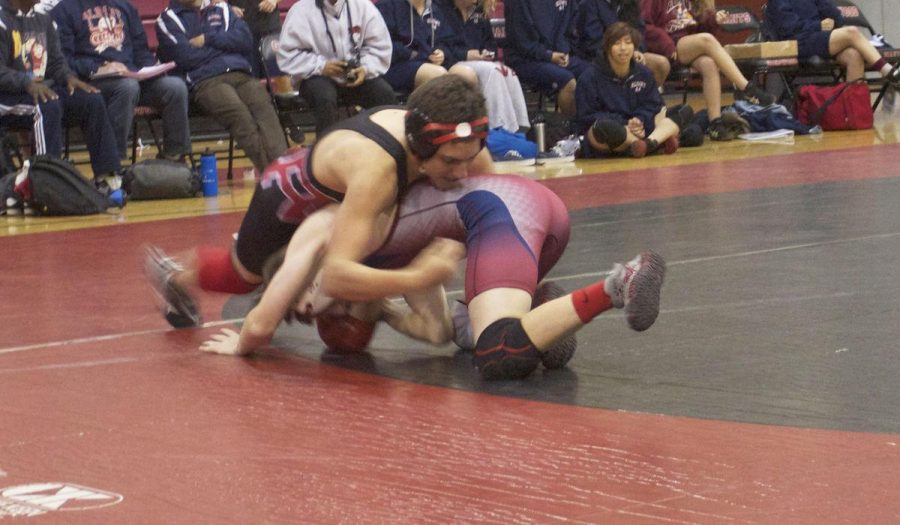 It may come as a surprise that, in a sport where winning means dominating the opponent physically, the warm-up routine consists of gymnastics and cartwheels. After rolling out the mats and stepping into their wrestling shoes, twenty boys and one girl, ranging in size from about 100 pounds to about 200, jogs, stretches, and begins the carefully choreographed session of acrobatics: cartwheels, handsprings, hand-stand walks, forward rolls.

“It’s to get us used to our own body,” senior Kenneth Berreman said.

When the team enters a meet, each wrestler will be alone in the battle against the opponent, with teammates absent save for their encouraging voices. But as practice turns from warmups to more specific skill work and the wrestlers break into pairs to learn and perfect moves, it is clear that wrestling is a team sport.

“A better partner is the only way the team gets better, so it’s not really an individual sport,” said junior Brian Finci.

“In other individual sports, like swimming, your practice doesn’t impact the other people,” Berreman said. “But in wrestling, you need a good partner. The entire team needs to be good for the individuals to get better and do well.”

In wrestling, just as in cross country, track, and swimming, players compete individually but gain points for the team.

“We’re going for the MCAL title, but it’s really out of my control,” Finci said. “We can only win if the whole team does well.”

On top of the team-oriented scoring system, which accounts for matchups in each of 14 different weight classes, wrestling adds a physical closeness that cannot be matched in other sports, further enhancing the bond necessary between teammates.

Winning also takes a balance of strength, conditioning, endurance, and maybe most importantly, weight. On the mornings of tournament competition, wrestlers must weigh in with officials to make sure they are within the boundaries for their weight class. Wrestlers then compete in five matches a day, with just 45 minutes between each, a strenuous test for a body that has been taxed to make weight.

“It’s crazy physically, but [the tournaments] are definitely worth it,” Finci said.

Berreman said he has adjusted his diet slightly to aid in maintaining a consistent weight and still having enough energy to compete. He said he does not do too much to shed weight right before a tournament.

“I run before tournaments just to let out a little, but that’s pretty much it,” Berreman said. “All those stories about people running with trash bags [to lose weight], I don’t even know what that is, that’s not how we do it on the team.”

This season the team has worked on bringing new teammates up to speed. This has meant a reduction in advanced drills and more basic training.