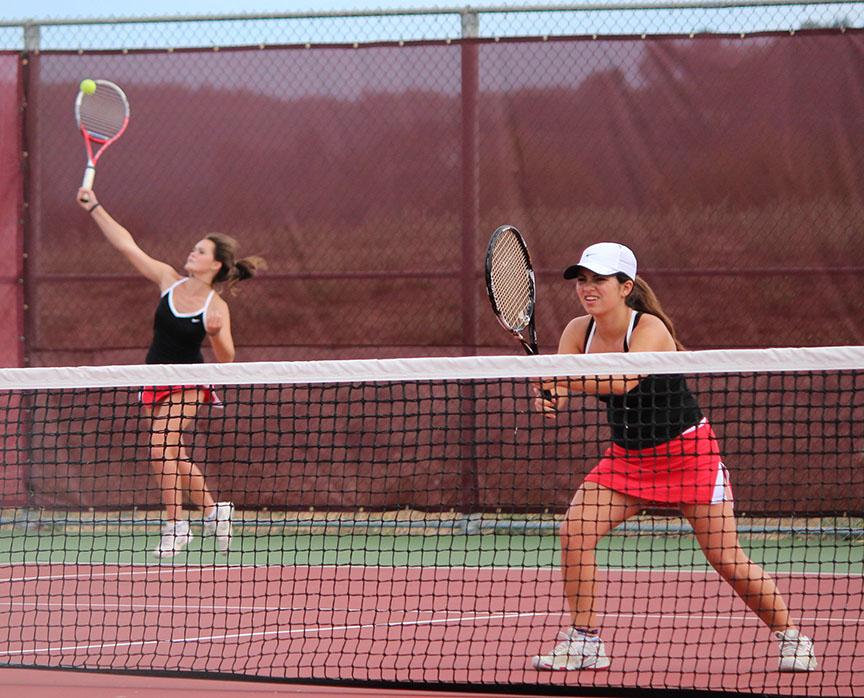 With dramatic changes to the lineup this year, the girls’ tennis team must deal with a league in which Branson has emerged as a new power.

Redwood and Tam have consistently dominated MCAL, but this year Branson has already defeated both teams. According to captain Sophia Hooper, senior, Branson is the team to beat.

Sophomore Keiko Kamei said she thought Redwood was just as good as Branson.

“I think we’re pretty even with Branson,” Kamei said. “We just were kind of unfortunate in that match.”

Redwood has made significant changes to their lineup this year, as players like Hooper, Kamei, and sophomore Paige Silverman have all moved up the ladder significantly.

As a freshman, Hooper played number one singles. However, as standout young players like Ayla Aksu, Hadley Berg, and Daphne de Chattelus joined the team two years ago, Hooper was relegated to lower positions on the ladder.

With Aksu, Berg, and de Chattelus all practicing on their own and playing tournaments rather than playing for Redwood, Hooper is once again playing number one singles.

“I’ve worked really hard in my tennis, so it’s a really nice thing as my reward after four years,” Hooper said. “I think, being a captain of the team and playing one singles, I am kind of a leader for the girls, which is something that is really special.”

Hooper said she hasn’t felt a huge increase in stress as a result of moving up on the ladder.

“It’s a little bit more pressure, obviously, but I think the team is very united,” Hooper said. “They don’t make it a pressure point for the top singles player or top doubles players when it’s really a whole team effort.”

Because one player can only effect one of nine matchups, no player can win a match singlehandedly.

“Everyone who is playing in a match is really important, just as important as anyone at the top,” Hooper said.

According to Hooper, sophomore Keiko Kamei has also moved up on the ladder a lot after playing number five singles last year. Kamei said that against tough teams, she plays number two singles to help deepen the lineup, but in other matches she sometimes plays number one doubles.

Hooper said. “I’ve played with her a bunch, and she’s been hitting really well, and she’s improved a lot, and I think she deserves her spot at two singles.”

Kamei said being moved up in the lineup created more responsibility to help deepen the lineup and to set an example of working hard and competing in intense matches.