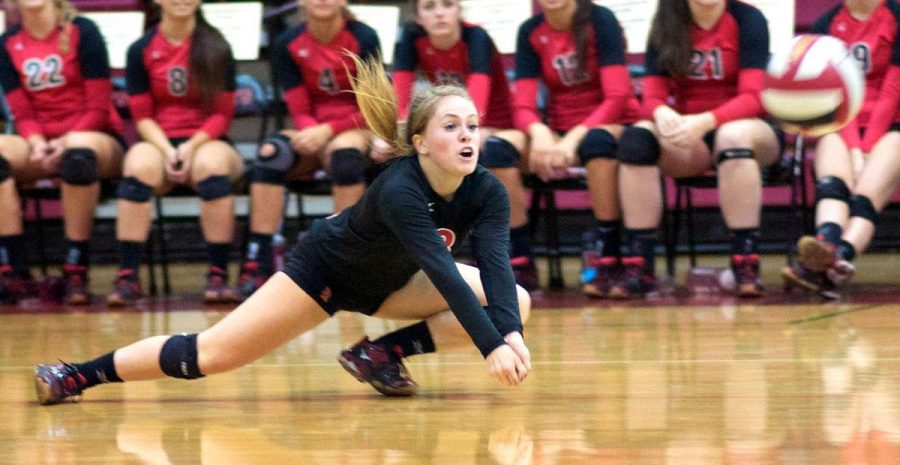 Rachael Thorson stands out. Amongst a team of tall girls in a tall girls’ sport, she is a diminutive defensive specialist. Her five-foot frame allows her to dive quickly to the floor and “dig” the ball when it is spiked by the other team, keeping the play alive for her taller teammates to send to the other side.

But it is also strangely fitting in a figurative sense. Thorson is perhaps the most colorful member of the team, a little bundle of energy who leads the Giants’ pre-game stomping routine.

A senior, Thorson is one of two co-captains. Coach Katie Pease often turns to her to help other players mentally get over poor play or a lack of playing time. On a 17-girl team in a sport where only six players play at a time, that is a significant role.

Thorson describes the team as close-knit, a happy family of 17 girls.

“I’ve been playing club volleyball with all these girls for so long that I’ve become really close with everyone,” Thorson said.

On the day of a match, the entire team eats lunch together.

Thorson is not the mother of this happy family, but rather a sort of enthusiastic older sister, a role model whose hard work and team spirit sets an example for the younger players.

After being called for a controversial penalty that ended Redwood’s dramatic five-set loss to Branson last week, she brooded over the defeat. For a few hours.

The next day there she was at practice, delivering the same positive vibes as ever, bounding around with her usual energy, focused on the team’s goal of an MCAL championship, which will likely require a playoff victory against Branson.

Her dedication and love of the sport have transformed her from a sophomore with sparse playing time into a senior whose skills play a significant role in the success of a league championship contender.

Perhaps more noticeably, her improvement has shifted the loudest voice on the team from the bench to the starting lineup. Even as a sophomore, one of the youngest and least experienced players on a team full of upperclassmen, she concocted and led cheers for her teammates.

Almost every player on the team has a cheer, except for the lead creator herself. Come on, girls. She deserves one.