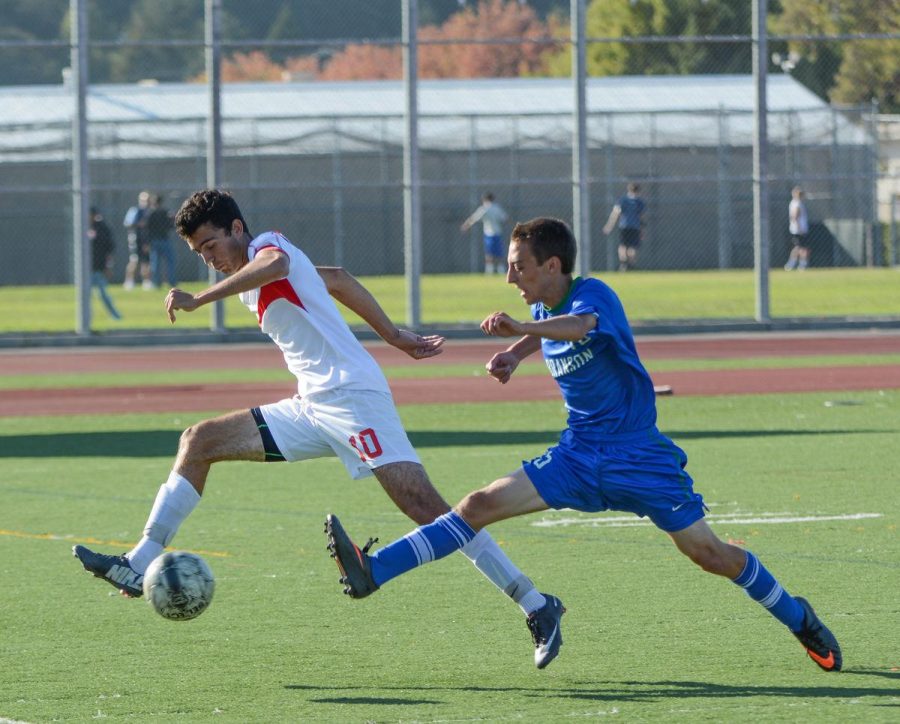 Senior Sasha Boussina breaks away from a Branson defender during Game Night.

The question has barely even pierced the air before Sasha Boussina responds.

“Give it to me,” he says, explaining the strategy if Redwood needs a goal.

A lanky, olive-skinned senior, Boussina is the most prolific goal scorer in all of MCAL. And he knows it.

He is quick to tell you that he has scored a goal in every game that Redwood has won. For a successful team, that is a lot of games and a lot of goals.

“He’s the one finisher,” Boussina’s fellow captain Lucas Wong said. “Every team needs someone like him.”

Boussina likes the spotlight, making his role on the team perfect for him. His attacking prowess has drawn the attention of opposing defenders and college recruiters alike.

“He without a doubt brings a ton of talent combined with athleticism that’s beyond what most high school athletes have,” said coach Gabe Zieff. “Whether he scores himself or he doesn’t, he creates scoring chances with his skill and his athleticism, which we’re very fortunate to have. He accepts that role and flourishes in it, he likes to be in that spot. Some of our best chances come when all of the attention comes to him, and he shares the ball. It gives his teammates a lot of opportunities to have success.”

Boussina has committed to play next year at USF.