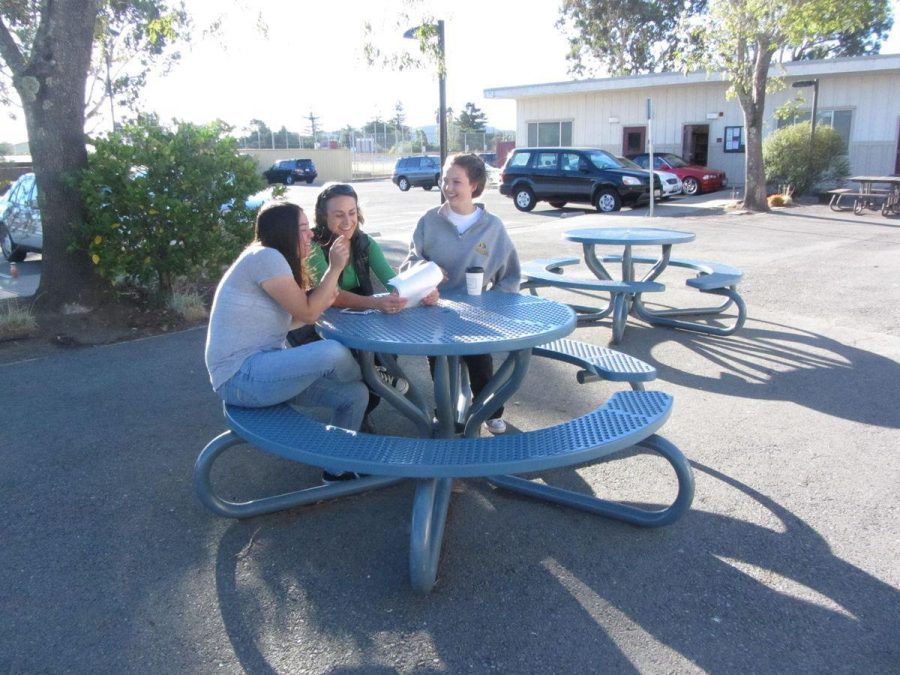 In order to satisfy its growing population of 1500 students, Redwood features a broad variety of courses. While it is easy for some to find their own niche in Redwood’s diverse possibilities, others prefer the anti-frenetic and intimate atmosphere of Tamiscal.

Although it’s located so close to Redwood, Tamiscal offers a different, more independent style of learning, sometimes including as short as an hour-long day of class time, allowing students more opportunity to get other priorities done, but only if they know how to manage their time well.

Redwood senior Eric Bryan, who is now looking into transferring back to Tamiscal after attending it’s Team program during his junior year, misses how much more free time he had at Tamiscal as he is now trying to adjust to Redwood’s routinely long schedule.

“The flexibility of the schedule is what I like about Tamiscal,” he said. “It uses up so much of my day just sitting in classes as well as the amount of work that I have to do out of class. A lot of my classes I understand pretty easily, so after two minutes of the teacher talking I am done and ready to leave.”

Seniors Mimi Ginzburg and Ember Mulcahy continued to attend Tamiscal after one year of participating in the Team program, and in a recent interview, the two described the small environment and less frantic atmosphere as beneficial to their learning.

“Redwood is a great school for people who thrive in big school settings and who can really go out of their way to talk to their teachers if they need help,” Ginzburg said. “After I did the Team program, I realized that I do better in a small setting school-wise and being able to have more one-on-one with a teacher helped me.”

Agreeing with Ginzburg, Mulcahy added, “We both went to private elementary and middle schools that were really small. I didn’t realize how much I missed it. Coming back to Redwood where there was so much structure and routine and I’m about to go off to college anyways would just be pointless.”

Like Ginzburg, Erkelens emphasized the importance of the student-teacher relationship which she feels Redwood lacks due to its large class sizes.

“It’s not for everybody being in really small classes. My biggest class has six students,” Erkelens said. “You have more of a personal connection with the teachers.”

Erklens has noticed a dramatic shift in her grades after transferring to Tamiscal. “At Redwood I was getting D’s in math every year and at Tamiscal now I’m getting straight A’s.” she said.

In the start of her senior year, Mulcahy attended one class at Redwood which she said was nice in that she enjoyed the teacher and being able to see her Redwood friends once in her day. However, after her peaceful year at Tamiscal, Mulcahy soon found Redwood to be too overwhelming and decided to drop the class.

Mulcahy said she thought she would enjoy passing people in the halls again and saying “hi”, but when she got back to Redwood, she was overwhelmed.

Aside from Tamiscal’s benefits of having more free time and a quiet atmosphere, Ginzburg and Erkelens both addressed the significant responsibility of time management required to excel in the school’s independent style of learning.

“For me I guess what it was I could get at Tamiscal is feeling like I was really accountable for my work,” said Ginzburg. “You really do have to show up and put all your effort towards everything they expect from you. You have to be more independent and procrastinate a lot less which is difficult sometimes, but you have to get it done.”

Erkelens said that Tamiscal’s homework schedule is unlike that of Redwood.

“They give you homework you do a little bit of it in class and if you don’t understand something they give you help. Once the hour is up you’re basically on your own,” Erkelens said.

Although these students feel Tamiscal is a better system for them, they all agreed that they miss certain aspects of Redwood that Tamiscal lacks. Students at Tamiscal are allowed to attend all Redwood events, but it’s a different experience when students cannot participate in the hype of such typical high school experiences.

Although Erkelens can still attend Redwood Spirit Events such as Homecoming, Back to School Dance, and rallies, she says it is not as exciting unless you are around the hectic energy prior to these school spirited occasions.

“I’ll take Tamiscal over Redwood any day, but I still do miss it because obviously you can’t have a rally at Tamiscal with 100 students,” said Erkelens.

Ginzburg said she misses the school spirit of Redwood as well as seeing her individual Redwood friends on a daily basis.

“I miss walking in the halls and saying hey to friends,” Ginzburg said.

Even the faculty at Tamiscal admit there are certain drawbacks to the smaller environment.

Tamiscal principal Corbett Elsen explained that although students acquire more one on one time with their teachers, which may or may not prepare them for college, their schedule forces students to work in a college-like setting.

“On one hand students will not have individual instruction in college, but if you look at the structure of their Tamiscal weekly schedule, it mostly closely resembles a college schedule with limited class time and the expectation that students will need to work independently to understand the material of the course.” Elsen said.