Athletes explore the road to recruitment 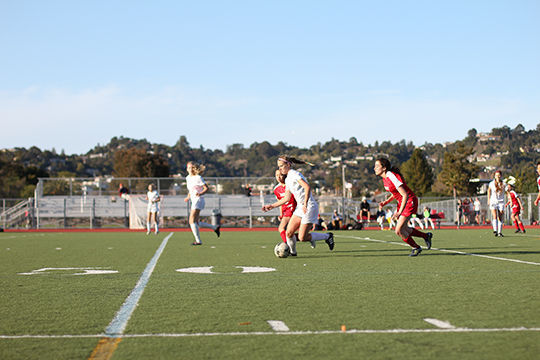 Senior Chace Schornstein committed to UCSB for soccer after a long decision process.

As the college application process begins, many student athletes hope to reach the goal they’ve been working towards—athletic recruitment.

The collegiate athletic recruiting process plays a significant role in the college decisions of many student athletes. Although each athlete has different considerations when selecting a college, there is a path that can lead to recruitment success.

Schornstein, who has committed to playing at UCSB next year, says contacting coaches early in the recruiting process is key.

Peisch, who went on to play for Fresno State University, said another one of the keys to getting recruited is convincing coaches to see you.

“You need to be your own advocate,” she said.

Schornstein started by emailing college coaches expressing her interest in playing for them. Schornstein said she keeps in contact with the coaches, and added that the connections that her Marin FC 1996 Girls Blue team club coach has with colleges gives her an advantage.

Both Peisch and Schornstein went to summer soccer camps and took part in U.S. Soccer’s Olympic Development Program to help with getting recruited. Schornstein said the benefit of these programs is to show coaches you can compete with high-quality players and to gain lots of playing experience. Peisch added that these programs helped her do an internal evaluation of her skills and pick a school where she could play and succeed at.

According to Peisch, the stakes of the recruiting process are high. She said that with so many good players, little details, such as mistakes on a questionnaire, can prevent schools from even looking at players. Furthermore, Schornstein says girls’ soccer players commit earlier than most other sports, so showing interest in playing in college early is key.

Focusing on schools that offer good education alongside sport is helpful in narrowing down athlete’s choices. Growing up in Fresno, Peisch knew by sophomore year that she wanted to play college soccer. She focused on finding a school that could offer her the education that she wanted. Once she decided on kinesiology as a major, Peisch was able to narrow her choices to three: Fresno State, UC Davis, and Long Beach State.

Schornstein decided she wanted to attend UC Santa Barbara in January of her junior year, after she began to email coaches her freshman year.

“It gave me a good balance between education and playing soccer, but is a place where you can still have a good time,” she said.

According to Schornstein, playing at UCSB is an attainable goal.

“The coaches were interested in me, and so I could actually get a chance to play,” she added.

As for Peisch, using her five paid recruiting trips well was difficult.

“You have to see where would be the best fit—for the education and the team,” she said. At UC Davis, for example, she realized the program had a different mindset than she did after watching a lackadaisical practice.

Now, as an athletic director, Peisch is ready to help student athletes. She tries to help if “people have specific questions or need help talking to a coach.”

Peisch also believes that the recruiting world, at least for women’s soccer, has changed greatly since she went through the process. With the advent of YouTube, she says that more and more international students can show themselves off to coaches in America, making the competition for recruitment even more intense.

As for the college experience, Peisch described it as “a daily, 100-percent job you need to do on your own.”