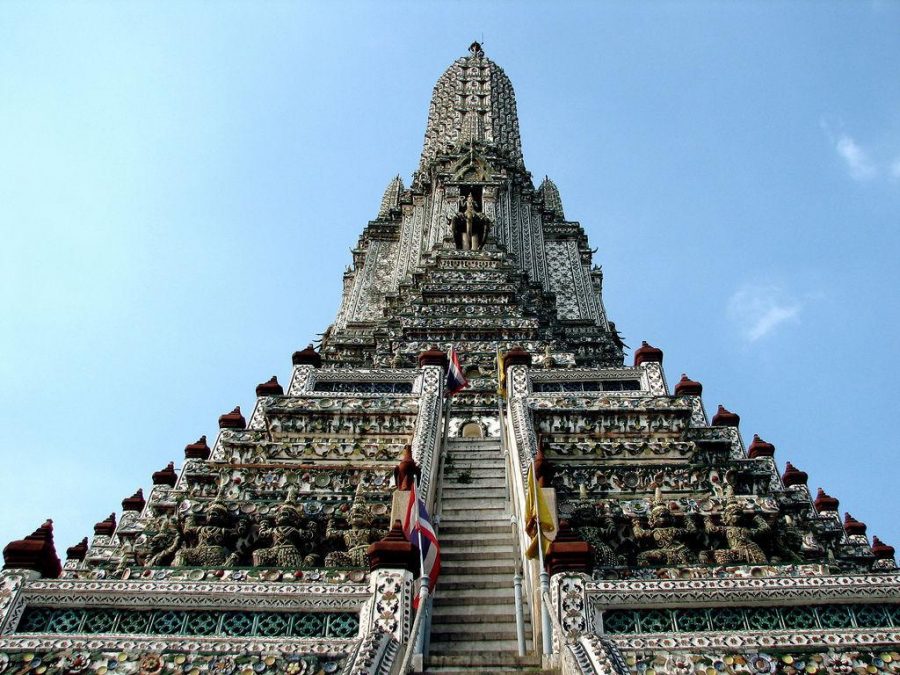 Sydney Schonefeld hopped on a plane and traveled to northern Thailand this last summer to assist at a school for young children. Through the same program as previously mentioned Ferroggiaro and Baker used, Rustic Pathways, she taught local children and improved the school’s outside environment by helping to pave the surrounding areas of the community.

Schonefeld taught children English phrases, played games, and sang songs on her free time but also worked hard to  build platforms for water tanks, plant trees, and pave areas for the children to eat lunch on.

According to Schonefeld, the best thing about the trip was not just the community service, but also getting the privilege to be involved within the Thai community and knowing that she was able to help others in need.

“The fact that we were able to be fully immersed in Thai culture with the villages was great because we got to experience their real lifestyle,” Schonefeld said.
According to Schonefeld, the only challenge she came across during the trip was the groups slow progress in the community service work they were assigned to do.

“The work was really hard compared to the amount of progress we made which was frustrating,” Schonefeld said.  “But knowing that we were working for a good cause was worth it.”

Although there was a language barrier between Schonefeld and the locals, she said it didn’t restrict her because they could often find other ways to communicate making it unnecessary.
“It wasn’t hard to communicate because the people there were really understanding and nice,” Schonefeld said.  Schonefeld claimed there was a huge emphasis on integrating her into the community and making her feel like she was a part of the family.  “It didn’t really matter that you didn’t know the language because they were relaxed about communicating.”

This past summer, juniors Sammy Ferroggiaro and Rory Baker traveled to the Dominican Republic together to help out a community in the town of San Pedro through the nonprofit program Rustic Pathways where they spent 16 days helping the local community, Barrio George.
Their service project involved building a wall around a community garden in San Pedro to keep out unwanted animals that often roam the area. According to Ferroggiaro, the local community members were excited to see the volunteers attempting to improve the area and welcomed them with open arms.
“At least 20-30 people would come out and just want to talk to us, be with us, or help us. A lot of the time you felt wanted and needed,” Ferroggiaro said. “It was really touching to get a hug from the kids or the parents saying ‘gracias’ for playing with their kid.”

According to Baker, the trip taught him a lot of what he considered to be important life lessons.
“The good thing about the trip is it really shows you what you’re really missing in life and what you take for granted,” Baker said.  “I think that that’s a really important aspect of living, that a lot of Marin kids especially, don’t appreciate.”
Regardless of the opportunity, speaking to the locals proved to be an issue.  According to both Ferroggiaro and Baker, communicating with others was a challenge. Although Ferroggiaro and Baker had taken Spanish classes at Redwood, the jump from the classroom to community was starkly different and both had a hard time adjusting.

“Although it was hard, I think being immersed in the culture really helps to have to use [Spanish] and improve it,” Ferroggiaro said.
Day by day, Baker and Ferroggiaro worked with the local children to better lives and the community through Rustic Pathways and acknowledge their newfound inspiration to commit their time to related community service.

According to Baker, besides the satisfaction of knowing he helped others, his favorite part of the trip was meeting all the little children and playing with them.

“When we would go to the communities a lot of the little kids would remember you. It was really sweet,” Ferroggiaro said.