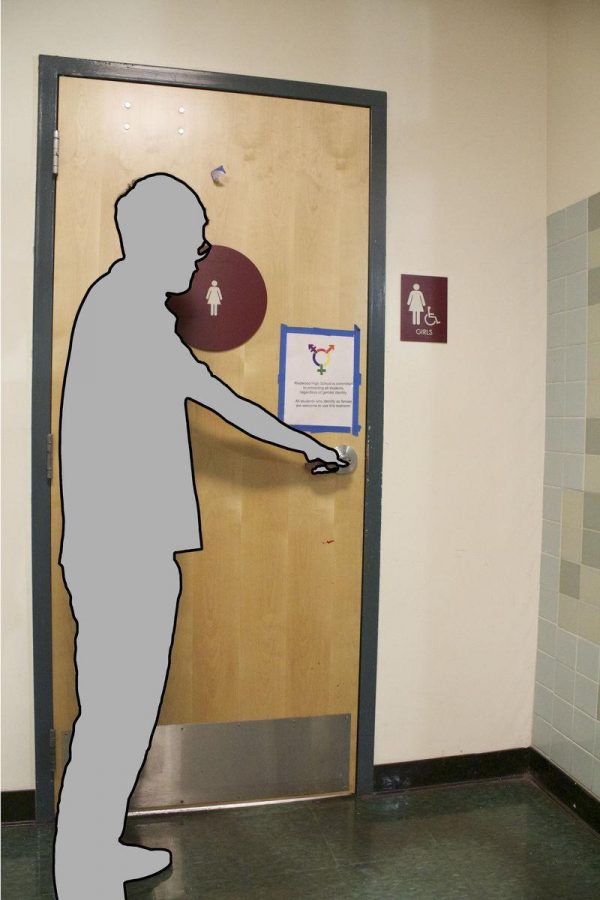 The signs put on the girls’ bathroom read: “Redwood High School is committed to protecting all students, regardless of gender identity. All students who identify as female are welcome to use this restroom.”

Today, thanks to a new California law dealing with transgender rights, the issue is coming to light in the state’s public high schools.

Last month, Governor Jerry Brown signed measure AB 1266 into law, giving transgender students equal access to facilities and activities consistent with their gender identity.  This ensures that “trans” students, whose gender identity differs from their assigned sex at birth, will be able to use the bathroom or locker room of their preference, and even join sports teams of the gender with which they identify.

At Redwood, the law’s effect can be seen particularly at the entrance of the girls’ bathrooms, where new signs read, “All students who identify as female are welcome to use this restroom.”  Signs on the boys’ restrooms have been torn off the doors.

While supported by the Gay Trans Straight Alliance and other Redwood students, the law has been met with some opposition.

Junior Brian Montesinos, president of the Redwood Republican Club, said it could lead to an invasion of privacy.

“It’s a good agenda, but at the same time it can make others uncomfortable and we need to think of the grand majority of people,” Montesinos said.  “For example, it wouldn’t take that much effort for a young kid to say he’s transgender and use that as an excuse to change in a girls’ locker room.”

“If a guy was on the opposing tennis team,” said Gazor, referring to a girl who was born a boy, “it would be unfair because boys are built differently and have higher testosterone levels, enabling them to generate more power and play better.”

Principal David Sondheim, however, is a strong supporter of the new policy.

“The fact that you’re a transgender student shouldn’t prohibit you from playing a sport,” Sondheim said.

The movement to overturn the bill has been led by Karen England and the Capitol Resource Institute, who are petitioning to repeal the law on the grounds that the bill is a safety and common sense issue.  England declined interview requests.

“People who aren’t accepting of trans people are going to have to get over that,” said Jeremy Bearer-Friend, a member of Stanford Law School’s OUTLAW program, an organization dedicated to improving campus life for trans students.

“This will allow trans students to feel like a part of their school and a part of their team,” Bearer-Friend said. “It makes society more inclusive, and that’s a benefit for any gender.”

Although the new law is a step in the right direction for transgender people, they still do not possess the same liberties as other groups in the LGBT movement.  Often, they are the group that is behind the curb in gaining equal rights.

For example, in 2010, the repealing of “don’t ask, don’t tell” granted gay, lesbian, and bisexual citizens the right to serve in the military, but transgender individuals are still effectively barred from joining any branch of the armed forces.  Discrimination extends into housing, healthcare, and schools, and there are fewer laws to protect them in the workplace as compared to gays, lesbians, and bisexuals.

“There are crisis-level highs of unemployment and homelessness in the trans community because of employment discrimination,” Bearer-Friend said.

According to Mark Snyder of the Transgender Law Center, the discrimination is partially caused by low public awareness.

“Many people have yet to meet a transgender person, so the more transgender people come out and share their stories, the more people will come around to support fairness and equality for the trans community.”

Snyder believes that the bill is the first step in the fight for equality.