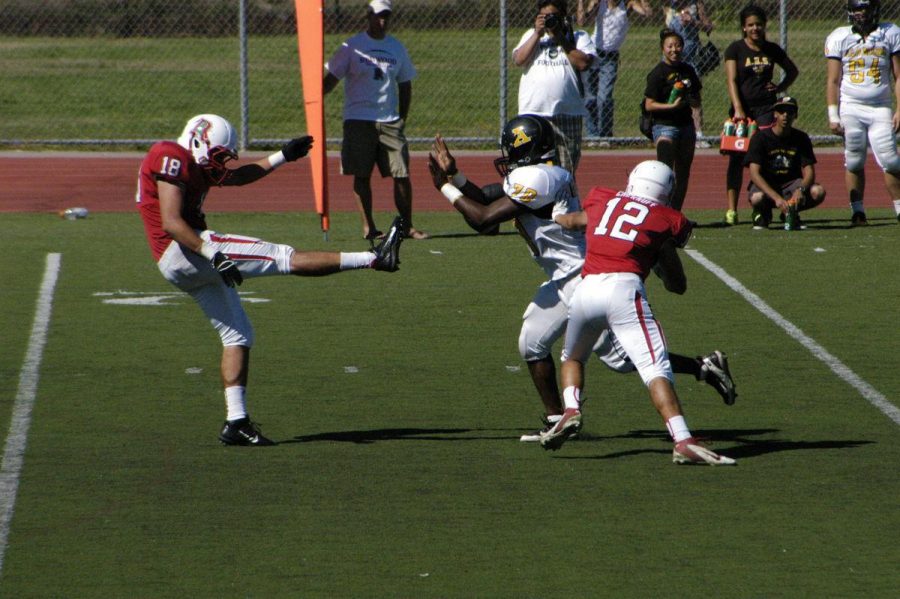 A promising first half for Redwood was derailed by two third-quarter Alameda touchdowns as the Giants fell to the Hornets 20-13 on Saturday afternoon.

Redwood held a 13-7 halftime lead thanks to two touchdown passes by quarterback Aaron Dorfler. However, the Giants’ struggles on special teams would lead to two third-quarter touchdowns for the Hornets as Alameda dominated the second half.

On the opening kickoff of the second half, Alameda returner Keelan Doss broke away from the kick coverage team, advancing deep into Redwood territory before kicker Joe Lamphere made a touchdown-saving tackle on the sideline.

Alameda quickly steamrolled over the Redwood defense to score the game-tying touchdown.

Because Redwood had previously failed on a two-point conversion attempt, Alameda’s extra point gave the Hornets a 14-13 lead.

On Redwood’s next drive, the offense went three-and-out before Zach Chayra’s punt was blocked, setting up Alameda with field position inside the Redwood ten-yard line. The Hornets capitalized with another touchdown to lead 20-13, a score that would hold for the rest of the game.

With 3:21 left in the fourth quarter, defensive back Joe Kasselik deflected a pass headed for the dangerous Doss, forcing Alameda to punt the ball back to Redwood. The offense’s first two plays gained just one yard.

Dorfler, who was under constant pressure in the second half, uncorked a long pass just out of the reach of his receiver, bringing up fourth down and nine yards to go with 2:25 left.

The coaching staff decided to punt the ball away and hope to get the ball back with under a minute left. Instead, Alameda maintained control of the ball for the rest of the game, gaining a first down to run down the clock and close out a victory.

Redwood’s first touchdown, a Dorfler pass to a wide-open Sean Stauffer in the endzone, was set up by runs of 22 and 24 yards by running back Khari Haynes, who injured his shoulder on the second run and was taken out of the game.

The second touchdown came with 33 seconds left in the first half, as Redwood capped an impressive drive with a 17-yard touchdown catch by receiver Jack Cathcart. Twice on the drive, Dorfler’s snap count drew Alameda defenders offsides to set up more manageable third downs for the offense.

The Redwood offense was inept in the second half, however. Early in the fourth quarter, Matt Tracy’s solid kick return was squandered as the offense quickly gave the ball right back to Alameda.

The first Alameda touchdown was an impressive 55-yard catch by Doss, who used a burst of speed and a bit of handfighting to get past cornerback Matt Tracy and haul the long pass into his body with his left hand.

On defense, linebacker Omid Izadjou stood out for Redwood, consistently making tackles around the line of scrimmage.