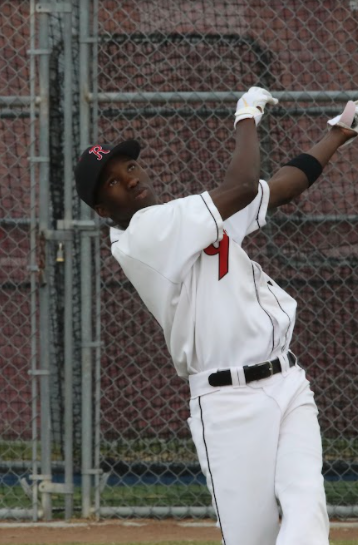 Jerry Omara, one of Redwood’s newest students and athletes, has made quite the journey to California. Omara is currently a junior and spent the first half of his life growing up in Uganda, a country in eastern Africa. He thrives on enjoying life and appreciating every moment, and has carried that attitude into his love for baseball. Back in Uganda, he would spend most of his days hanging out with friends, playing baseball, and of course, going to school. After living in Uganda for 15 years, he moved to Marin to start a new life, leaving behind his life long friends while carrying with him the many talents he has developed.

“Baseball is not very popular in Uganda; everyone plays soccer,” Omara said. “I started playing with a friend in the community, and soon enough more people started playing baseball. It was fun, but it wasn’t competitive like it is here. That is the big difference between Uganda and California. People are more competitive here.”

While Omara continued to develop his baseball skills in Uganda, he learned more about the game and eventually moved to California. He attended Jim Elliot Christian High School his freshman year, Lincoln High School his sophomore year, and now Redwood for his junior year. Through these past years moving around schools, Omara has become extremely capable on and off the field.

“He is really flexible and easygoing. He deals with whatever life throws at him. He was timid when he joined, but we have been able to see the real Jerry and how he is just another player. He has matched so well with us,” Blair said.

Nick Scott, another teammate and friend of Omara’s, also appreciates the additions that Omara offers to the team as a whole.

“People worry about how others will think of them, but Jerry doesn’t. He doesn’t worry about others’ thoughts, and he has a great sense of humor. He laughs and likes to have fun.”

Omara has been greatly respected by his fellow teammates and coach since the start of the season, which has begun to make him feel comfortable in the team environment. Ben Resnick, another teammate and one of Jerry’s catchers, feels this way as well.

“He hasn’t only contributed as a ballplayer, but also with his ability to interact with everybody. He always has a smile on his face, and he’s able to bring positive energy and make practices and games more fun and enjoyable,” Resnick said.

As for Omara, he has felt the love and appreciation of his team in abundance.

“Everyone wants me to feel welcome. My teammates and classmates have done a great job of making me feel comfortable,” Omara said.

With Redwood’s baseball season rapidly moving forward, Omara has demonstrated a big role on the field. He is one of the main pitchers and has contributed on the diamond in many ways.

“Jerry pitched great against a tough Foothill team,” Blair said. “He has really helped out the rotation, and we have been able to give each other tips. He has made the whole team better ballplayers.”

Omara has been an asset to the team since joining as he holds the team’s third lowest batting average against opponents and he has recorded a save against Archie Williams. With MCAL play coming to an end, Omara continues to play an important role on the field, as the team makes a playoff push.

“Jerry will be a huge part of the team as we go for a championship [ because ] he is a great teammate. We are just simply grateful to have him. There is no other way to put it,” Scott said.