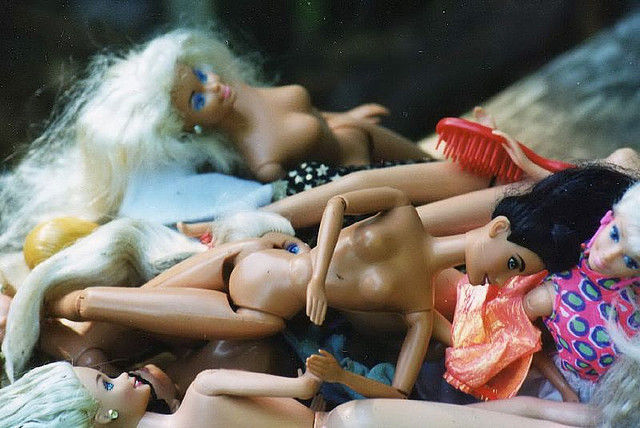 When my 3rd grade sister decided to stop eating her lunches at school because she was afraid she’d get “fat”, I took a step back.  What would make a girl that young feel self conscious of her body and was it my fault?  As a child, I’d always been a little on the heavier side until I hit middle school and was relentlessly picked on because, truth be told, I didn’t fit in.  I recounted the times I’d told her about getting bullied when I was her age because of my body, and felt awful knowing that maybe I’d scared her out of being comfortable in her own.

My sister, who is small for her age, and skinnier than I was when I was eight, was terrified of gaining weight…more so, of not being accepted by her peers because she looked differently than they did.  But as it turned out, she was not the only one doing it; her friends were not eating their lunches either.

It became clear immediately that spewing out the old “there are children starving in third-world countries right now” line wouldn’t do it this time, because the problem wasn’t that she was wasting food, it was that my sister, in whom I saw so much of myself, was already battling the never-ending pursuit of learning how to love and accept herself – something that girls and women of all ages continue to battle with today (many unsuccessfully).  But what angered me the most was that she was losing that battle and not nearly equipped enough with experience to know how to fight back.

“I just want to be a little skinnier,” said my sister, breaking eye contact with me.  A little skinnier for her meant having no body fat left.  Why, I asked her, would you want to be skinnier?  It surprised me to see her annoyance–to watch her glare at me like I should know the answer to what I’d just asked–like it was obvious.  “So I can be pretty.”

Was that what being pretty meant?  In today’s day and age, had beauty been simplified down to something so illogical that it meant skipping out on meals in order to be accepted?

Although it’s been covered over and over again, negative body image is a real issue that affects billions of people everywhere.  The dire need to be “pretty” is what’s putting some of the youngest, most vulnerable girls in our society hand in hand with diseases as serious as eating disorders.  What many don’t realize, however, is the seriousness of this.  According to studies recently conducted by Harvard, prepubescent girls are beginning to develop eating disorders as young as age 5.  How young do these girls need to get before we realize that something needs to be done?

Children, young girls specifically, need to be taught early on that it’s okay if they’re not perfect. Instead, they’re being taught the exact opposite: that they should conform to the unrealistic expectations of beauty that our society has set for us.  The key word there is “unrealistic”.  Today’s gross distortion of beauty boils down to looking, by all means, like Barbie and Ken dolls–dolls that most young girls grow up playing with.  If Barbie were an actual women, she would be 5’9” tall, have a 39” bust, an 18” waist, 33” hips and a size 3 shoe.  More so, if real, Barbie would most likely have to crawl everywhere on all fours due to the proportions of her limbs.

As these girls’ role models, we can’t even accomplish the simple action of creating appropriate toys for them to grow up playing with.  Everything we surround them with today has begun to drive a stake in their sanity and is continuing to reenforce them feeling like they’re not good enough compared to today’s societal “standard”. We’re teaching them to be destructive and insecure.

So how can it be stopped?  It starts with radical self-love.  People look to therapy and medical prescriptions to cure the abominable hatred they have for themselves–insecurity–when really, the answer to their plea is free and it starts with learning to love themselves.  Children need positive role models that teach them that it’s okay to be different–more importantly to be themselves.

More so, young girls like my sister need to learn that no matter what they look like, they’re limitless, beautiful and smart.  They need to learn that they shouldn’t be confined by expectations that other people set for them – and that there’s more to life than being skinny.