Starting from scratch: The boys’ volleyball team spikes off their new season 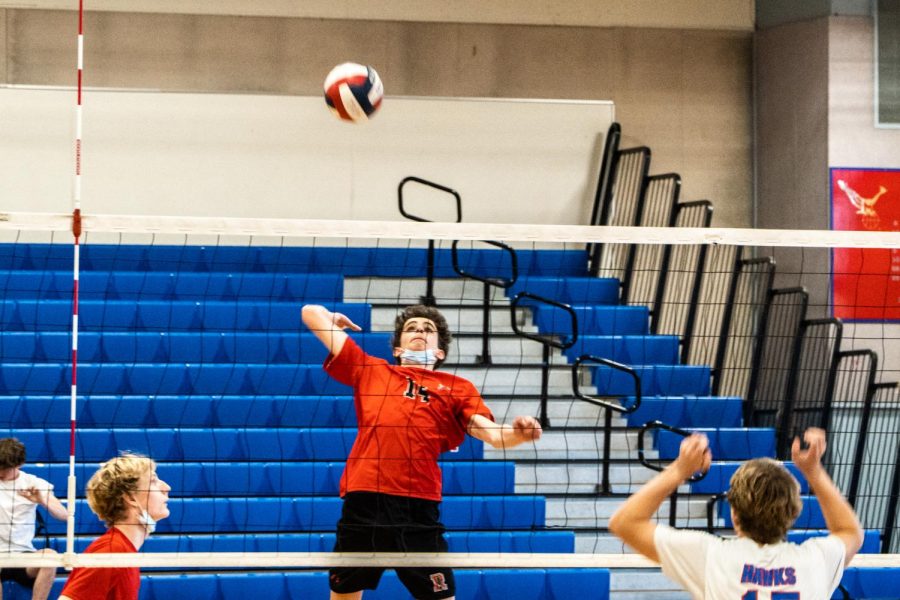 Charlie Gehrman jumps up to spike the ball over the net

On Thursday, Mar. 17, the boys’ varsity volleyball team lost their sixth match of the season against Archie Williams High School by a score of 1-3. Their record thus far this season is three wins and three losses, including the most recent game.

“Team chemistry is still building since it’s early in the season, but I think a lot of us are there just to have fun,” senior Richard Cherry LaBourene said.

While Cherry LaBourene has played non-competitive beach volleyball in the past, this is his first year on a high school team. According to Cherry LaBourene it is not as easy for boys to get into volleyball because most of the club teams are for girls.

“It’s not a very popular thing for young boys and there’s not as much opportunity [to play,]” Cherry LaBourene said. “So, for a lot of the kids, it’s our first time playing and because of that, it makes for a very chill vibe.”

Head coach Ben Wang explained that the inexperience of the older players makes for an interesting dynamic not found on most varsity sports teams.

“All the people with experience are either freshman or sophomores, all the juniors and seniors that are on the team don’t [have experience],” Wang said.

According to Cherry LaBourene, the younger kids are filling into a leadership role and mentoring the rest of the team.

“The kids who do know how to play are helping everybody out and are very inclusive because there aren’t enough of them to make a full team on their own,” Cherry LaBourene said.

“Our team bonding is going really well. Everyone gets along and it’s a lot of fun,” Salvetti said.

When it comes to team strategy, Wang expressed that he was simply focused on teaching the team the fundamentals at this point in the season.

“[The team] is starting from the basics of just learning volleyball, learning rotations, learning fundamentals, like passing and setting before getting into any kind of strategic stuff,” Wang said.

g a spike or a serve. However, while they have much to work on, the players are ready to learn, stated Wang.

“I think they all have a great work ethic,” Wang said. “What I notice is they are all enthusiastic and having fun. [There is] not a lot of baggage with these kids, they’re just all eager to learn.”

In Cherry LaBourene’s opinion, that work has started to pay off. He noted that their win against Terra Linda was unexpected as Terra Linda has quite a few club members on their team.

“[Terra Linda] actually complimented us saying, ‘you guys played really well for having a lot of kids that have never played before,’” Cherry LaBourene said.

Even though many of the team members are just starting, they are optimistic about the future.

“We’re looking good this season even though a lot of us are starting from scratch,” Cherry LaBourene said. “We’re starting to pick it up really quick and we’re bonding while playing together. I think it’ll be a good season.”