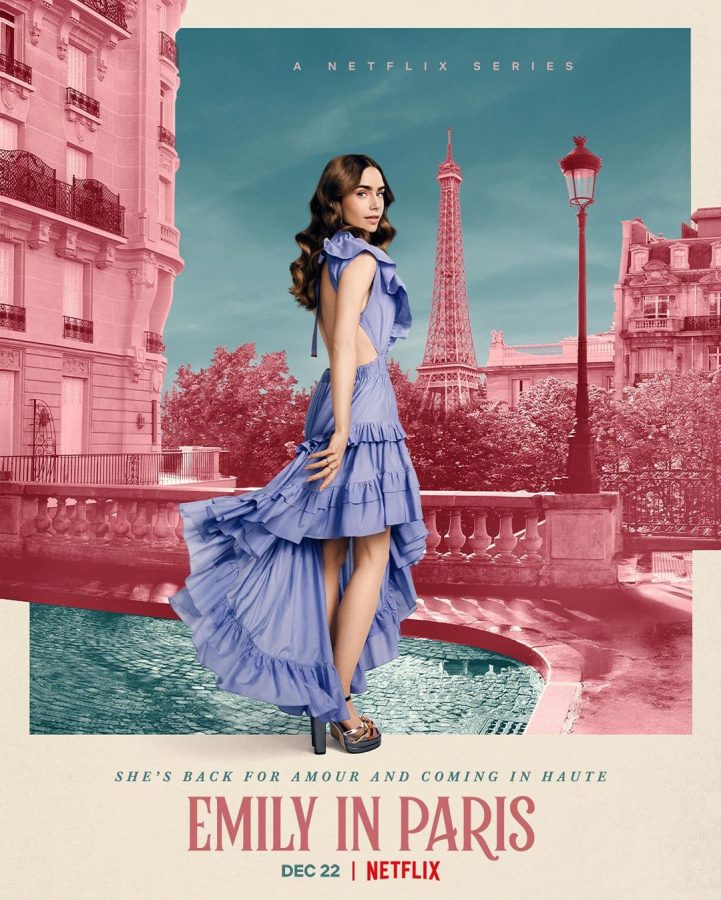 Starting back up for season two, “Emily in Paris” sets herself up for disaster. (Photo courtesy of Netflix)

If you’re interested in watching a “Sex and the City” rip-off with a wardrobe highlighting your grandma’s floral prints, then the Netflix Original “Emily in Paris” is the show for you! A season full of unnecessary drama and random plot twists, the second season of “Emily in Paris” made its debut on Netflix on Dec. 22. Within the first week of its release, the show made its way up to number two on Netflix’s top 10 show list. The new season has fans eagerly watching, as the main character, Emily Cooper (Lily Collins), continues to settle into her new life in Paris, France. Fans receive the dreadful opportunity to watch Emily continue to navigate this never-ending soap opera journey. By the end of this season, you will certainly become disturbed by the fashion pieces and over dramatic episodes in season two, if you haven’t already from season one.

The fashion in this season starts off weak, due to the uncoordinated pieces Emily wears throughout the episodes. At least in season one, the acclaimed fashion director, Patricia Field, eased the transition of Americas fashion into a more European style. Sadly, in season two it seemed as if Field developed memory loss during her styling of Emily. It was incredibly shocking since Field is a well-known fashion designer within the television industry, and has an esteemed reputation for designing outstanding outfits for various celebrities. It’s hard to believe a fashion designer like Field could go from the forefront of the fashion world to such a tasteless Netflix show. “Emily in Paris” desperately needs the fashion sense that Field s delivered in “Sex and the City” to the main character Carrie Bradshaw. Emily’s gaudy patterns and nausea-inducing designer pieces that she pairs with her Gucci slippers will make you want to burn the next pair of Gucci slippers you see.

As if the interesting fashion choices weren’t atrocious enough, Emily, an American marketing executive, annoys her fans every time she pouts, whines or sulks when she confronts an obstacle. (Spoiler alert) Throughout the second season, the writing staff clearly lost interest in the show by constantly relaying the same ‘love triangle’ that was already heavily overdone in season one. Emily remained oblivious to the idea that hooking up with her best friend’s boyfriend behind her back was wrong on many levels. At least in this season fans got to watch Emily put more effort into learning French. Emily’s attempt to learn French, however, was nothing short of painful. Sadly, it seems as if Emily was more focused on having an affair with her friend’s long-term boyfriend than paying attention in her French class.

Director Darren Star’s Emmy-nominated Netflix comedy can be interpreted through multiple lenses: a biting satire of femininity, a converted “Sex and the City” fan fiction or a deeper insight into how much the French hate Americans. As expected, the French have no sympathy for Americans, which was clearly demonstrated throughout the entire show. Hopeless and confused, Emily continues in her attempts to improve her painfully disorganized life in Paris. As the season progresses, her actions do not become more manageable as she continues to neglect Parisian culture and constantly speaks on behalf of her co-workers at her job as a marketing executive which, shockingly, makes her some enemies.

“Emily in Paris” has caught the attention of many, bringing endless second-hand embarrassment to fans as they watch Emily attempt to pull her life together for 10 painfully long episodes. Seasons three and four are already set to air towards the end of 2022.  Hopefully, that will provide some more laughable material for viewers. After the second season, Emily isn’t the only one posting the hashtag #OhCrepe.