A look into the 2022 College Football Playoff National Championship 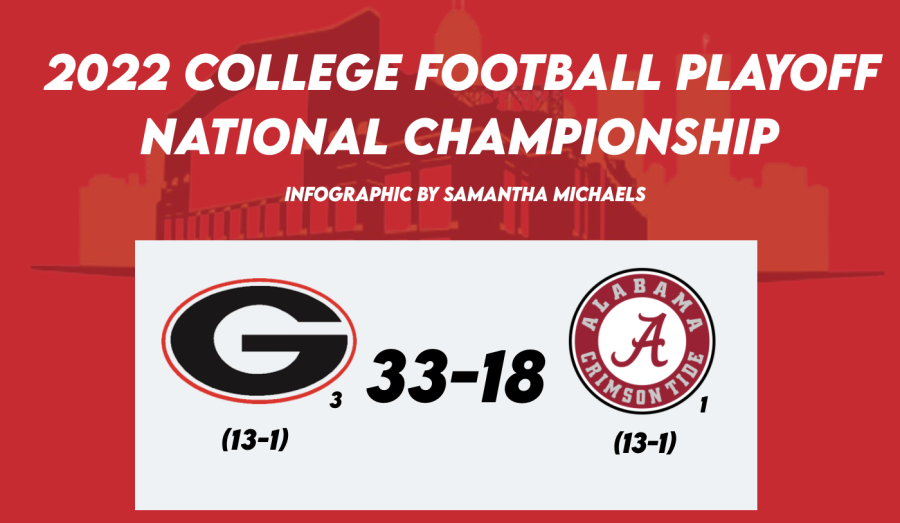 Although the 2021 college football season has come to an end, it is only right that we look back on a game that encapsulated yet another year of heartbreaking injuries and triumphant comeback victories: the College Football Playoff National Championship. In the final matchup of the season, the University of Alabama Crimson Tide took on the University of Georgia Bulldogs in Indianapolis on Jan. 10. As Alabama and Georgia fans alike packed into a sold out Lucas Oil Stadium, millions of fans across the country tuned in to watch the highly anticipated rematch of the two Southeastern Conference (SEC) powerhouses who have dominated the polls all season long. Coming out of the gate, the nerves of this high stakes game set in, and the strong defensive effort on both sides had the two teams headed into halftime with only field goals under their belts, with Alabama in the lead. At the start of the third, both offensives started to gain momentum, turning into a back and forth shootout against the clock. After a heartbreaking fumble from Georgia quarterback Stetson Bennett in the fourth, it seemed to be Alabama’s game for the taking. However, a perfectly-timed pass to tight end Brock Bowers for a touchdown reception and a thrilling pick six from defensive back Keelee Ringo ultimately allowed Georgia to pull away at the end of the 4th quarter and lead the Bulldogs to their first National Title in over 40 years. Check out the infographic below to look at team statistics, standout players, controversial calls and more from this National Championship game that did not disappoint.