One year after the Capitol insurrection, America reflects on its political division 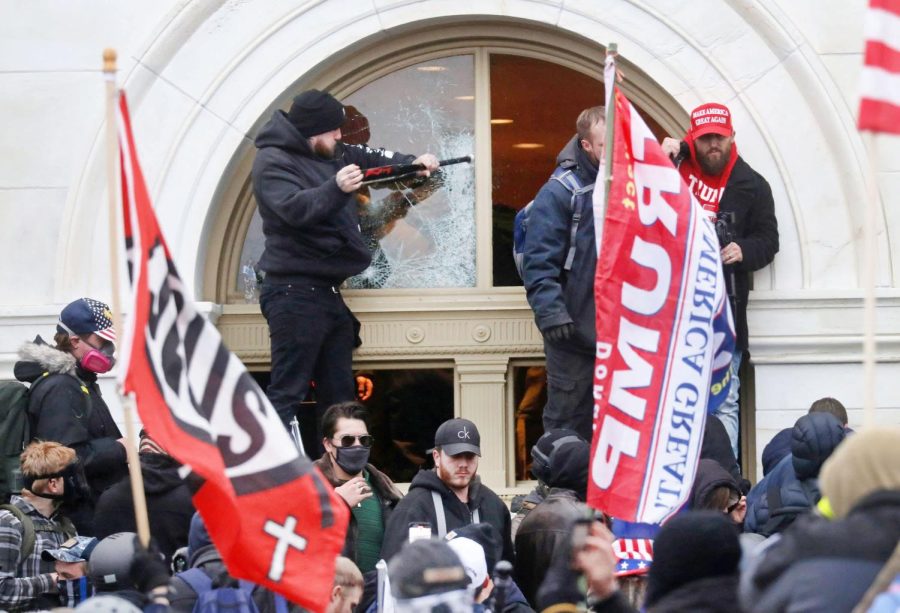 Jan. 6, 2022, marked the first anniversary of the United States Capitol insurrection where thousands of vexed protesters rioted in an attempt to interrupt President-elect Joseph R. Biden’s entrance into the presidency. The day was initially devoted to members of the House of Representatives and the Vice President to certify votes from the 2020 election and officially deem Biden the 46th president. However, what originally started as a Trump rally held outside the Capitol turned violent. The mob consisted of former President Donald Trump supporters who were hoping to keep him in office. With over 700 arrests made in the past year and ongoing investigations that are still pending, many insurrectionists have been charged with assault charges, destruction of property and impeding officers. Five citizens died amidst the chaos and violence, including a Police officer. Over a year later, citizens remain divided over the 2020 election, leaving behind significant implications in our community which some citizens are seeking to repair through political unification.

In response to the first anniversary of the insurrection, President Biden spoke out in an address from the U.S Capitol on Jan. 6. Recognizing the significant divide the event imposed on America, Biden placed underlying blame on former President Trump.

“For the first time in our history, a president had not just lost an election; he had tried to prevent the peaceful transfer of power as a violent mob breached the Capitol. But he failed,” President Biden said. “On this day of remembrance, we must make sure that such an attack never, never happens again.”

The storming of the Capitol left a powerful impact on the country, which President Biden described in his address. He emphasized the need for peace and unification to sew the wounds of the nation.

“This is not a land of kings or dictators or autocrats. We’re a nation of laws, of order, not chaos; of peace, not violence,” said President Biden.

Across the country, teachers addressed the riots in classrooms, noting their significance and effect on students and teachers alike. Government teacher William Crabtree associates the insurrection with a desire for political power and believes the only way to fix the current political distress is to communicate with one another.

“[The insurrection] is going to be talked about forever, just like 9/11. These events mold and shape future events, either good or bad,” Crabtree said. “[We need to] listen and quit complaining. Real power and influence is earned through actions that don’t benefit yourself.”

Junior Jack Haubold is the president of the Junior States of America (JSA) Chapter at Redwood, a club that discusses and debates political topics in the community and at a national level. For Haubold, the event holds great significance and demonstrates the threat America’s democracy has faced over the past few years.

“[The insurrection] wasn’t the start nor the end of our democracy’s peril. One big issue is that we can’t recognize or agree upon what even happened. Some didn’t think it was bad, some [even thought] that the insurrectionists were doing a good act [by storming the Capitol]. That is truly a big issue for America’s democracy — we can’t even agree upon simple facts,” Haubold said.

Following the event, Haubold noticed an increased sense of awareness across Redwood’s campus regarding the insurrection and political life in general. To him, most people seemed to be aware of the political division that had existed for some time, but for those who hadn’t, the event was a true surprise.

“[The Capitol insurrection] was a major shock to anyone who didn’t recognize the threat America’s democracy faced. [This threat] didn’t just start after the 2020 election, it had been previously perpetuated and the [insurrection] really opened peoples’ eyes,” Haubold said.

According to Athena Raskin, president of the Redwood Democrats Club, the only way to aid in re-establishing a unified America is to recognize and respect our differences.

“Finding peace with each other is always more effective. This is a big country, but we all need to learn to live with one another. You can have a difference of opinion, but we need to tolerate and respect that people have [differing opinions],” said Raskin.

Raskin notes the importance of remembering and appreciating the events that occurred on Jan. 6, and hopes that we can restore nationwide peace as the years go on.

“Everyone is a human and wants what’s best for the country. If we can learn to tolerate others, we can find peace,” Raskin said.