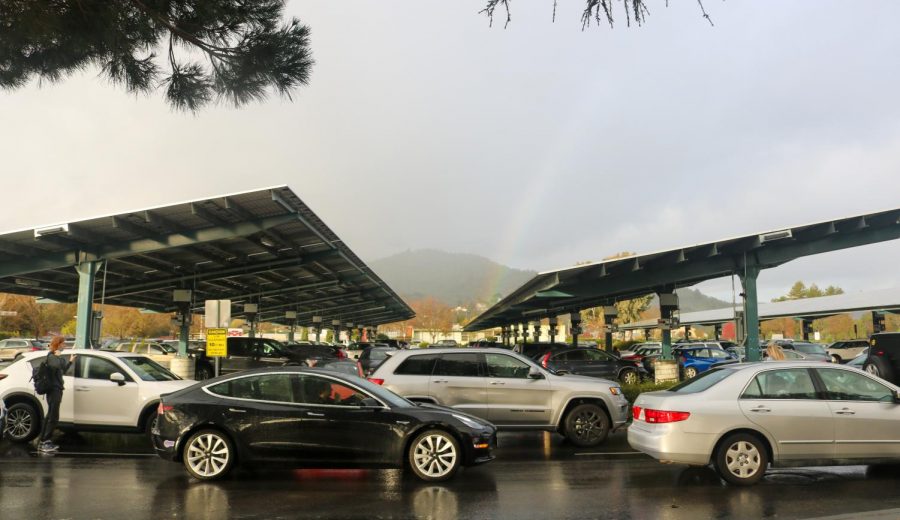 The Mt. Tam reports the highest rainfall levels in the Bay Area, with a brief break in the storm near the end of the week.

In the past week, Marin County has been hit with record-level rainfall. According to the ​​National Weather Service, the Mt. Tam area registered the highest rainfall totals across the whole Bay Area at 11.37 inches in just 72 hours. The average rainfall totals in coastal higher elevations, such as the Mt. Tam regions, were four to eight inches. Additionally, the ​​National Weather Service reported that downtown San Francisco received around 11.69 inches of rain, making it the ninth wettest water year on record.

Severe weather in the past few days has prompted cancellations in some California school districts, such as the Amador County Unified School District in Amador County, just west of the Bay Area. In contrast, Redwood has continued with normal operations despite the rainfall, with minimal effect on the school day. Principal David Sondheim believes that continuing school as normal is the most effective approach, and is grateful it is possible.

“In general, school has been able to operate pretty normally, which I feel very fortunate for,” Sondheim said. “Our maintenance and custodial crew and teachers and students have all been adjusting really well.”

Redwood students echo this sentiment, which is logical considering its timing: Monday, the heaviest day of rainfall so far, was the first day of Finals Week.

Senior Yaelle Etienne points out that recovering from distance learning during COVID-19 shutdowns places emphasis on attendance, even during difficult weather conditions.

“As much as I don’t want to come to school in the rain, I hope we don’t [close],” Etienne said. “I don’t want to miss out in my senior year because I already missed so much [during distance learning].”

“I hope they don’t close school at all, because like [Etienne] said, we’ve already missed so much,” Boehm said. “If it’s not something drastic, school just needs to stay open and we need to learn to deal with the rain.”

Nonetheless, there are still obstacles to operating normally at school during the rainy season. Redwood is located in close proximity to Corte Madera Creek, which has a tendency to flood during high tides and periods of heavy rainfall. Additionally, the front parking lot— though outfitted with a preventative drain system— has historically been a flood danger. Sondheim acknowledges this liability, admitting that Redwood is in a more significant flood danger zone than other schools in the Tamalpais Union High School District.

“Each school has its own [weather safety] challenges. For us, here at Redwood, the front parking lot is probably the biggest one,” Sondheim said. “There’s a mechanism under the parking lot that helps manage [flooding], but sometimes it can get overloaded.”

Steps are being taken to find a solution for the drainage issue, but students and staff who commute by car still find difficulties getting to school. Assistant Principal Sue Hall noted the chaotic parking situation during the mornings of Dec. 13 and Dec. 14.

“We have been having trouble with the flooding in the front lot,” Hall said. “Some kids were still able to park because most of [the flooding] was in the middle of the lot, but it’s not great. The district office is trying to work on that for the future.”

However, many drivers were not even able to make it to Redwood’s campus in the first place. At the start of the rainfall on Sunday, a portion of Highway 101 near the Seminary Drive exit in Mill Valley was closed due to downed power lines from the storm, as was the eastbound lane of Sir Francis Drake Boulevard west of Fairfax on account of rain damage.

Sophomore Bradley Williams recognizes the difficulties in getting to school when drivers are faced with these obstacles, but appreciates the long-awaited rain.

Nonetheless, Redwood is taking steps to keep school accessible and safe as rainfall continues. As Hall points out, measures are already being taken in the past few days to protect students.

“The floors are slippery [so] we put down a lot of rugs at the entrances,” Hall said. “I still worry about kids because sometimes there’s still a little dampness on the floor, but as the rain keeps coming, I would [tell students] to continue to be careful walking and make sure they dry their feet.”

Sondheim also highlights the work that Redwood administration has done to keep the school safe and advises students to be careful during storm season.

“We’re checking the drains, checking the school buildings for any leaks and resolving them quickly, checking the weather and the tides. [Students] should stay as warm and dry as they can and be ready for rain throughout the rest of the week,” Sondheim said.

The ​​National Weather Service predicts the rain will resume Wednesday afternoon and carry over into the weekend, tapering off around Thursday of next week. A high surf warning is currently in effect, and flood warnings are expected to follow as the rain persists.