Purge your mental closet: Fashion being superficial is so last year 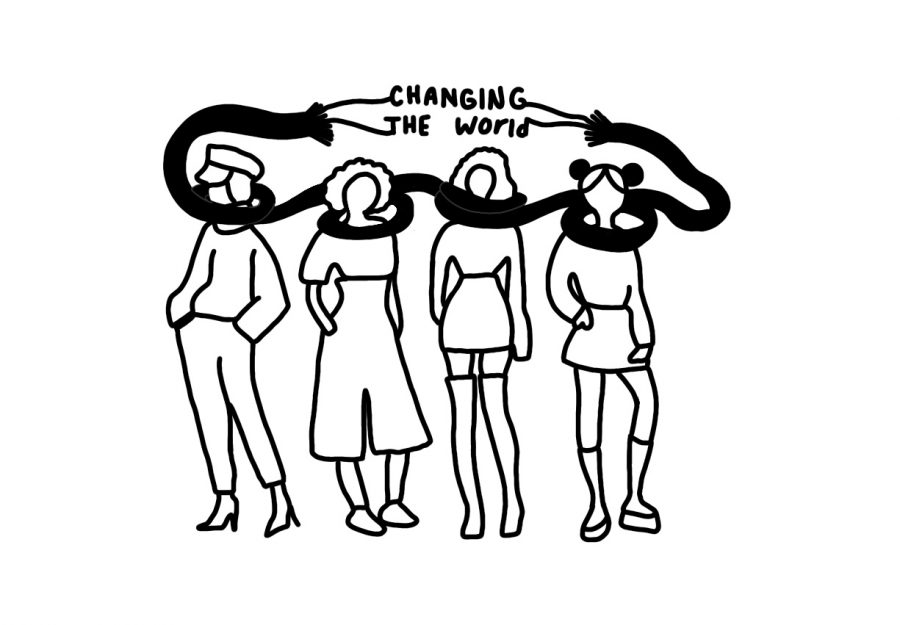 Picture this: you have had no sleep because you spent the whole night working on your history project due the next day. When you wake up, you try so hard to pull your groggy self out of bed. As you open the dresser, the new outfit that caught your eye lies waiting to be worn. Instantly, the frown turns upside down and the day is looking better already. With your head held high, you strut confidently into your first period class. Time stops. Everyone stares in awe at the new outfit you flaunt. This piece of fabric on your body makes you feel as if you own the world.

The fashion industry doesn’t just benefit those who wear the clothes, but everyone who participates in it. The employee, designer and consumer all play a part in expressing one’s true self, whether it’s the creativity that goes into the design or the people who choose to buy it. The creativity within the fashion industry is unmatched and requires a new way of thinking than many other career paths. The uniqueness and complexity of the fashion industry are often overshadowed by the universal concept that the industry and the people who work in it are “shallow and superficial.” What society fails to realize is how much fashion has to offer; fashion not only impacts people’s ways of expression and personalities, but it is also influential culturally, socially and revolutionarily.

The root of the idea that fashion is superficial stems from those who advertise this false narrative. Children’s books and TV shows often portray fashionable women to be sassy and snotty with an obsession for glitz and glam, as if they have nothing else to offer besides their pink accessories. “Pinkalicious,” “Eloise in Paris” and Disney Channel’s “Jessie” don’t give the impression that the fashion industry is well-respected or is made up of intelligent designers, but rather that those who work in fashion are simple-minded and talentless. According to a November 2021 Bark survey, 53 percent of Redwood’s population believes that the fashion industry is somewhat superficial and 24 percent strongly agree with the statement. If over half of Redwood’s student body has beliefs that the fashion industry is superficial, these ideas may have stemmed from the upbringing of these teens, including what’s discussed about and advertised around them. Books and shows aren’t the only cause of this mindset; celebrities also play a role. The Kardashian family is most famously known for their extravagant outfits, spending habits and life of luxury. What the Kardashians reality show, Keeping up with the Kardashians, and the paparazzi advertise are what they want consumers to “eat up.” Their goal isn’t to show the complexity of the fashion world, it’s to get views. If Kim Kardashian’s most famous line is, “My diamond earring is gone,” society isn’t going to alter their beliefs that the fashion world is shallow and superficial — it is going to drive this culture.

The 75 million employees within the fashion industry craft clothing that each personality, gender, sexuality and race can wear to express who they are to the world without having to speak a word. Not only can garments express who you are as a person, but they can express what you believe in. Who can criticize the fashion industry for being shallow and meaningless when the work of these designers influence social movements across the globe? Many pieces of clothing have become iconic in movements across the world pushing for change. The Pink Beanie worn by almost half a million people at the 2017 Washington DC Women’s March became a nationwide symbol to protest the incoming Trump Administration that imposed threats on women’s rights. Denim Day, a day for wearing denim closthing, occurs on the last Wednesday of April, bringing awareness to sexual assault and its survivors. These clothing items bring people together because it’s something everyone can be a part of. Society can see just how many people are pushing for political revolutions when there is a universal outfit for the issue.

Children’s books, TV shows and celebrities don’t accurately portray the importance of fashion and all it has to offer, especially to young women and how they view themselves. Fashion icon Coco Chanel played by her own rules when starting her business in 1913. This era in American history encouraged women to only perform domestic duties. Chanel pushed for women to live freely and be comfortable and confident in their own skin, not to dress to please the opposite sex. Chanel is most famous for her quote, “I decided who I wanted to be, and that is who I am.” Chanel’s impact on not only the fashion industry but women worldwide has allowed her legacy to thrive for years after her death in 1971.

The Pink Beanie, Denim Day and Chanel have all touched millions of lives throughout the country and created unification to solve pressing issues by using fashion. However, the fashion industry continues to be portrayed negatively. Instead of feeding into consumer culture by watching those superficial shows and buying those superficial books, show your children that there is no wrong profession, and that not only is working in fashion a respectable career, but fashion is also an important form of creative expression. And instead of criticizing the industry’s negatives, such as sweatshops and environmentally harmful brands, actively work towards changing these negatives. \Although the fast fashion industry may use these tactics, not every fashion brand has to. By showing kids that fashion is a worthwhile career and has long lasting impacts, the way fashion operates will begin to change. Those children who will one day work in the fashion industry can use eco-friendly producers and ensure safe and fair working conditions for their employees. Encourage those around you to buy from designers who go the extra mile to be eco-friendly and local, and who spend countless hours making one-of-a-kind clothing. Whether fashion is incorporated into your culture, your identity, or just how you feel,everyone wears clothes, and the world of fashion should be rightfully appreciated.