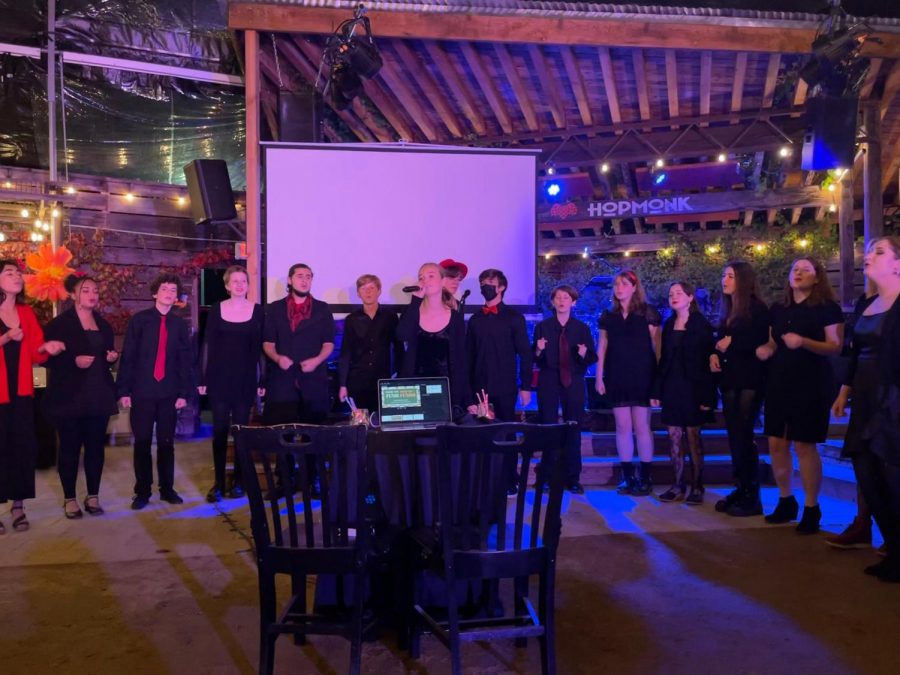 “I’ve heard many of my students say that [our program is] a musical family. It’s an important place for people to connect outside of school,” Til’ Dawn’s acapella director and singer/songwriter, Austin Willacy said.

Established in 1988 and still thriving today, Til’ Dawn is a non-profit Youth in Arts program. Before their shows, the Til’ Dawn acapella group awaits their time on stage as anticipation builds. The group may be nervous, but their shared passion for singing keeps them steady before audiences. Whether they are performing at halfway houses or the Marin Country Mart, Til’ Dawn must display their talent countless times throughout the year, so perfection is key when rehearsing their pieces.

“Before COVID-19, Til’ Dawn would perform somewhere between 20-25 times a year. I am responsible for arranging and teaching the pieces we perform, as well as fine-tuning the performance presentation of the group,” Willacy said.

Willacy not only works to improve the choir’s singing ability, but he also creates a family-like environment by planning retreats with the group about three times a year. Retreats  always include games and group bonding, which Willacy believes strengthens relationships and singing cohesiveness.

“If an ensemble is going to present on stage, I have to ensure that the bond between the singers on stage is tight. A big part of the work I do with the group is around interpersonal connection, team building and gratitude sessions,” Willacy said.

Emma Orrick, a junior at Redwood and a singer with Til’ Dawn, grew up watching her father produce music and it has always been something special in her life. Orrick believes that relying entirely on the voice to create music is what brings her closer to her singing mates.

“In rehearsals, there’s a lot of sharing and connecting when we sing because a big part of acapella is participating with your peers since all you use is your voice. The relationships I have with some of the people in the group are stronger than I have ever had in my [personal] life,” Orrick said.

Even if the show doesn’t go as planned, getting to present what the group has been practicing is one of Orrick’s favorite parts of performing.

“For people who don’t know a lot about music, getting to see [the audiences] reactions to our performances is always fulfilling. The [feeling of] adrenaline and being vulnerable on stage [creates an atmosphere where] no matter what happens, you know you accomplished something great,” Orrick said.

Not only do the performers enjoy watching the crowd react, but the audience members express their contentment with body language and dancing. Til’ Dawn’s repertoire consists of a variety of old, new and classical music ensuring a pleasant experience for all audience members. Orrick has even witnessed her older audiences “light up and start to dance” as they sing songs from decades ago.

However, Til’ Dawn does not just move older audiences, they draw out emotion from students as well. Leah Nemerovski, a junior at Novato High School, auditioned for the group after hearing Til’ Dawn sing for the first time at an outreach event at her school. Nemerovski has been a member for three years and claims that her performing skills have grown tremendously because of the group.

“The director, Austin Willacy, has been a great mentor to me and has taught me so much more about music. I’ve also grown my performing skills as we usually perform at least once a month,” Nemerovski said. “Getting to perform so often has allowed me to become a good leader, and Til’ Dawn has inspired me to continue my musical endeavors in the future.”

If you want to see Til’ Dawn live, their next performance will take place on Dec. 27 at the Jewish Community Club (JCC) in San Rafael.