Bruno Mars and Anderson .Paak’s new album will give you an evening you’ll never forget 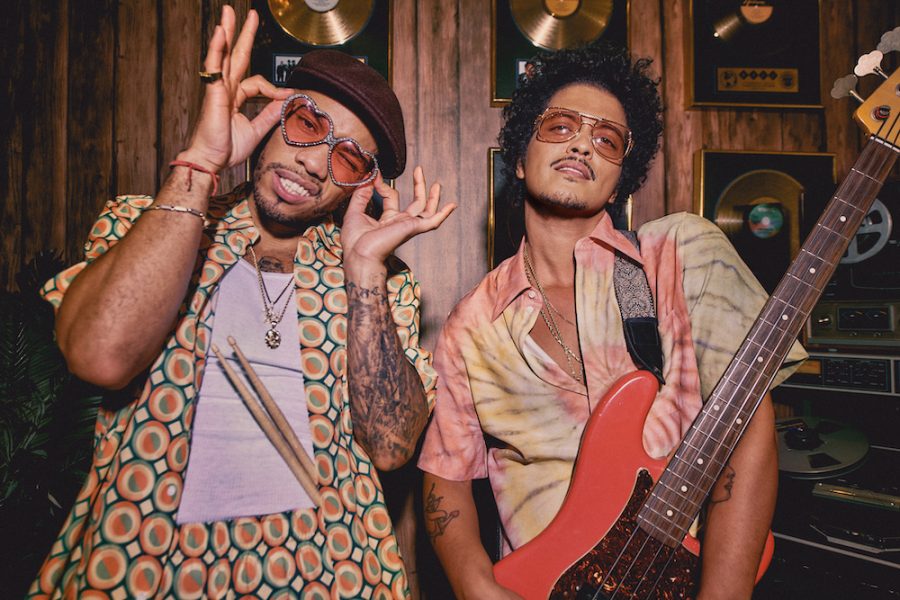 Since 2016, late 20th-century nostalgia has blasted through the pop music landscape. New, yet familiar sounds have been invading the airwaves as artists attempt to find other styles outside of the New-Wave Synth Pop that dominated the early 2010s. Today, the stylistic shift that many pop artists seem to have latched onto seems to be mixing modern 808 sounds with the themes of the 1980s: older synths, bass, and guitar styles.

Bruno Mars, specifically, has a tendency to break the current rhythm of pop music in favor of sounds he believes better fit his style and vocal abilities. His most popular album, 2016’s “24K Magic,” was straight-up a 90s R&B album, frequently utilizing talkbox vocals, bouncing basslines, and the signature G-Funk synthesizers.

Such a concept is showcased in the theme of his new collaboration project — and he could not have picked a better partner to execute it with. Anderson .Paak, who found initial fame with 2016’s “Malibu,” has been a leader in the West Coast neo-soul and funk movement that has influenced numerous artists in the past few years.

The duo’s, or “Silk Sonic’s,” debut single, “Leave The Door Open,” broke the internet with its 70s inspired grooves, popping piano and bells, beautiful use of falsettos, choir-like vocals, and the undeniable chemistry between the two lead artists. Less than a month after its release, the song had more than 230 million streams on listening platforms and 90 million YouTube views.

“An Evening With Silk Sonic” is a solid blend of 70s psychedelic funk and modern neo-soul that satisfies one’s craving for an album that stresses quality over quantity. Originally, the 31 minute, nine-track project runtime can be perceived as rather short, especially compared to the lengthier durations of most attention-garnering albums. Nevertheless, the runtime is perfect for a project like this, as it is long enough to incorporate the numerous different sounds of the 70s pop music, but does not overstay its welcome.

Those who listen to 70s music will easily recognize clear influences on numerous racks throughout the project. “Skate,” a song driven by its shiny guitar riffs and clean orchestral moments, is reminiscent of the styles of Kool and the Gang or Barry White. “Put On A Smile,” which showcases Mars’ vocal ability, is similar to Marvin Gaye and his smooth-jazz piano-based groove.

The project’s sound becomes stale, however, when the duo leans into their influences too much — causing a repetition of themes on multiple tracks that dull an otherwise rather crisp listening experience.

The third track, “Fly As Me,” and the seventh track, “777,” are both essentially more polished versions of tracks you would see on a James Brown or Little Richard project. While neither are particularly bad tracks, both are stylistically identical. The omission of “777” would have smoothened the listening experience and avoided slowing the flow of the project.

The best songs on “An Evening With Silk Sonic” are the ones that both embrace their influences while modernizing past styles. Case in point: the best track is “After Last Night,” which features esteemed bassist Thundercat.

The song shamelessly exploits each featured artists’ strengths to their full extent. Mars and .Paak’s vocal synergy is on full display throughout the track, Collins’ naturally smooth spoken word adlibs are wonderful and it’s all laid over a beautifully atmospheric yet cinematic backing conducted by Thundercat’s bass. Each artist brings the most to the table with their unique skill sets, creating a fantastic four-minute listening experience that only gets better when it’s followed by“Smoking Out The Window,” another flawless track.

Although some songs seem lackluster compared to the rest, Mars and .Paak were very successful in developing their vision for what Silk Sonic could be. If you are looking for something genre-bending or boundary-pushing, “An Evening With Silk Sonic” is going to disappoint you. However, if you want a groovy and fun half an hour from two of the most consistent artists in the music industry, this album is indispensable.