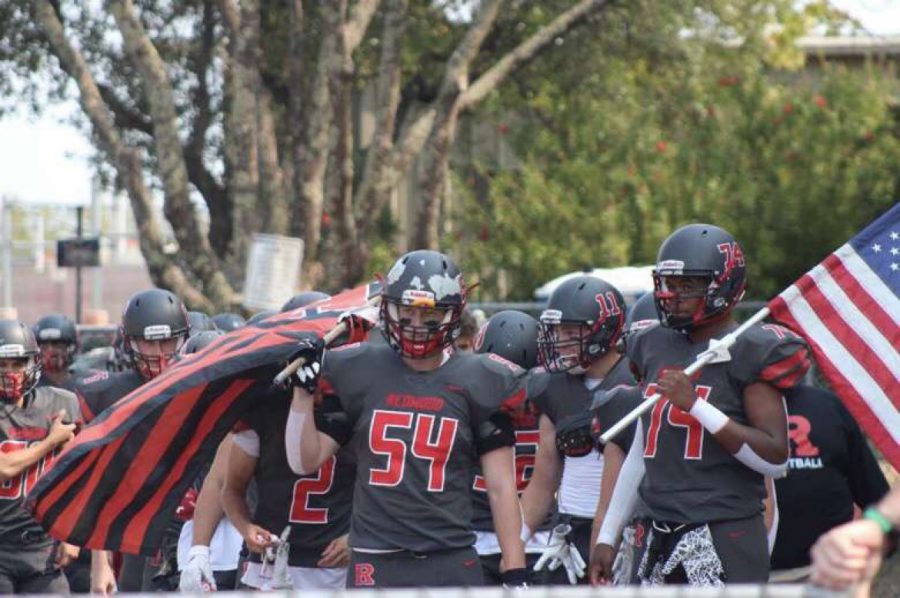 Despite the unprecedented and injury-ridden 2021 spring season, Redwood football returned this fall strong and ready for their second season within eight months. Although the team was not successful while pushing for the playoffs, their hard work has been recognized by the annual MCAL All League list, which placed eight Redwood football players in Marin’s all-star lineup. The list honors players across the county for standout performances and statistics in their respective positions.

Senior captain Jimmy Phelan received the Lineman of the Year award after starting on both the offensive and defensive line this year. In addition to his hard work, he attributes much of this success to bonding with his teammates

“Because of COVID, we weren’t as close with the senior class last year and we never got to bond with them the same way. This year we’ve been with the juniors and sophomores the entire time. We trained during the summer and actually had school with them. We meshed better as a team because of it,”  Phelan said., “Our quarterback was the same year-to-year, which is very important for chemistry.”

Junior Brady Weingart stepped in as quarterback last year after senior Clayton Grace was out with an injury. Weingart has improved immensely in his leading role on the offense over the past two seasons. He was awarded a spot on the Second Team Offense for his position, throwing for 2,231 yards and 28 touchdowns with a quarterback rating of 144.1 in ten games.

“[Weingart]’s always going to be one of my good friends. When he gets hit I’m going to help pick him up. It’s the same thing in school every day,” Phelan said. “He’s never had an ego, like some quarterbacks unfortunately do.”

Phelan’s award is the top honor for linemen in the county, and it is especially significant considering the nature of his position.

Behind the offensive line every game was senior Valentino Starbird, who was awarded Second Team Offense as running back after accumulating a total of 897 yards and 14 touchdowns on 126 touches.

“I was really honored to know that I was one of the top players in the MCAL division,” Starbird said.

Starbird also felt that team chemistry this year was especially strong. He attributes the welcoming and hard-working atmosphere to the odd circumstances last season.

“Our team really got closer as the year went on, because last year was such a weird year when it came to sports. We practiced the whole year only to find out we couldn’t play. Everyone’s aspirations for that season dwindled, and then when it was announced that we could play games everyone got really excited. So, this year was building off of that,” Starbird said.

Starbird saw the strong team connection play out on the field, as teammates supported every player no matter rank or position.

“[In] our tougher games, like against Marin Catholic or San Marin, where some of the starters [had] to come out for some reason, [you see] people who normally don’t play as much go in the game. Whenever they perform it rallies the whole team, and all of that comes from us having a close team.”

On the other side of the ball, senior Hudson Lavinsky won First Team Defense as a middle linebacker with 53 total tackles this season. 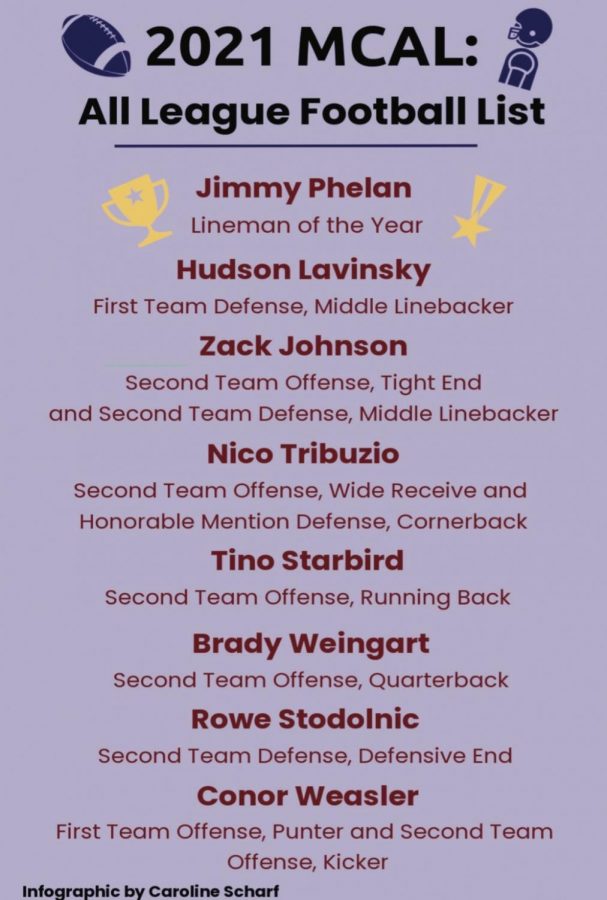 “It’s definitely a good way to finish the year. It made everything feel worth it to me, because we didn’t make playoffs,” Lavinsky said.

Lavinsky felt that the defense played well this year, asserting that the team’s ability to work as a unit was a significant factor in their performance.

“We clicked really well early on and we didn’t allow a lot of points, even in some of the games we lost,” Lavinsky said. “Knowing that the guys are still confident in you and not allowing the momentum to completely shift for the other team [is important].”

Next to Lavinsky on the defensive side of the ball this season was senior Zack Johnson, who received recognition on the Second Team Defense and the Second Team Offense. Johnson finished the season with 56 tackles and two interceptions as middle linebacker, and caught 54 passes for 644 yards and nine touchdowns as tight end. Another star on both sides of the ball was Nico Tribuzio, who was voted to the Second Team Offense as a receiver and the Honorable Mention Defense as a cornerback. Tribuzio led Redwood’s receiving threat alongside Johnson, bringing in 34 catches for 487 yards and 7 touchdowns on offense, in addition to his 19 tackles and a pick-six on defense.

Juniors Rowe Stodolnic and Conor Weasler, both players who were pulled up to varsity last season, were also awarded spots on the All League lineup. Stodolnic was voted onto the Second Team Defense for defensive end, with 39 total tackles, 6.5 sacks and two forced fumbles throughout the season. Weasler was awarded a spot on both the First Team Offense and Second Team Offense, as punter and kicker respectively.

After fighting through a tough season, many of Redwood’s players earned meaningful accolades. With multiple juniors on this year’s list, and many more motivated to put MCAL on notice next season, Redwood will continue to receive All League recognition in the coming years.