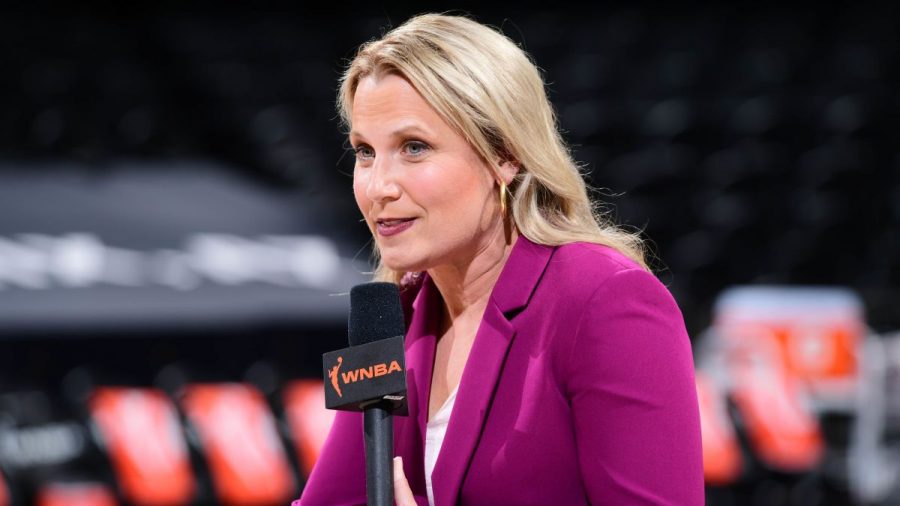 Broadcasting for a WNBA game, Byington analyzes the court in order to display her play-by-play announcing skills. (Courtesy of CNN)

“Speaking of spotting up — Jrue Holiday beating the buzzer!” Lisa Byington said as Jrue Holiday shot a three-pointer at the end of the first quarter of the Milwaukee Bucks’ first 2021 home preseason game. Lisa Byington, the Milwaukee Bucks’ new play-by-play broadcaster, made her Bucks broadcasting debut on Oct. 10, 2021. Though Byington’s broadcasting may not seem like a big deal to some, she is the first woman to ever have this job full time in the National Basketball Association (NBA), and is breaking the glass ceiling for future women in play-by-play sports broadcasting.

Although she is taking tremendous steps in a male-dominated industry, Byington wants to be known for more than just her gender.

The NBA is far from having equal gender representation, but Byington is contributing to the increase in women employees. According to a 2020 report by The Institute For Diversity and Ethics in Sports (TIDES), in the NBA, 26.6 percent of team vice presidents are women, 33 percent of team managers are women and 10.9 percent of chief executive officers (CEO)/Presidents are women. The percentage of women in NBA professional staff positions increased by 1.7 percent, going from 37.3 percent in 2018-2019, to 39 percent in 2019-2020. These percentages show that although the majority of NBA employees are male, women have still made huge strides.

Locally, senior Dessa Needham is demonstrating what values women can bring to male-dominated sports industries. Needham has been spending much of the school year interning with Redwood’s athletic trainer, Americ Alvarado. So far, she has been working with male athletes, and has an understanding of what it means to work in a male-dominated setting — whether that be helping on the football field during games, or taping players up before practice.

“I would say [the male athletes] are accepting of me working with them … I haven’t felt pushed away because I’m a female,” Needham said.

Needham believes that building a strong connection with athletes is something that comes naturally to many women and allows them to bring value to the sports industry in a variety of ways.

“This might be stereotypical, but I think females have an easier time connecting emotionally with other athletes, whether male or female,” Needham said. “I have noticed that through working with Americ … I’ve [gotten] to know a lot of [the players].”

Sydney Brodie is a point guard for the Redwood girls’ freshman basketball team, and is excited about what Byington’s hire means for young female athletes.

“One of the values [of Byington’s hire] is showing young girls that women can do the same thing men can do,” Brodie said.

Brodie has been playing basketball since the fourth grade for both Catholic Youth Organization (CYO) teams and her middle school team. In her free time, she enjoys watching the sport as well.

“I never see any women, it’s mostly men [working in the NBA]. It’s great that they’re creating an opportunity for women to start working,” Brodie said. “I read something in an article [that said,] ‘People are used to a man’s voice broadcasting,’ but it’s good to have both.”

Lauren Dunnigan, a Branson alum, grew up playing basketball and continues to engage in the sport by coaching her daughters’ CYO team, as well as previously being a volunteer assistant with the women’s basketball team at St. Mary’s College of California. Dunnigan was a four-year varsity basketball player, and continued her basketball career at Lewis and Clark College. She spent a majority of her basketball career being coached by men, and still notices unbalanced female representation in the NBA. Since Byington played both basketball and soccer at Northwestern University, Dunnigan is confident in Byington’s ability to perform in the workplace.

“I know that [college athletes in the workforce] know how to work hard, be determined, persevere and be a team player. They can roll with the punches; this flexibility and agility that gets brought [to the table] is an amazing asset … it is undervalued and it is so well received,” Dunnigan said.

As more women are hired for sports-oriented jobs both in and out of the NBA, Dunnigan hopes that people see the value in women’s opinions and work ethic.

“These women who are walking the walk and setting the tone for everybody else are going to give [women] more opportunities to broaden the scope for everybody,” Dunnigan said.